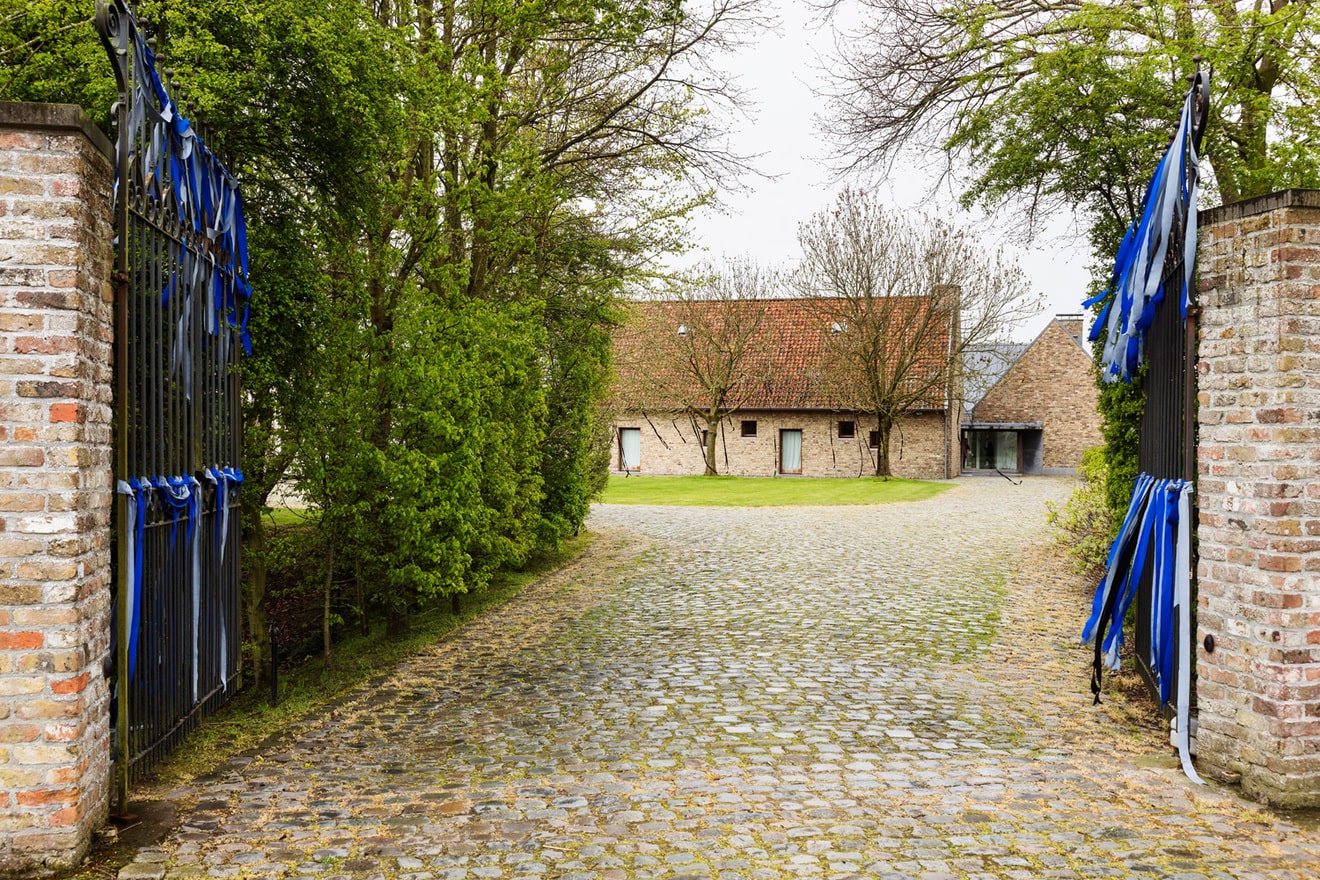 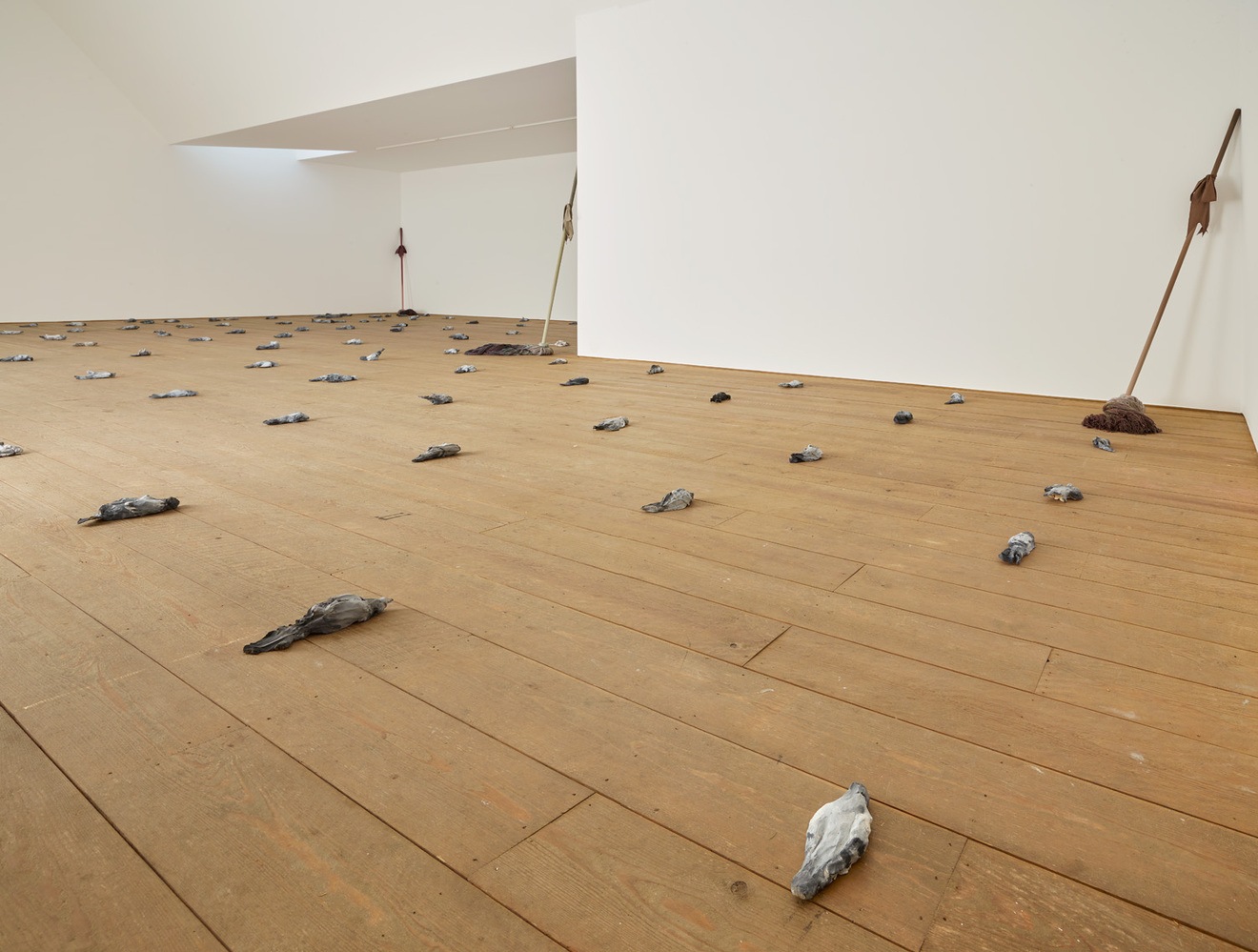 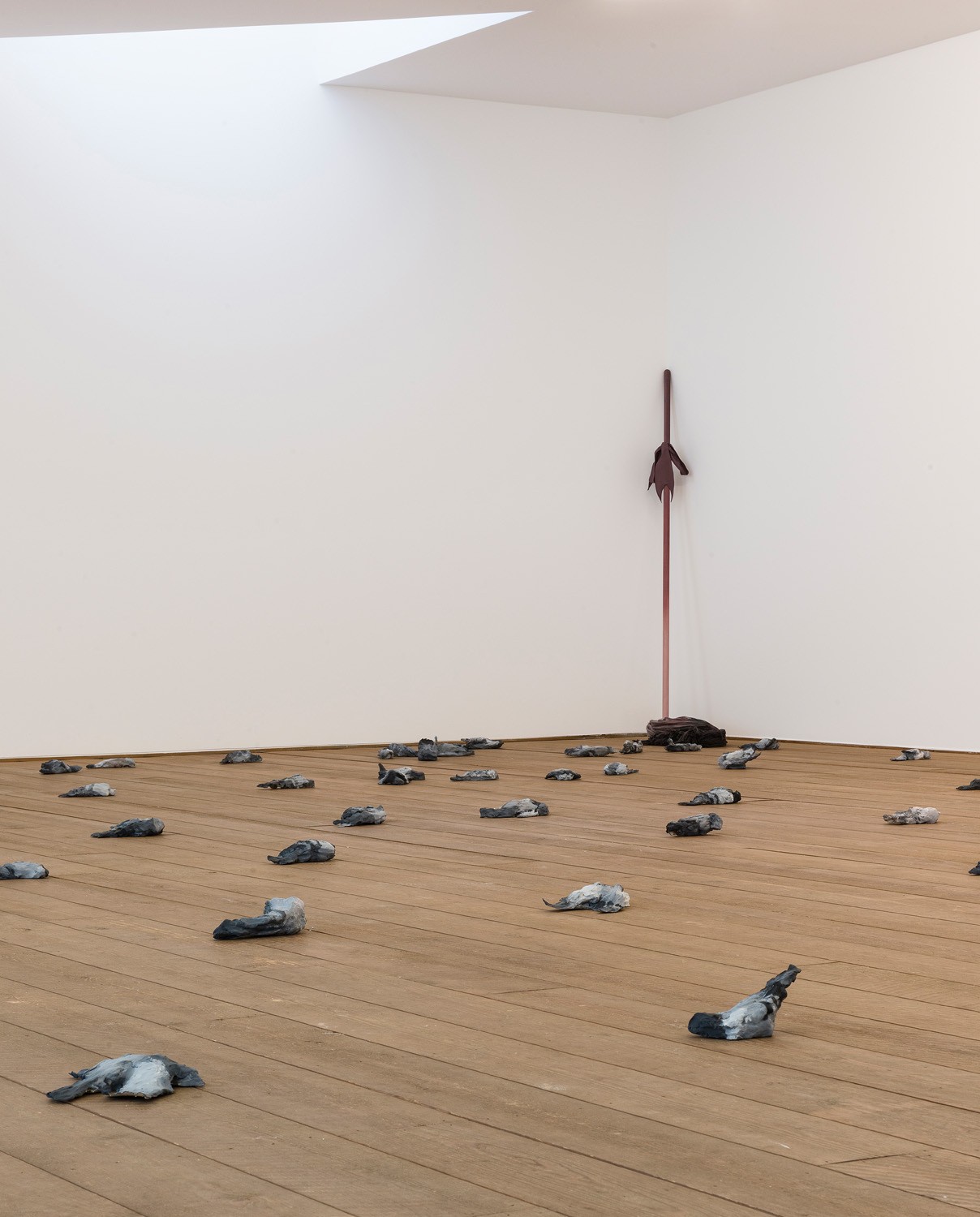 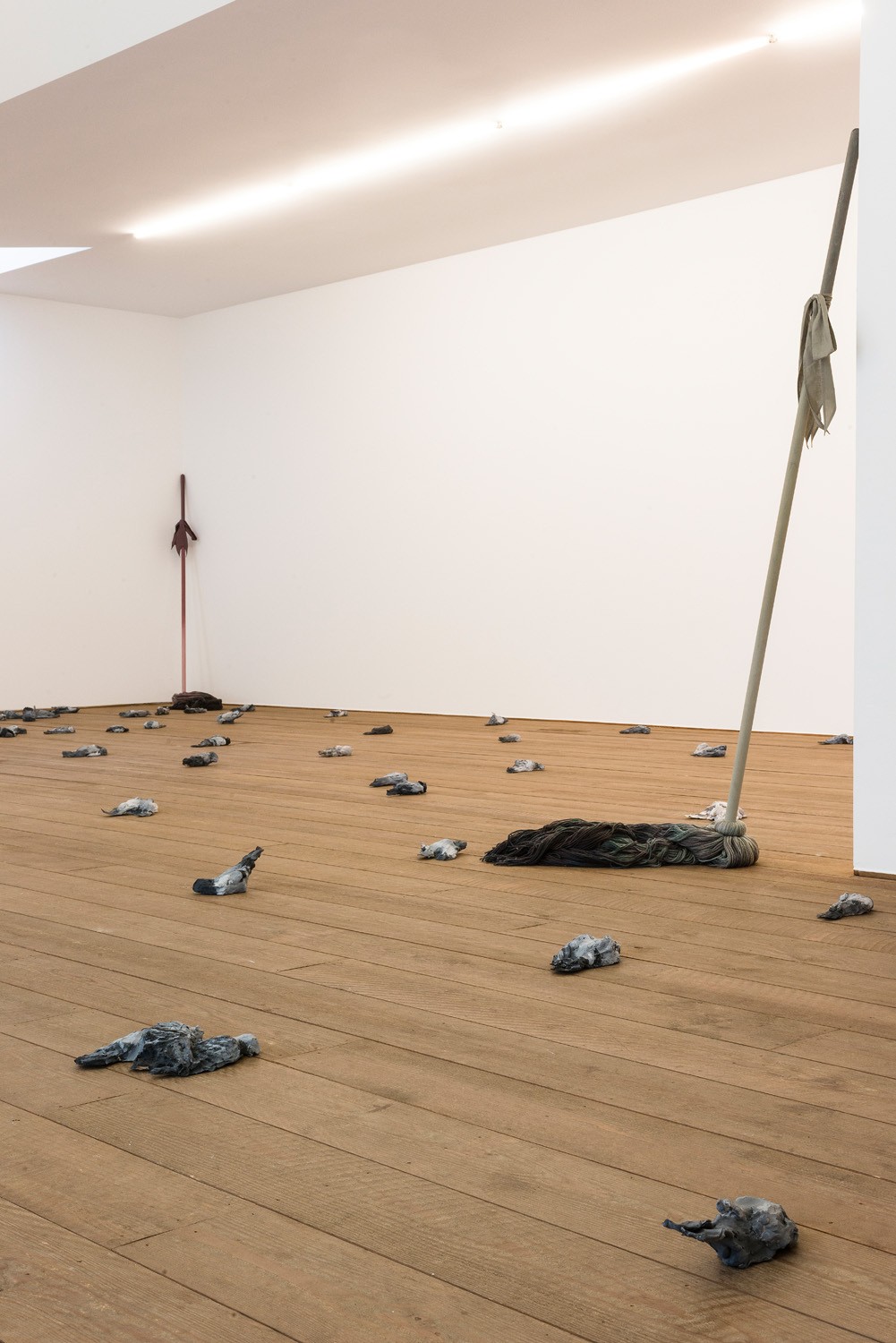 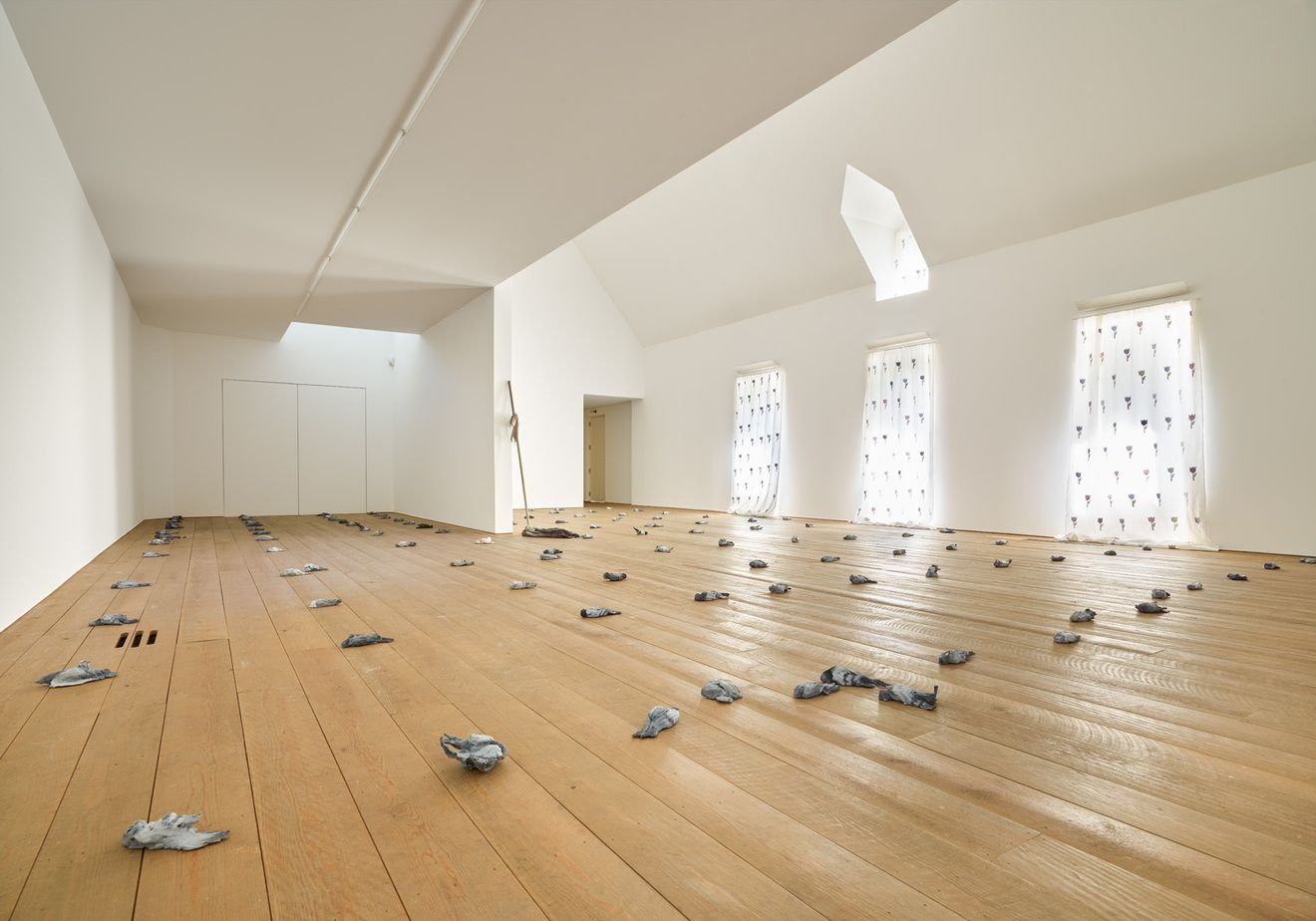 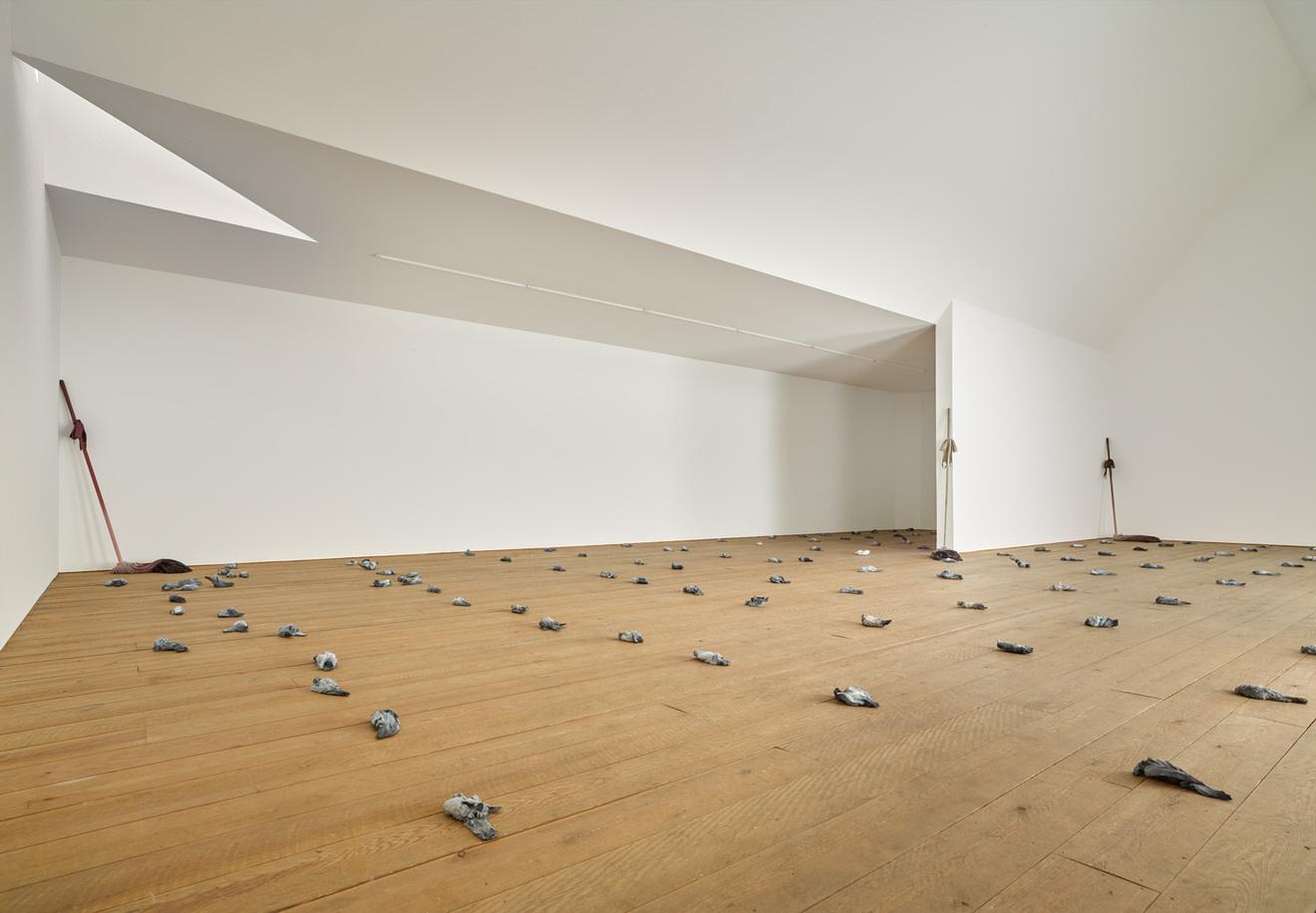 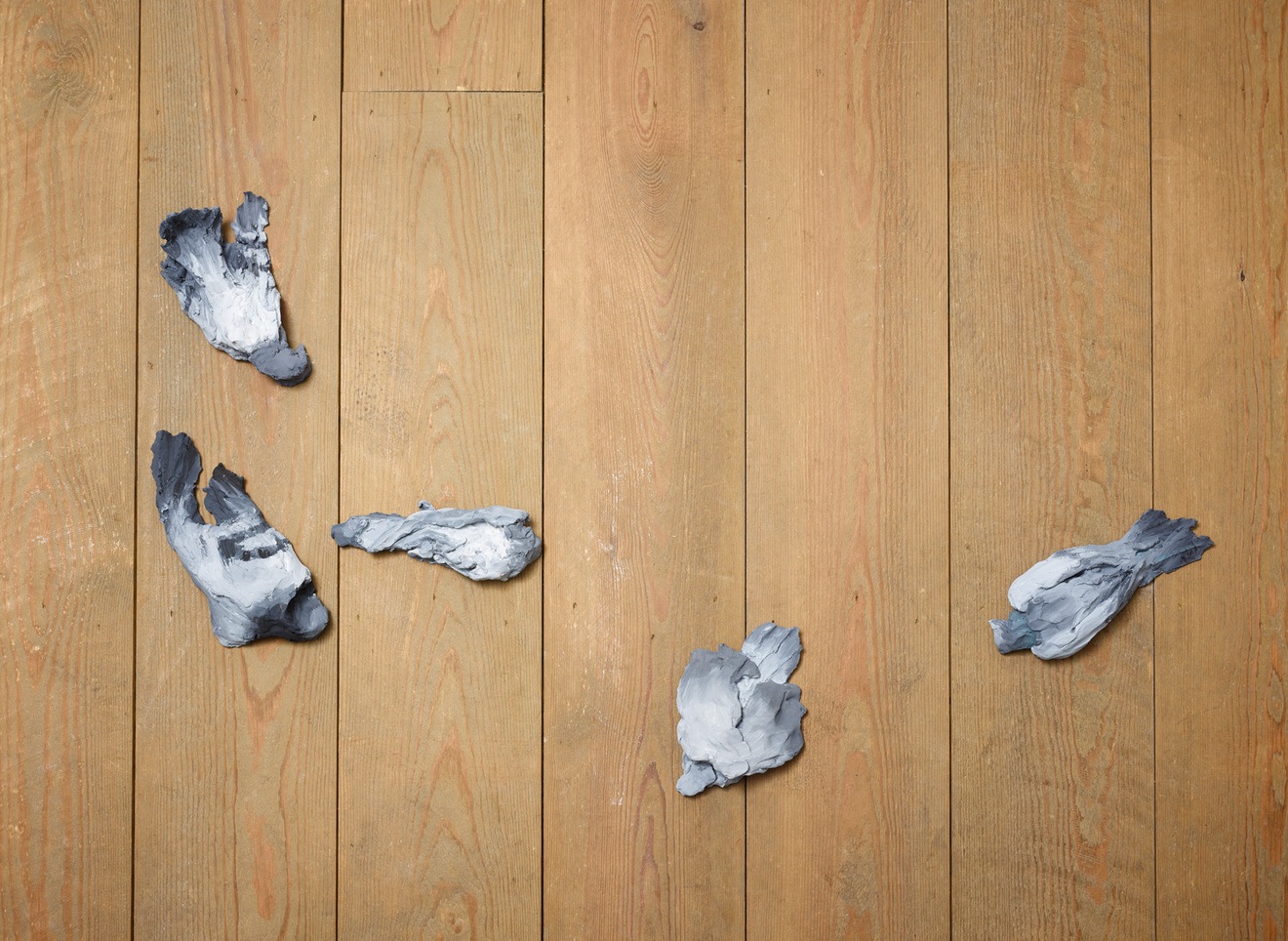 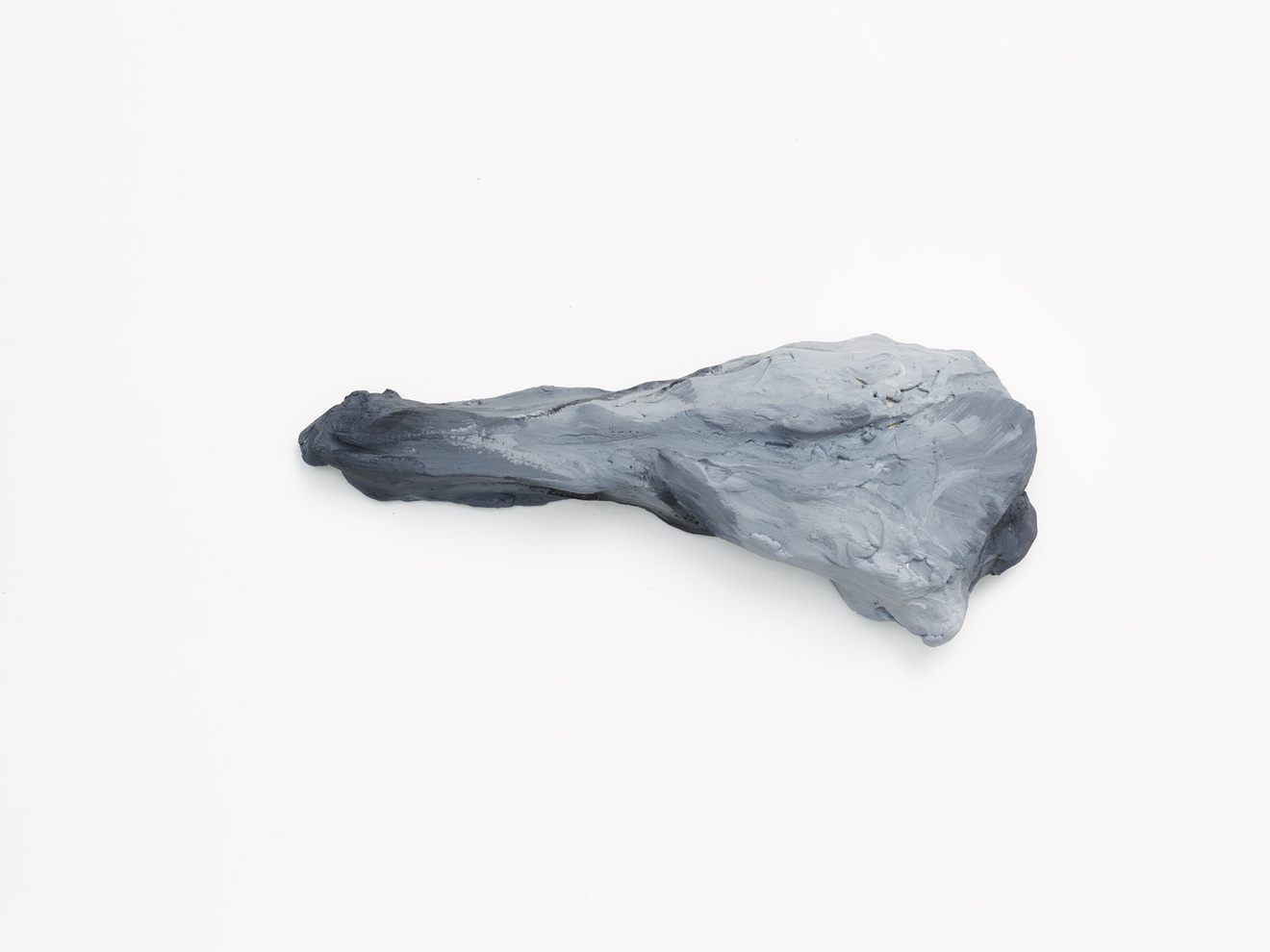 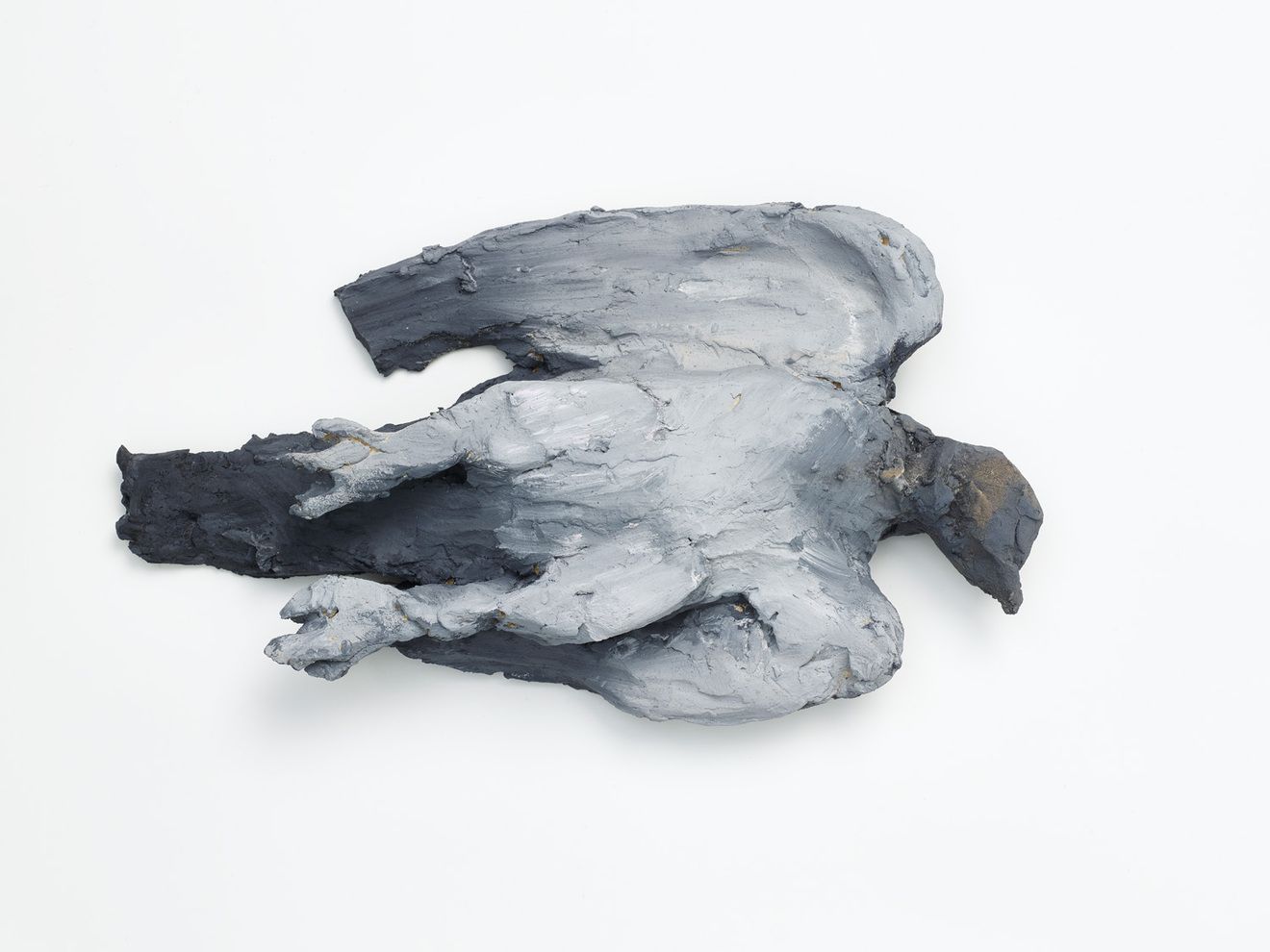 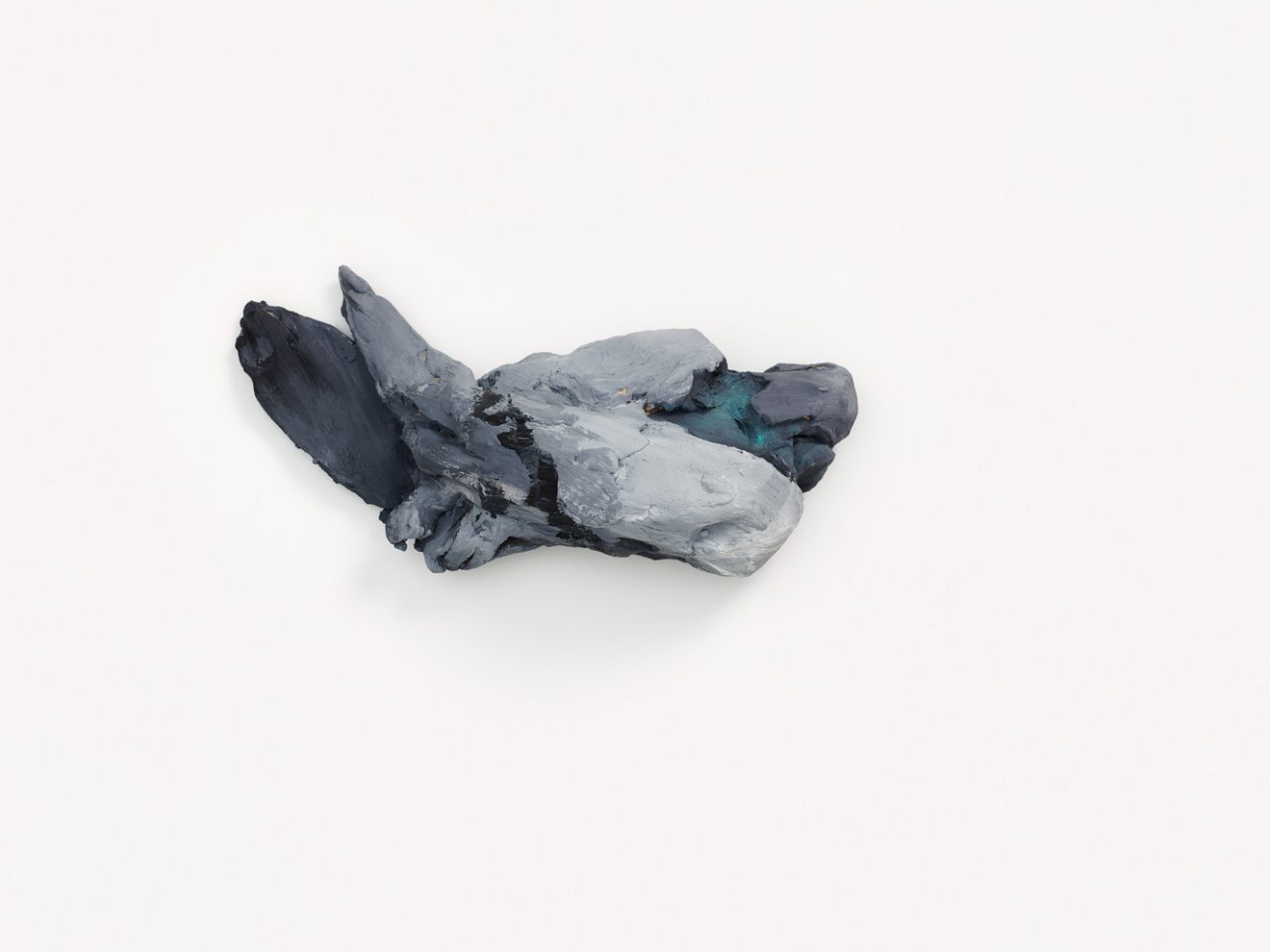 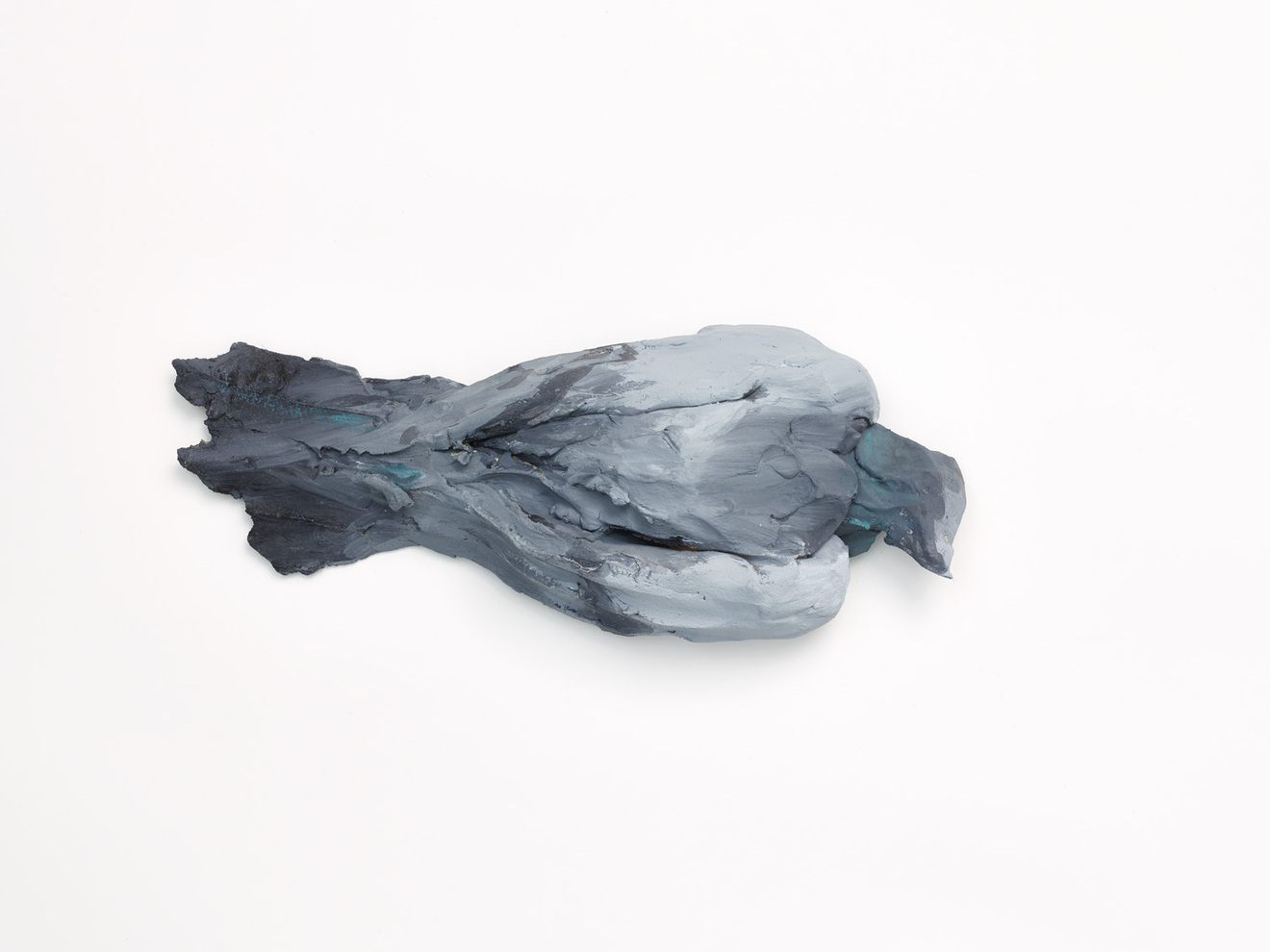 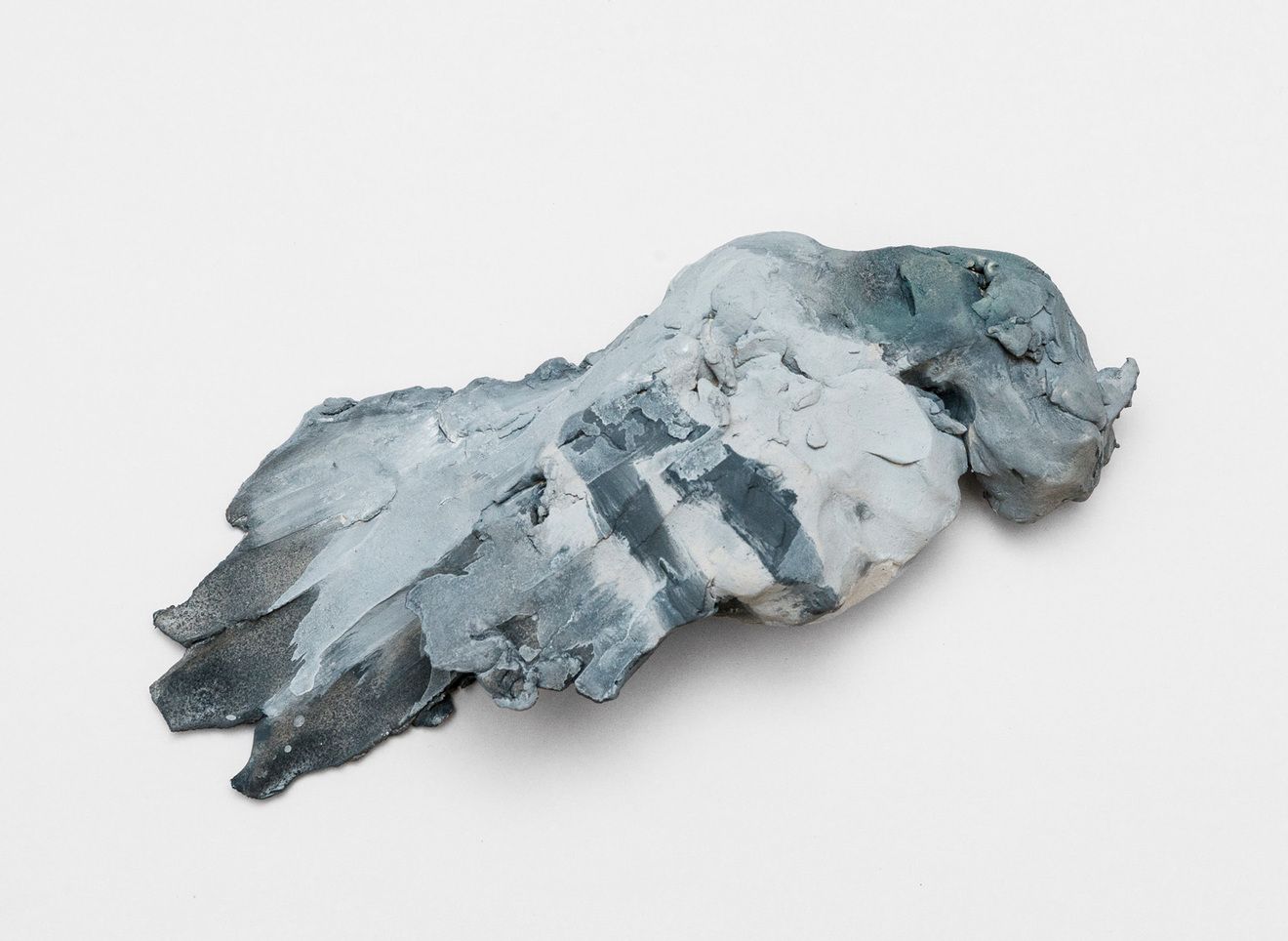 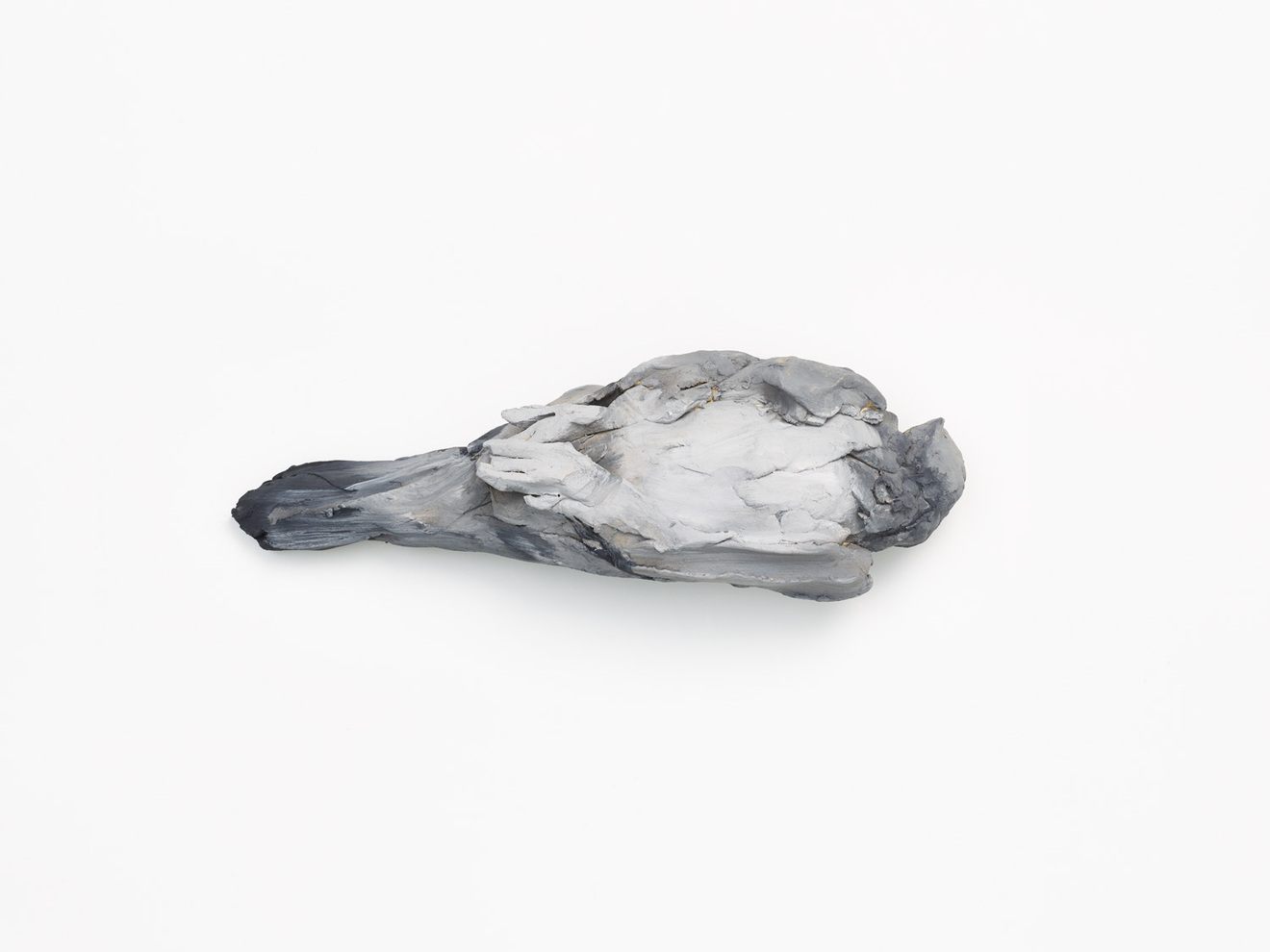 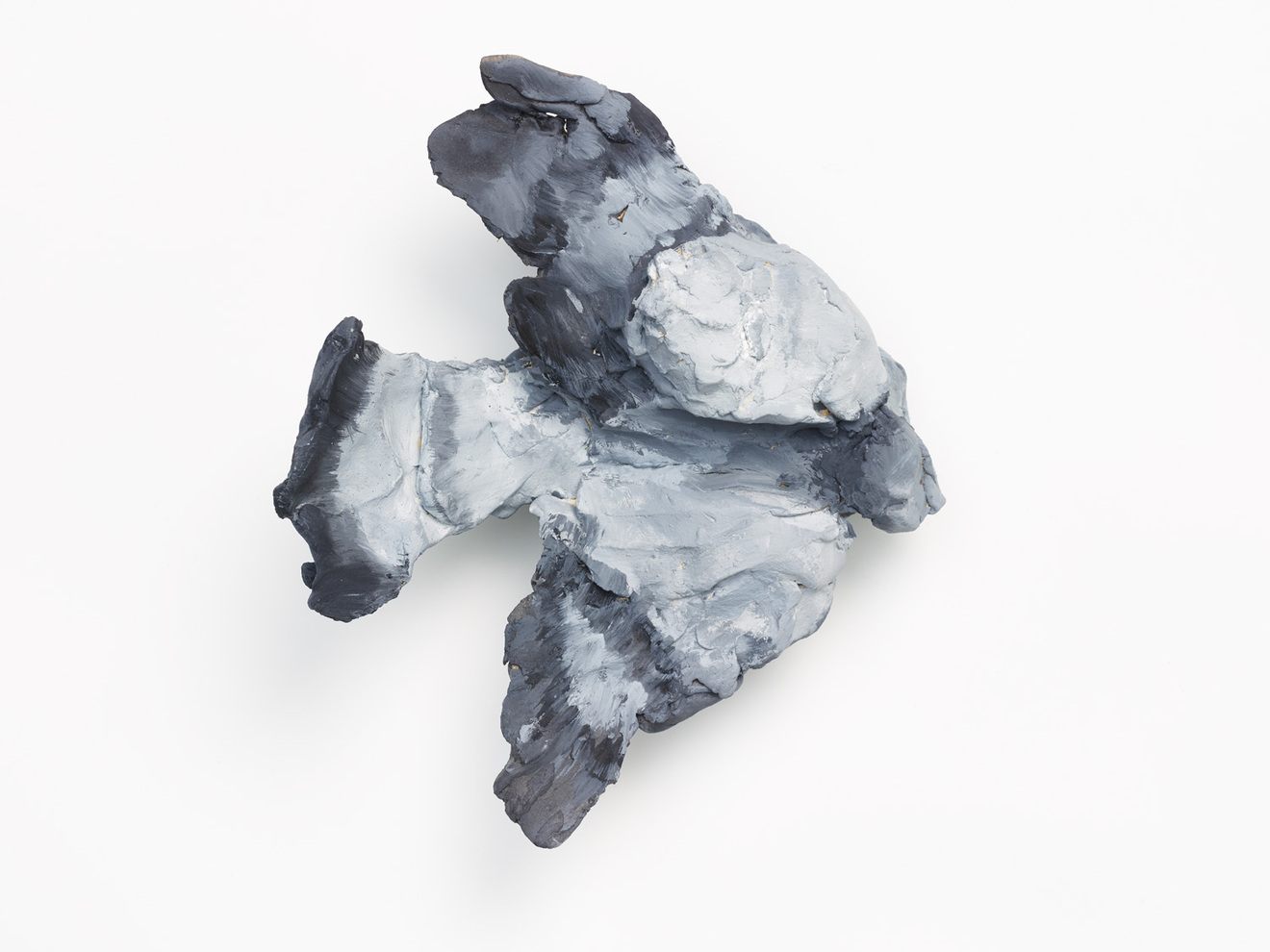 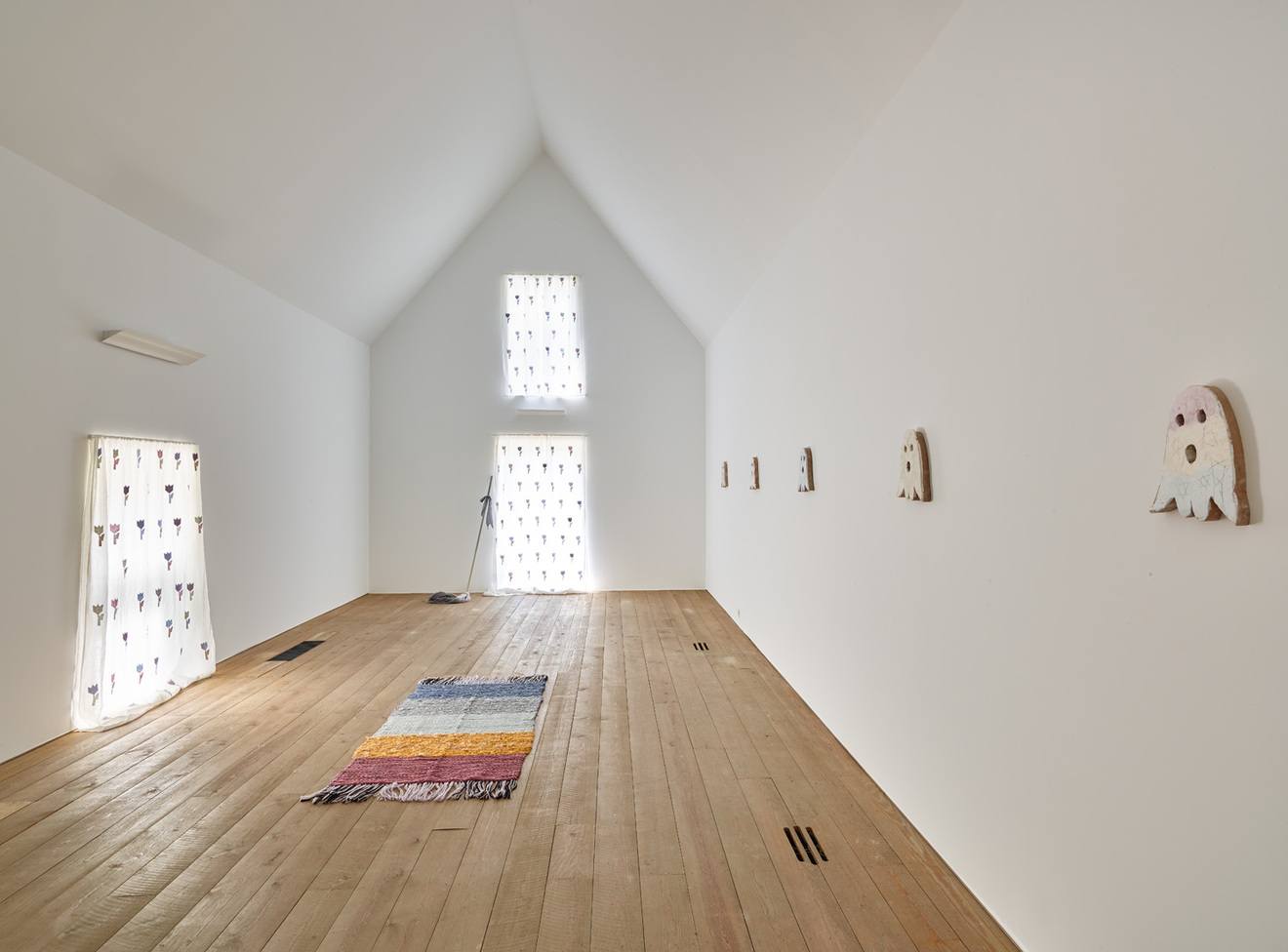 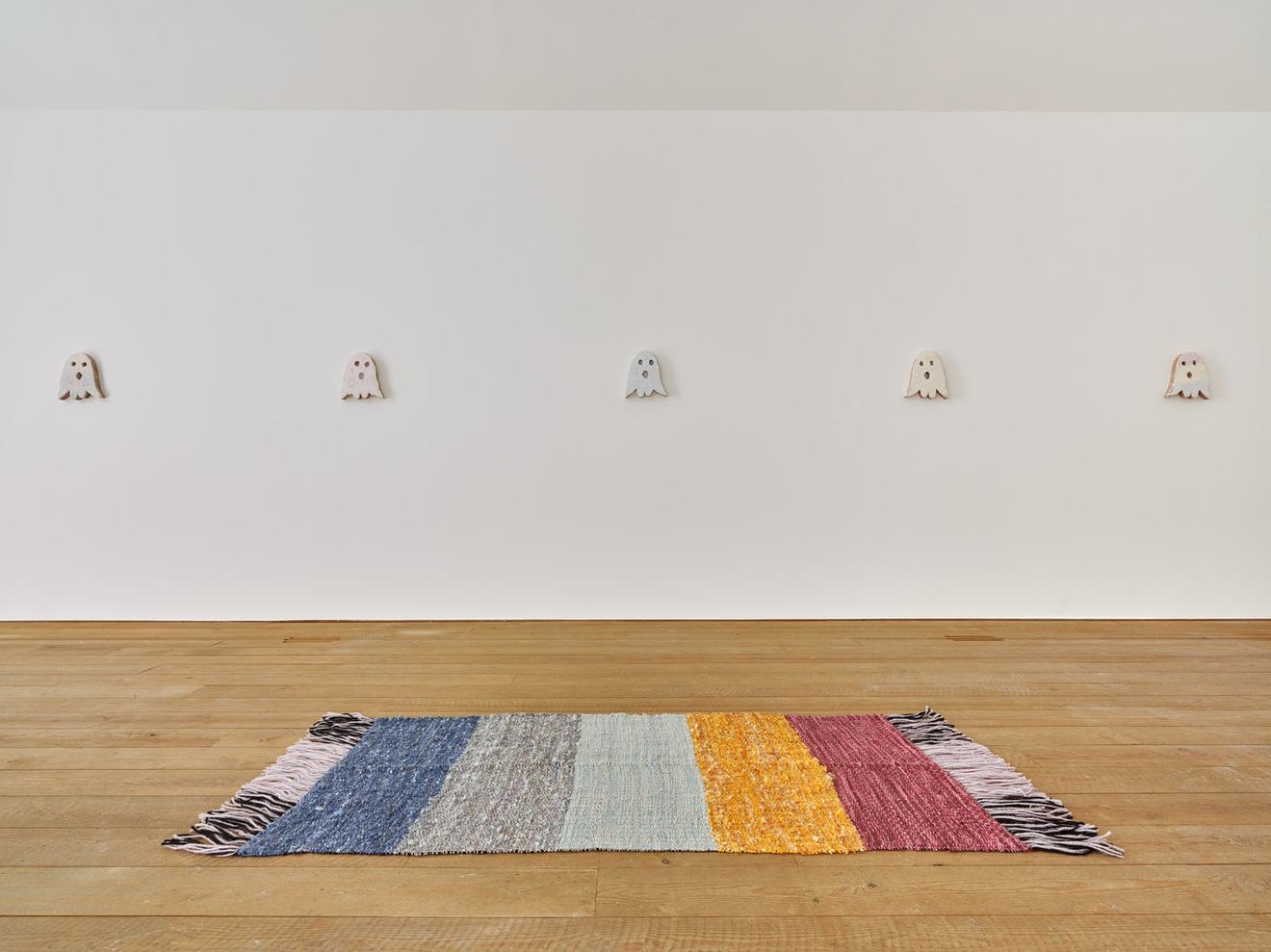 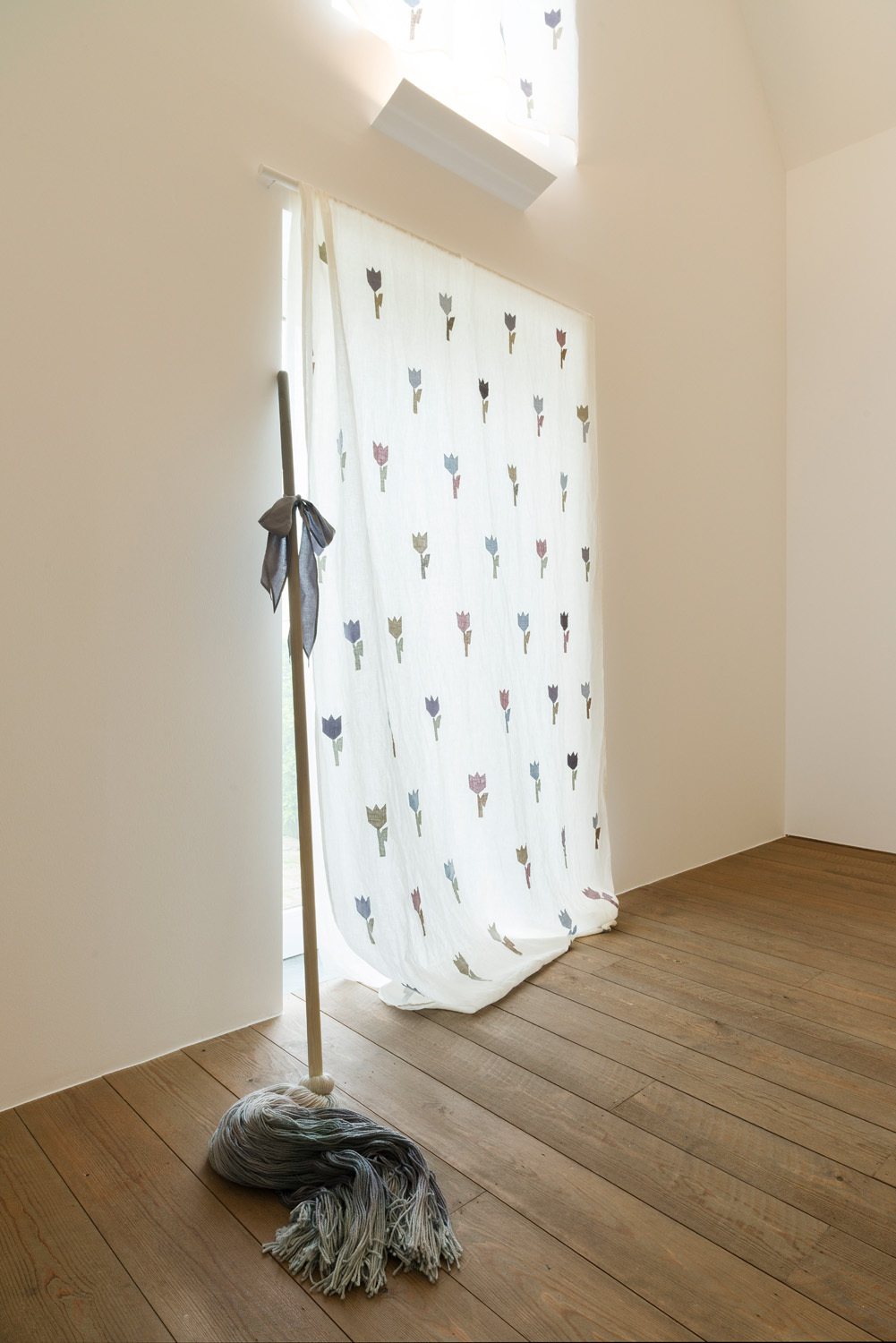 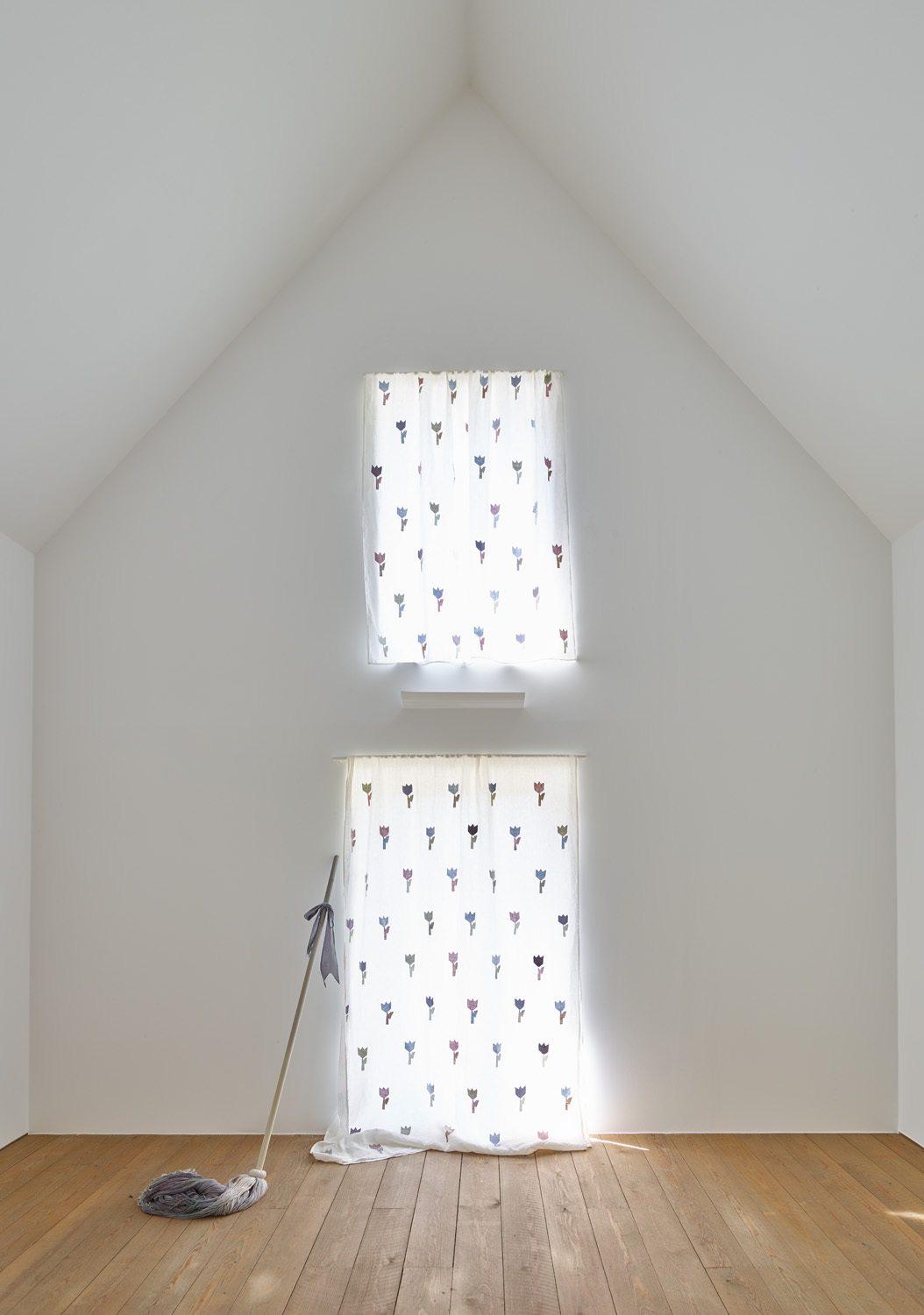 Co-curated by Simon Castets and Hans Ulrich Obrist for 89plus

The exhibition title comes from the young adult book ‘Wringer’ by Jerry Spinelli, which tells the coming-of-age story of a boy refusing a small town’s tradition of pigeon shooting and the subsequent ‘wringing’ of the necks of pigeons to ensure death.
For Foundation ‘De 11 Lijnen’ Rogers has created a sculptural installation composed of ceramic pigeons displayed on the gallery floor. Alongside specially made curtains and flags, the exhibition includes five new mops using different colour variations with specially dyed grey yarn. The artist explains: ‘The mops exemplify ideas of grey morality, a lens in which to see the world, and the definition of grey itself. Grey is the most important and all encompassing shade, the absence of what is distinguishable—the dissolution of that which is representable.’
Rogers’ recent works have contemplated household mops as ‘erasers’, wiping away dirt from the floor, and as symbols of mourning, holding the burden and weight of water, absorbing tears that flow over the fibers’ capacity. The exhibition is also a continuation of Rogers’ previous meditations on erasers. Her recent exhibition ‘jrasjr’, presented as part of the 89plus-curated section of ‘Co-Workers: Network as Artist’ at Musée d’Art Moderne de la Ville de Paris, played on the word ‘eraser’ and the name ‘Jasper’. The title of the new exhibition continues this letter erasure wordplay with the letter ‘j’.

Bunny Rogers (b. 1990, Houston, TX, USA) is a poet and artist based in New York City. She is the author of Cunny Poem: Vol 1 (2014) and My Apologies Accepted (2014), and her writing has appeared in Mousse and Art Forum. Recent exhibitions include a solo show ‘Columbine Library’ at Société, Berlin; and some group shows ‘Welcome You’re in the Right Place’ at Sandretto Re Rebaudengo Foundation, Turin, ‘The Heart is a Lonely Hunter’ at YARAT Contemporary Art Centre, Baku and ‘Anagramma’ at Basement, Rome curated by CURA amongst others. Recent exhibitions include a solo show at Société, and ‘Unorthodox’, a group show at the Jewish Museum, New York.
Rogers first participated in the 89plus project when she presented and discussed her work with Simon Castets, Hans Ulrich Obrist, Klaus Biesenbach and Jenny Schlenzka, as part of the 89plus Colony Conference at ‘Expo 1: New York’, at MoMA PS1 in 2013. Since then, her work has been included in several 89plus projects, including: the 89plus edition of Prospectif Cinéma at the Centre Pompidou, Paris, 2015; ‘Poetry will be made by all!’ as part of ‘After Babel’ at Moderna Museet, Stockholm, 2015; and ‘Filter Bubble’ at LUMA Westbau, Zürich, 2015–16. Most recently, Rogers presented a solo show as part of the 89plus-curated section of the exhibition, ‘Co-Workers’, at the Musée d’Art Moderne de la Ville de Paris, 2015–16. Bunny Rogers is part of the first generation of artists who grew up with the Internet as part of everyday life. Her work is not specific to a medium, since she makes sculpture, installation, video, animation, etc., but rather is produced at certain points through digital processes (3D modelling, video editing, Second Life photography) and is in part exhibited and distributed through the internet. Moreover, her works show a frequent use of elements and tools borrowed from her online presence. In her work, Bunny Rogers threads together uncanny representations of cultural icons, revealing something intimate about herself in the process. At the same time, she exposes societal norms and cultural memory for what they are: collective and constructed.

About 89plus
89plus is a long-term, multi-platform research project, co-founded and co-curated by Simon Castets and Hans Ulrich Obrist, which investigates innovative work by the generation born in and after 1989. Simon Castets is Director and Curator, Swiss Institute / Contemporary Art, New York, and Co-founder of 89plus. Hans Ulrich Obrist is Co-director, Exhibitions and Programmes and Director of International Projects, Serpentine Galleries, London, and Co-founder of 89plus. 89plus manifests through panels, books, periodicals, exhibitions and residencies, bringing together individuals from a generation whose voices are only starting to be heard, yet account for almost half of the world’s population. Marked by several paradigm-shifting events, the year 1989 saw the collapse of the Berlin Wall and the introduction of the World Wide Web. Positing a relationship between these world-changing events and creative production at large, 89plus introduces the work of some of this generation’s most inspiring protagonists. Since an introductory panel held in January 2013 at the DLD Conference, 89plus has conducted research and held events in 18 countries across 6 continents, and worked with over 300 practitioners born in and after 1989. More at 89plus.com.