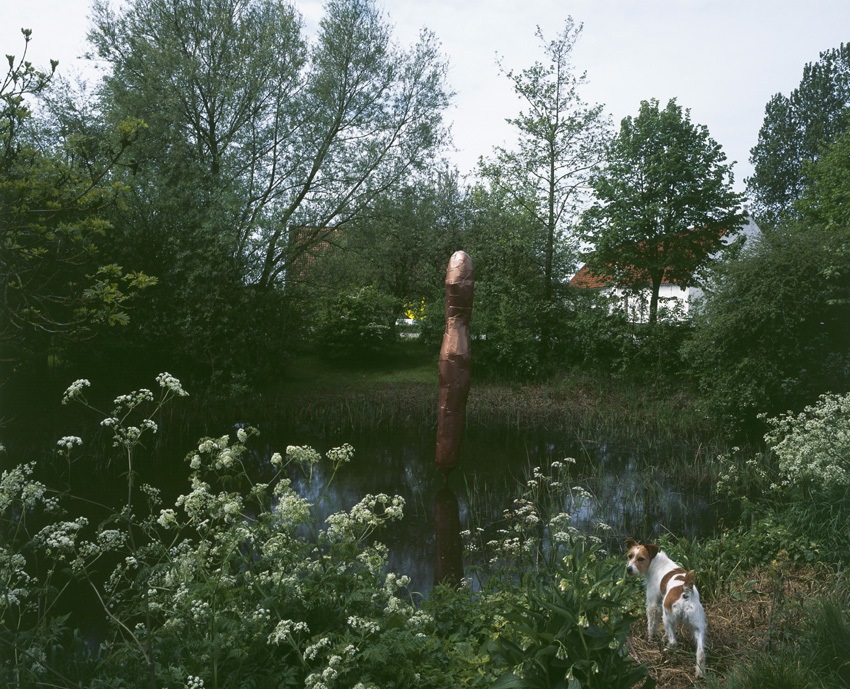 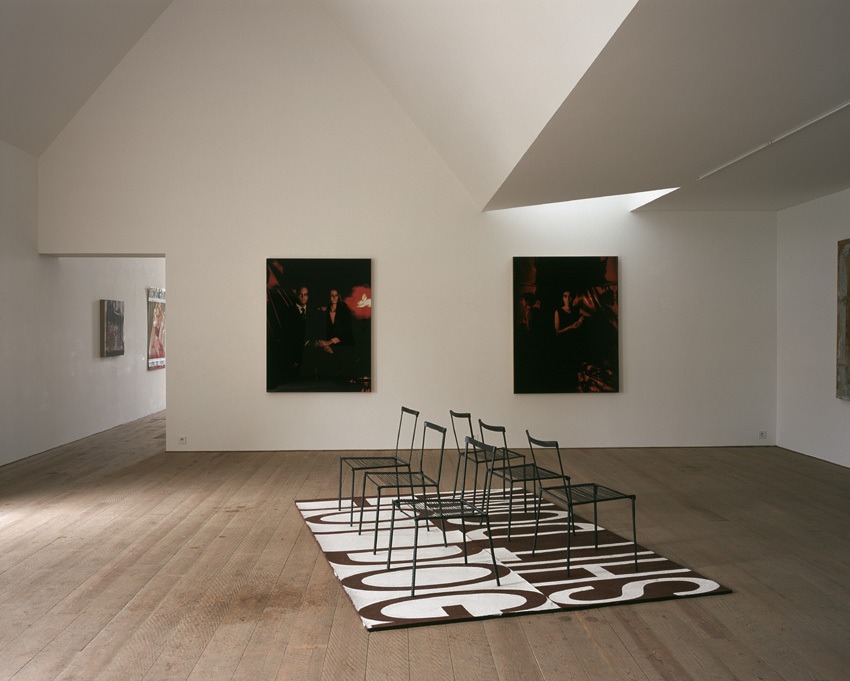 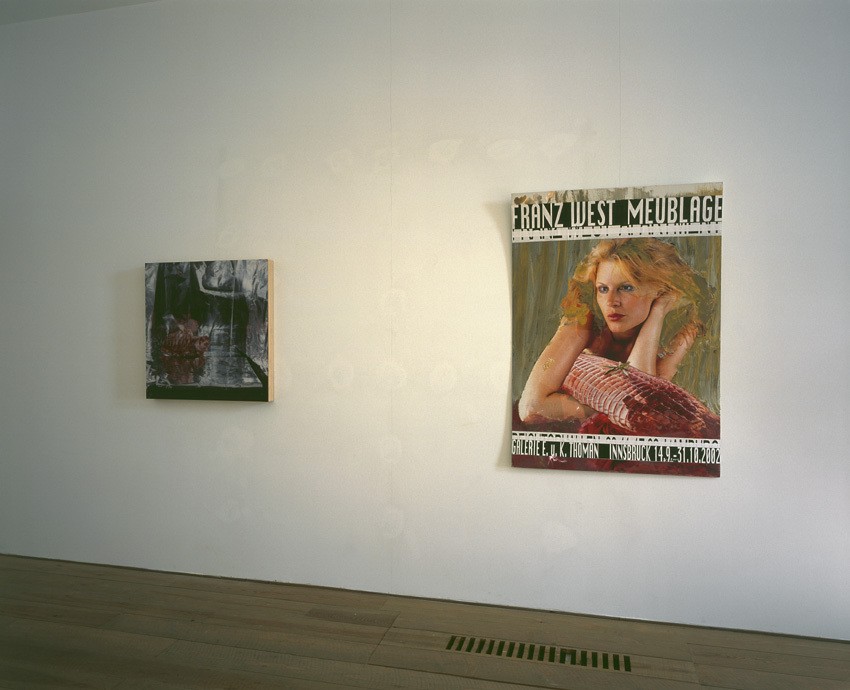 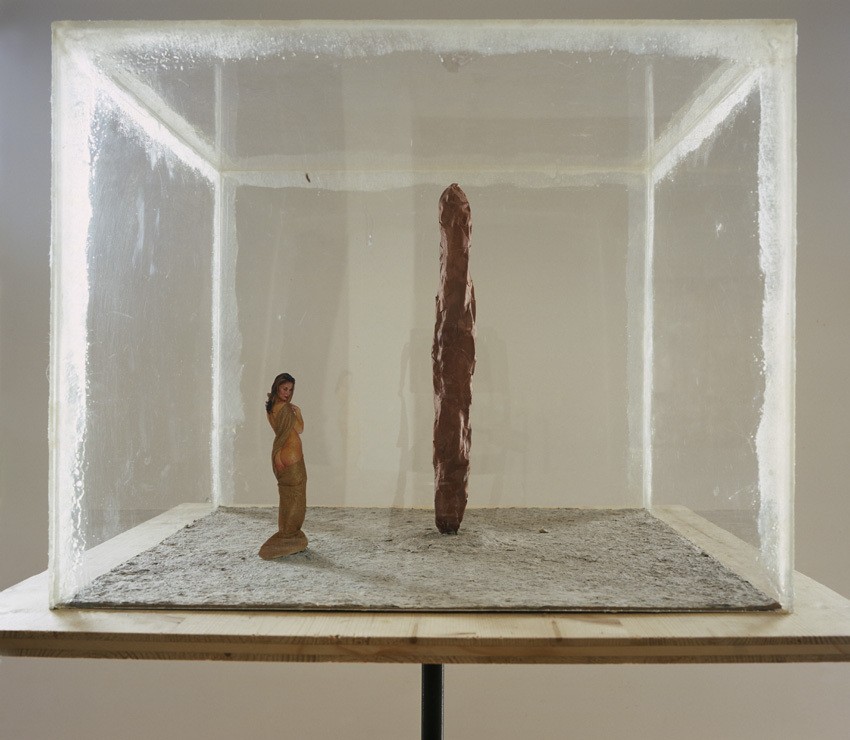 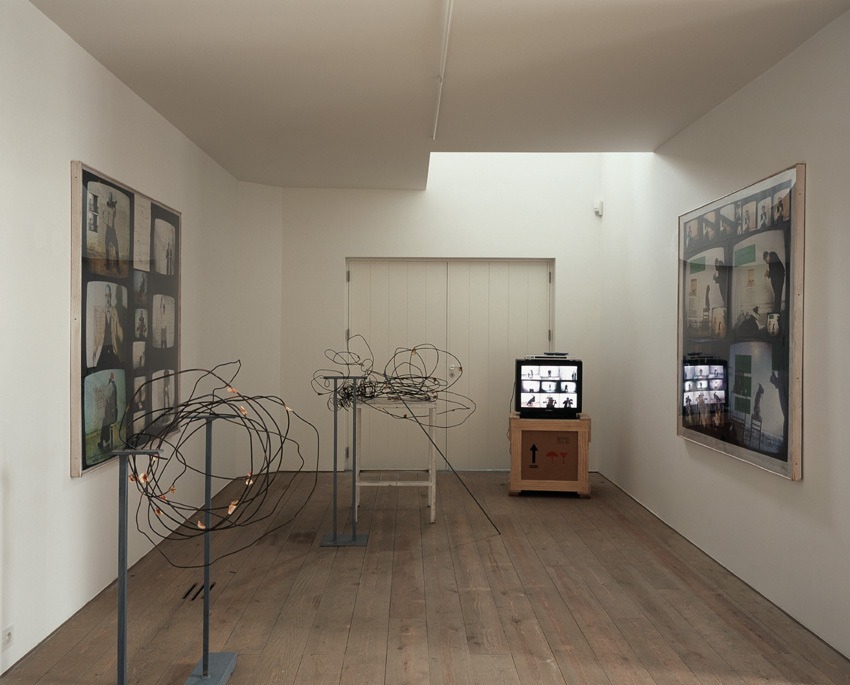 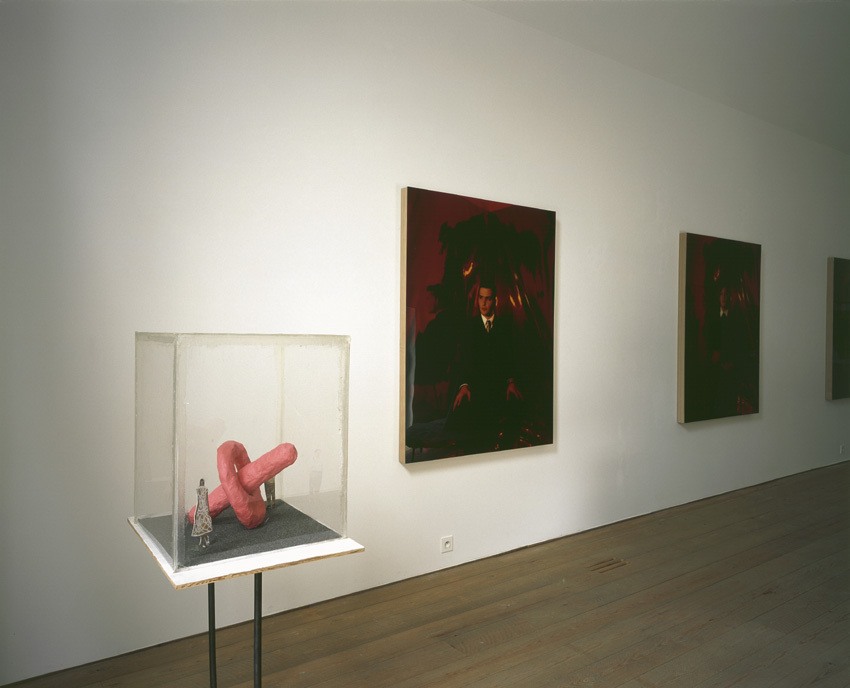 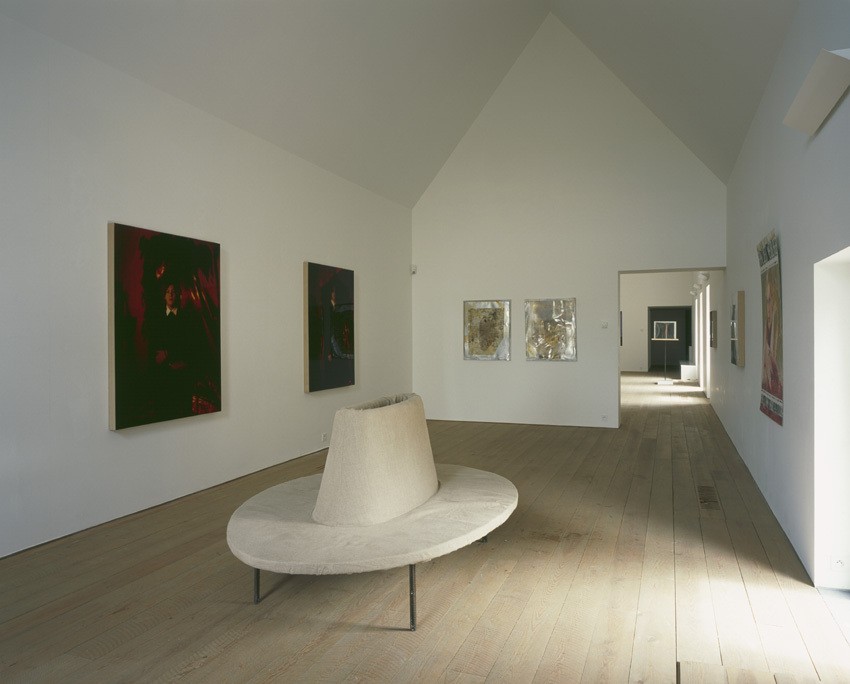 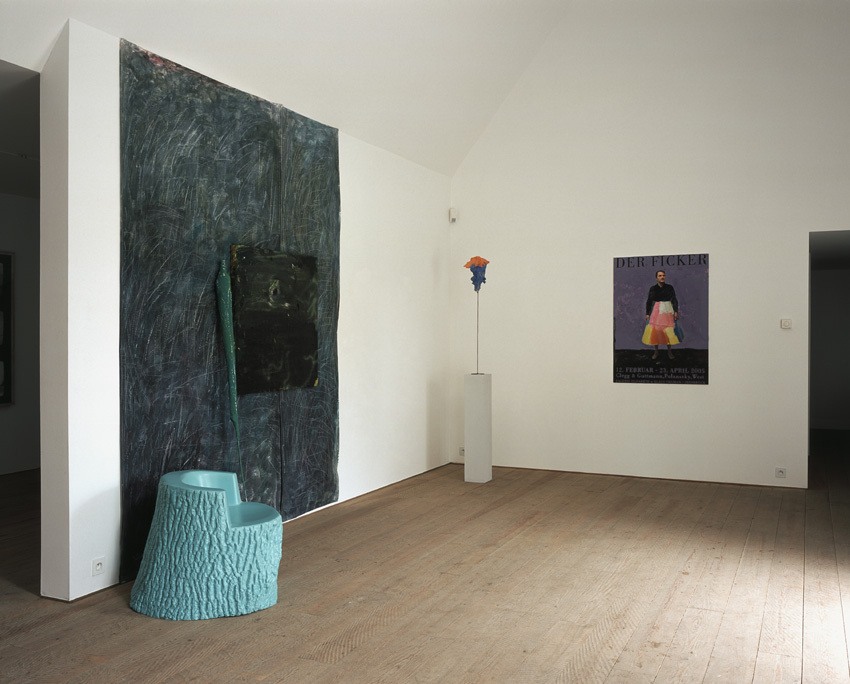 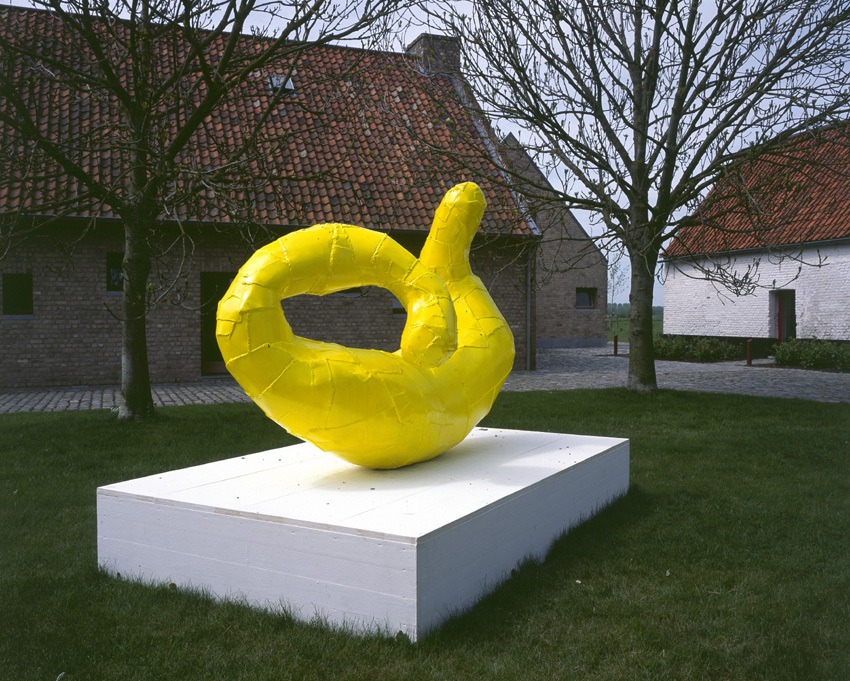 The exhibition and the book entitled ‘Der Ficker’ are an act of homage. It is part of Franz West’s artistic worldview to try and bring forth an imaginative reaction not only in the observers and the users of his artworks (fitted pieces, furniture, etc.). He shares his thinking with those around him, develop artistic ideas while communicating with others. and encourages gallerist, artists and thinkers to become active themselves. This group of people – Clegg & Guttmann, Jörg Heiser, Benedikt Ledebur, Rudolf Polanszky, Johannes Schlebrügge, Klaus Thoman, Franz West – have come together over the space of a year and brought this exhibition.
With the exhibition title and the presentation of the book that will be published on the occasion by Schlebrügge Editor, the artists refer to the Innsbruch writer and publisher Ludwig van Ficker (1880-1967). In 1910 the latter founded ‘Der Brenner’ magazine which he also edited until 1954. He kept in close contact with many renowned artists and thinkers of his time, such as Karl Kraus, Oskar Kokoschka, Adolf Loos, Rainer Maria Rilke, Else Lasker Schüler and Georg Trakl, artists whose careers he also advanced as a patron. It is well known, for instance, that Ludwig Wittgenstein bequeathed a donation and asked him to distribute the funds. Karl Kraus famously remarked on the magazine: “That the only truly honest Austrian review appears in Innsbruck one should know, if not in Austria, at least in Germany, whose only truly honest review also appears in Innsbruck.” The ironical reference to a magazine and its editor may yet contain the grave admonition that a town should remember its cultural achievements in a timely fashion and, wherever possible, surpass them.
This exhibition shall not only give visitors the opportunity to enter into a dialogue with the works presented and the potential space of their mutual connotations, but itself also endeavours to reach out the cultural setting of Innsbruck. Thus, it shows a series of portraits by Clegg & Guttmann that were created in Innsbruck and a group of their famous ‘Flesh’ photographs; a number of large panels from Rudofl Polanszky’s ‘Reconstructions’ series (1996-2004), as well as videos, stills montages, and ensembles from his fundamental investigations (Der musikalische Affe), Franz West contributes objects presenting well-know and more recent aluminium sculptures “collaged” as models and new sculptures.

Michael Clegg (°1957 in Jerusalem) and Martin Guttmann (°1957 in Dublin) live in New York and Vienna. They started their collaboration in 1980. Since then, they have had hundreds of exhibitions in U.S.A., Germany, France, Italy, Austria, Japan and in other countries. Their work is in the collection of the Whitney Museum, the Beaubourg, the Stadtgalerie Stuttgart to name a few. They took part in the documenta, the Whitney Biennial, the Venice Biennale and in other international exhibitions. During the years they made a large number of outdoor artworks, most recently in Hamburg, Berlin ans Krems (Lower Austria). Solo exhibitions 2006: Secession, Vienna, Kunstverein Braunschweig, Cornerhouse Manchester.

Rudolf Polanszky (°1951 in Vienna). He spent his childhood and youth in Vienna and all over Austria. Since 1971 he has lived mainly in Vienna and nearby. Besides various studies and travels, his interest lies in art and its theoretical aspects as well as in problems of permanent self-invention. Since Schweinsfettzeichnungen [lard drawings] and the film Zu einer Semiologie der Sinne [On a semiology of the senses], both in 1976, he has worked as an artist; few public appearances, apart from which he is a private individual.

Franz West (°1947 in Vienna) lives and works in Vienna. West, without a doubt, is one of the most important artists of our day and age. For three decades now his oeuvre has had a significant impact on the development of contemporary art.
Most characteristic for West’s modus operandi are his Passstücke (Fitted Pieces), produced for the first time in 1974, the Möbelskulpturen (furniture sculptures) from 1985 onwards, and the Aluskulpturen (aluminium scupltures) since 2000. A sculpural element is turned into an object only made complete by its being used, as it were. West thus introduces a new definition of the term sculpture. He contrasts the autonomous, self-contained work we are familiar with from art history with the interactive instrument ultimately, and each time anew, finished as a work of art by the observer/user handling it.
Since 1970 international exhibitions in galleries and museums, e.g. Documenta IX (1992), Documenta X (1997), Sculpture Project Münster (1997), Venice Biennial (1988, 1993, 1997, 2003); Lincoln Center & Doris C. Freedman Plaza, New York (2004), Whitechapel Gallery, London (2003), Museo Nacional de Arte Reina Sofia, Madrid (2001), Museum of Modern Art, New York (1997). From 1997 onwards in close cooperation with the Gallery Elisabeth & Klaus oman, Innsburck: Franz West – Stühle für die documenta X (1997), Sculptura Austriae (1998), Franz West Die Alu- skulptur, Skulptur im Schlosspark Ambras (2000), U.A. West (2000), Best of (2001), Unter freiem Himmel, Skulptur im Schlosspark Ambras (2001/02), Franz West Meu- blage/Musique de Meublement (2002), Der Ficker Clegg & Guttmann Rudolf Polanszky Franz West (2005).