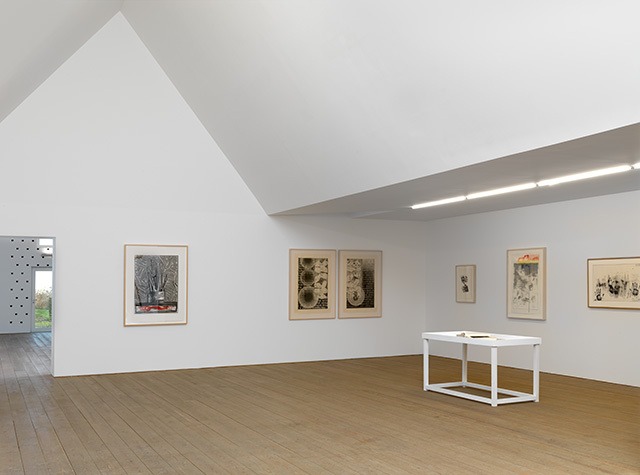 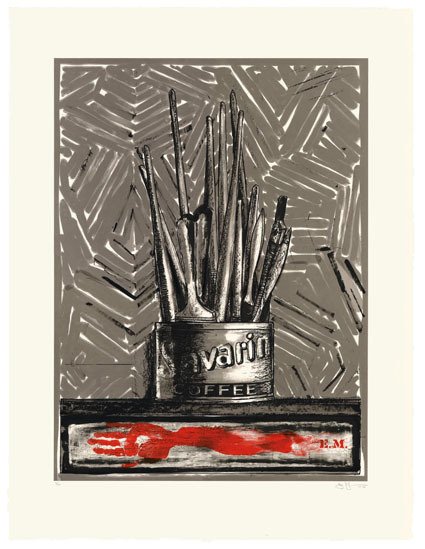 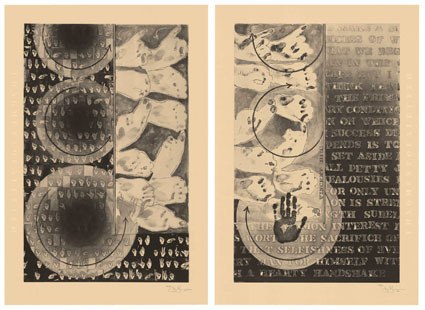 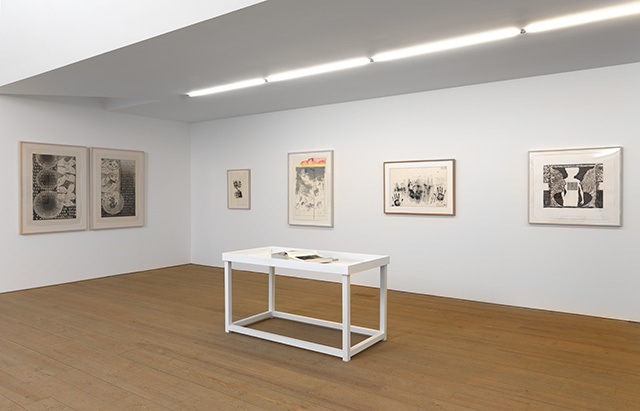 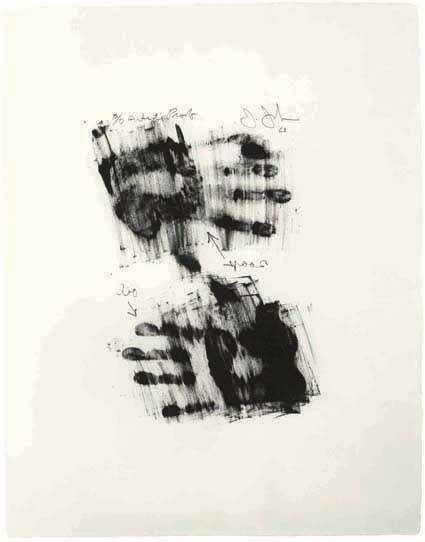 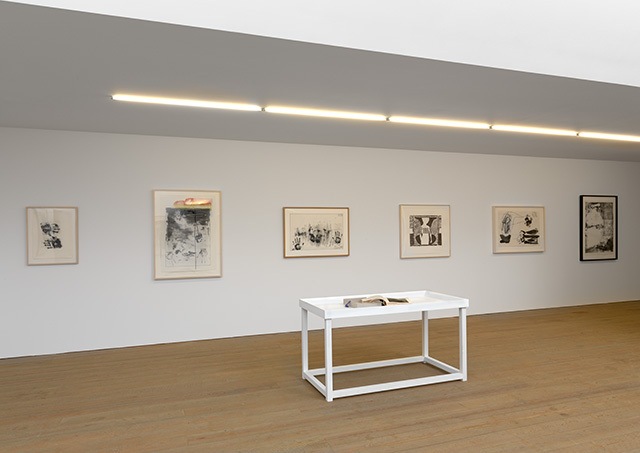 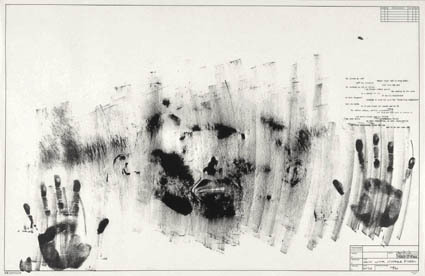 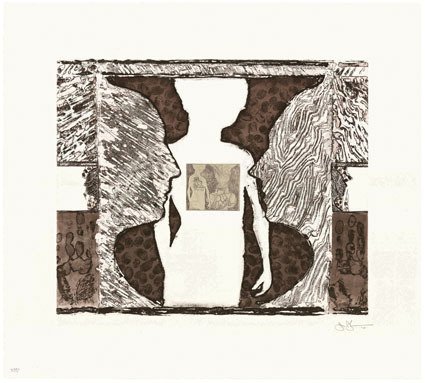 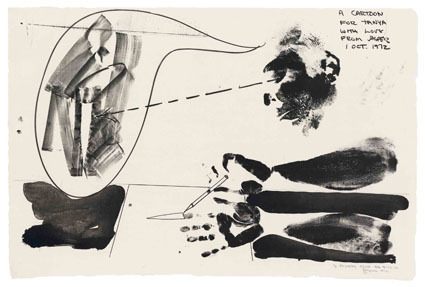 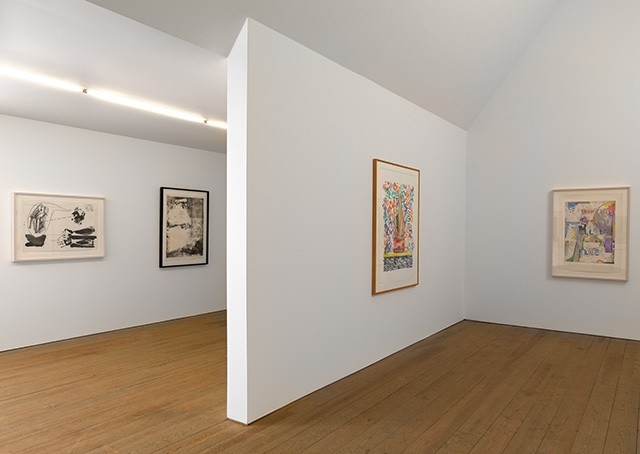 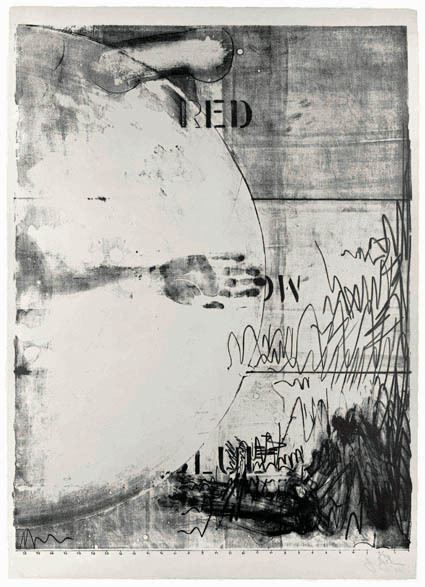 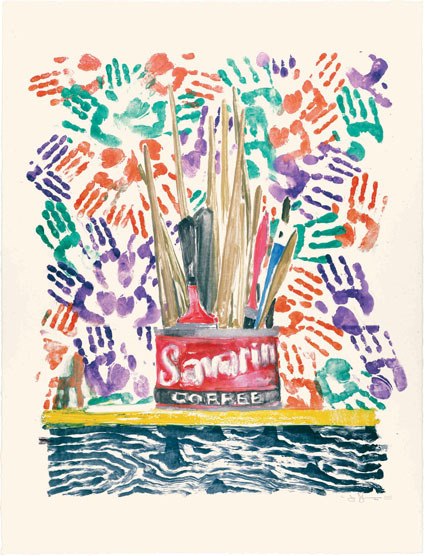 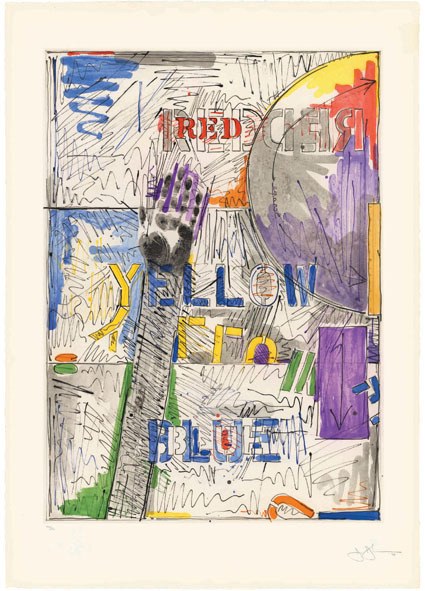 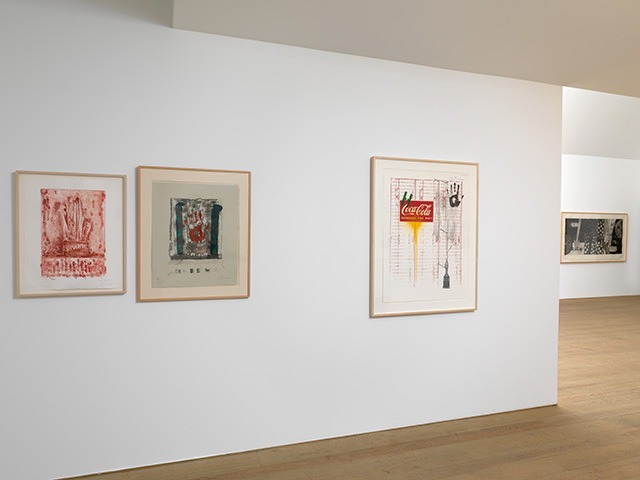 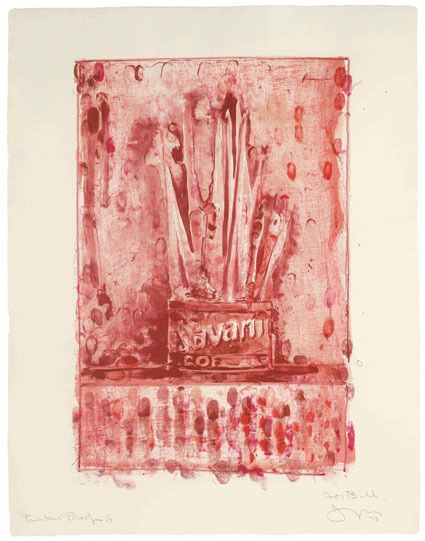 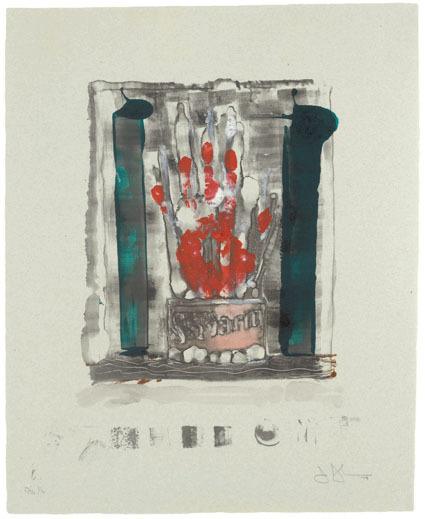 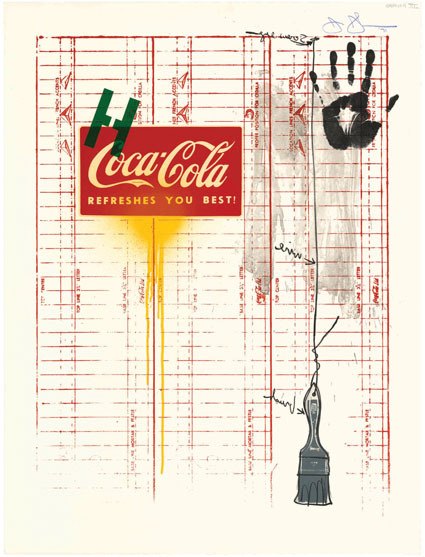 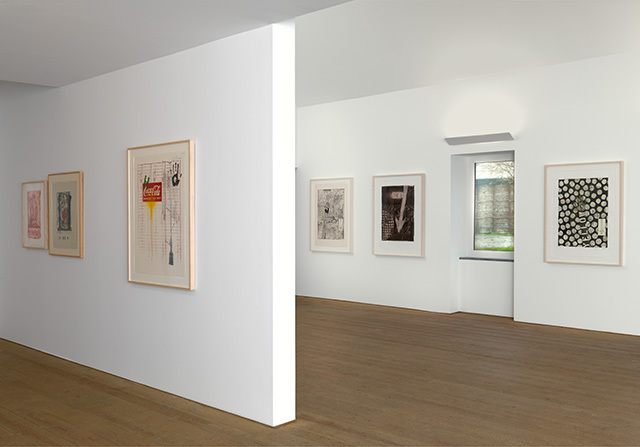 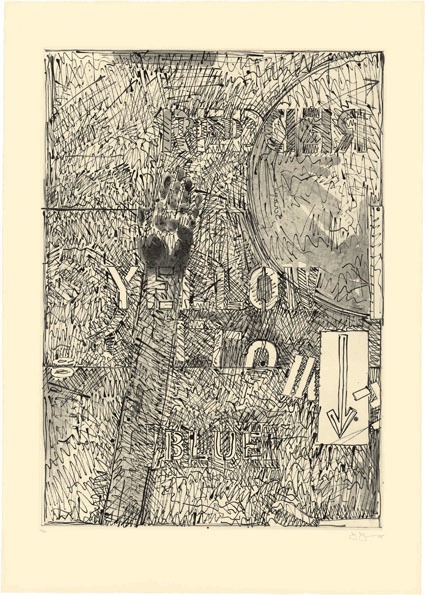 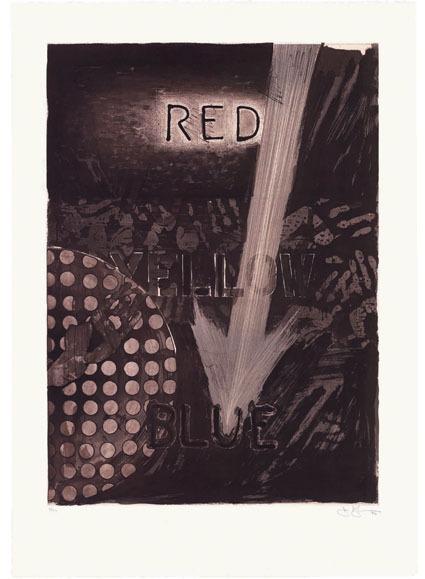 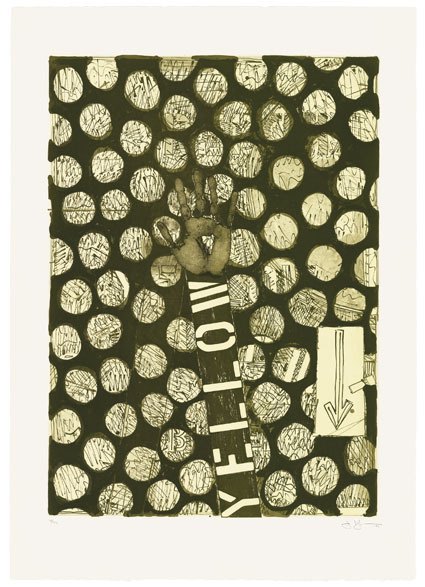 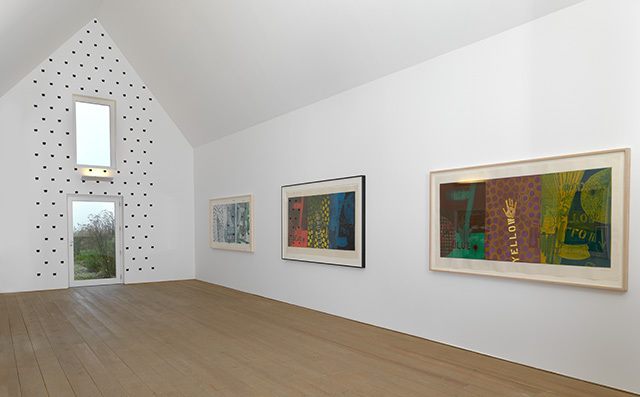 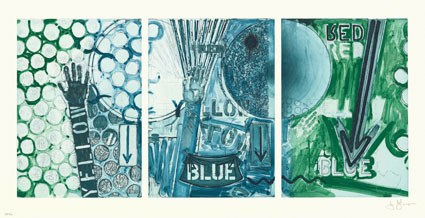 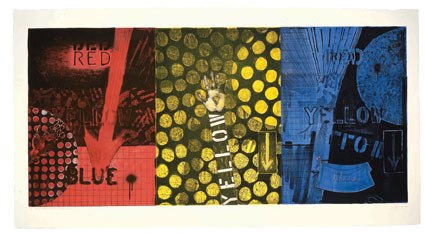 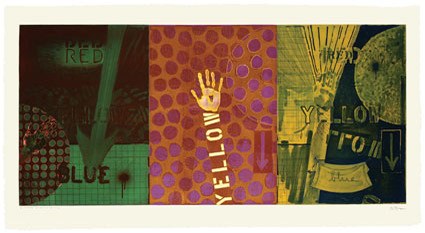 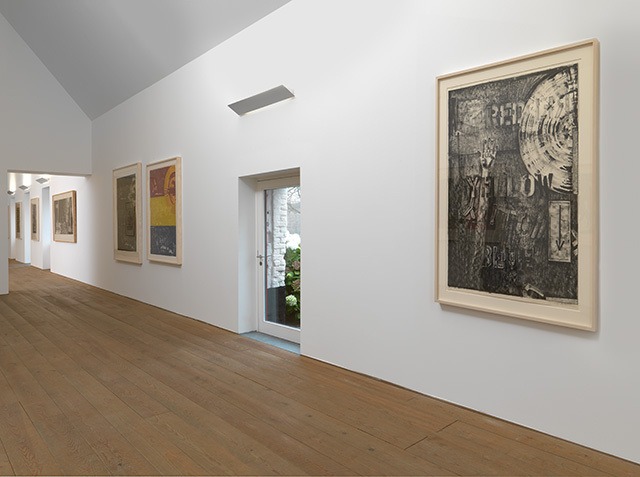 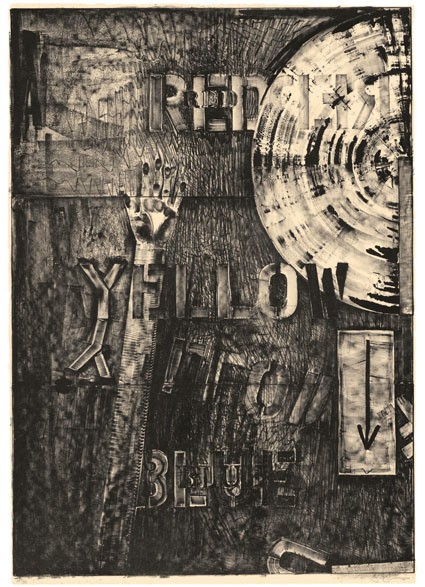 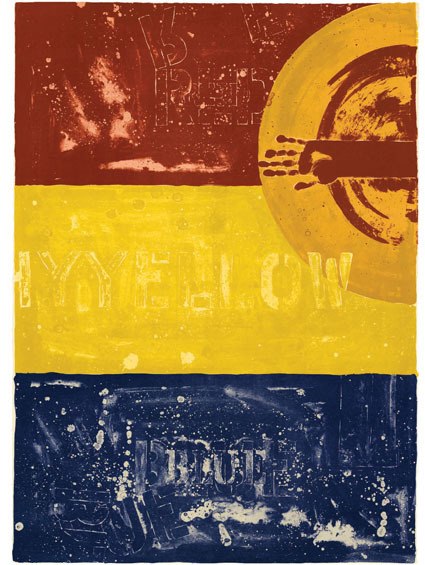 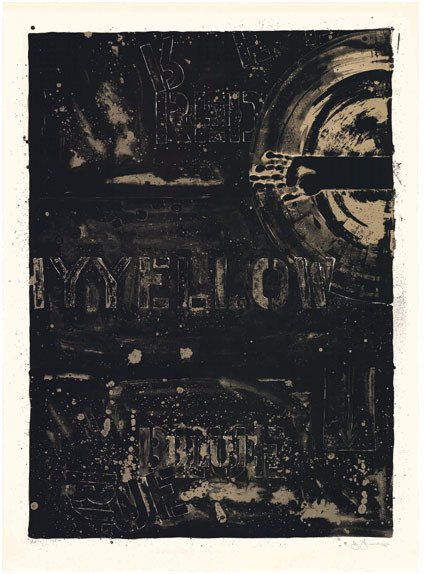 The Handprints of Jasper Johns

Jasper Johns has been using his own handprint as an element in paintings, drawings, and prints for close to 50 years. This exhibition presents many of the lithographs and intaglios that demonstrate not only the wide variety of effects he has achieved through this deceptively simple device, but his mastery of printmaking techniques.

The first time Johns used his hands as a component of a work was in 1962, in four Study for Skin drawings. These were made by the artist covering his face and hands in oil and imprinting them on paper. Since these drawings were studies for a ‘rolled-out’ sculpture of a head, this first manifestation of the artist’s hands can be seen as incidental. However, later that year handprints appeared as focal points in several important paintings, including Diver, Land’s End, and Periscope (Hart Crane), as well as in large drawings.

Revisiting established subject matter is a hallmark of Johns’s sensibility: I like to repeat an image in another medium to see the play between the two: the image and the medium. A year after the Skin drawings, the artist began to explore the imprint theme in lithography at Tatyana Grosman’s Universal Limited Art Editions (ULAE), on Long Island (where he had made his first prints in 1960). The results were Hand – a ’test’ of whether oil or soap would be the best substance to transfer the impression of Johns’s skin to a lithographic stone; Hatteras, and two stones that were later realized as Skin with O’Hara Poem and Pinion.

Since then, Johns has periodically returned to the motif in both paintings and prints. This has included ‘rephrasing’ the themes of the 1962 paintings Land’s End and Periscope (Hart Crane) in lithographs at Gemini G.E.L. in Los Angeles and intaglios at London’s Petersburg Press; and making several large triptych intaglios at ULAE after the 1984 painting, Untitled (Red, Yellow, Blue).

Of note among the many ‘Savarin’-themed lithographs and monotypes in which hands make an appearance is the large monotype with a background of handprints in secondary colors — reminiscent of prehistoric cave painting; and the Savarin lithograph of 1981 that references Edvard Munch’s famous image (also a lithograph) Self-Portrait with Skeleton Arm, but with Johns’s ‘living’ arm in place of the skeletal one and a Savarin can replacing Munch’s likeness (Johns’s Savarins can be viewed as metaphorical self-portraits – the artist as his brushes – as well as still lifes).

An intriguing recent use of hand imagery can be found in Fragment of a Letter (2010), an intaglio diptych that contains the same excerpt of a letter from Vincent Van Gogh to his colleague Emile Bernard in each panel — but the words on the left-hand side have been rendered in sign language, in a multiplicity of miniature, gesturing hands, and Johns has ‘signed’ (in two senses) his full name in larger versions of the hand symbols in rectangles mirrored in the respective panels. There is a large handprint at the bottom of the right-hand panel, reflecting Van Gogh’s signoff to his friend with a ‘handshake’.

These elements are much more literal than Johns usually allows, but the ‘farewell’ handprint is still somewhat enigmatic, regardless of the presumed textual equivalent. The hands in the artist’s other prints project outright ambiguousness. They may be imagined as suggesting a greeting, or symbolizing peace or friendship, or indicating a warning or admonition, or signaling distress, or more than one of these at once; or something else entirely, including functioning as neutral embellishment. They do not elucidate the works they are a part of, but enhance the inherent mystery of the whole.

Jasper Johns was born in Augusta, Georgia, in 1930 and grew up in South Carolina. He came to New York at 18, determined to be an artist. In 1954, Johns made the decision to destroy his existing body of work and start over. This led to painting the targets, American flags, numerals, and other “things the mind already knows” that became his signature subjects.

Johns made an impact on the New York art world with his first one-person exhibition, at the Leo Castelli Gallery in 1958. Some found his paintings baffling or offensive, but others understood their significance. Alfred Barr of the Museum of Modern Art was of the latter opinion, and purchased four works from the show for MoMA’s col- lection. The artist’s reputation has grown steadily from that point on.

There has been critical debate about categorizing Johns (often paired with his friend and colleague from the early years, Robert Rauschenberg) as he made his mark on the scene at a time when Abstract Expressionism was peaking, and shortly before such artists as Andy Warhol, Roy Lichtenstein, and James Rosenquist had developed indi- vidual styles that collectively would come to be called Pop Art.

In retrospect, it is clear that Johns always transcended category. He neither “finished off” Abstract Expressionism nor ushered in Pop, but could be considered — with his painterly brush strokes that exist for themselves on the one hand and the use of mundane objects on the other — as a bridge between the two. In any case, Jasper Johns has long been recognized as one of the most consummate and influential artists of our time.