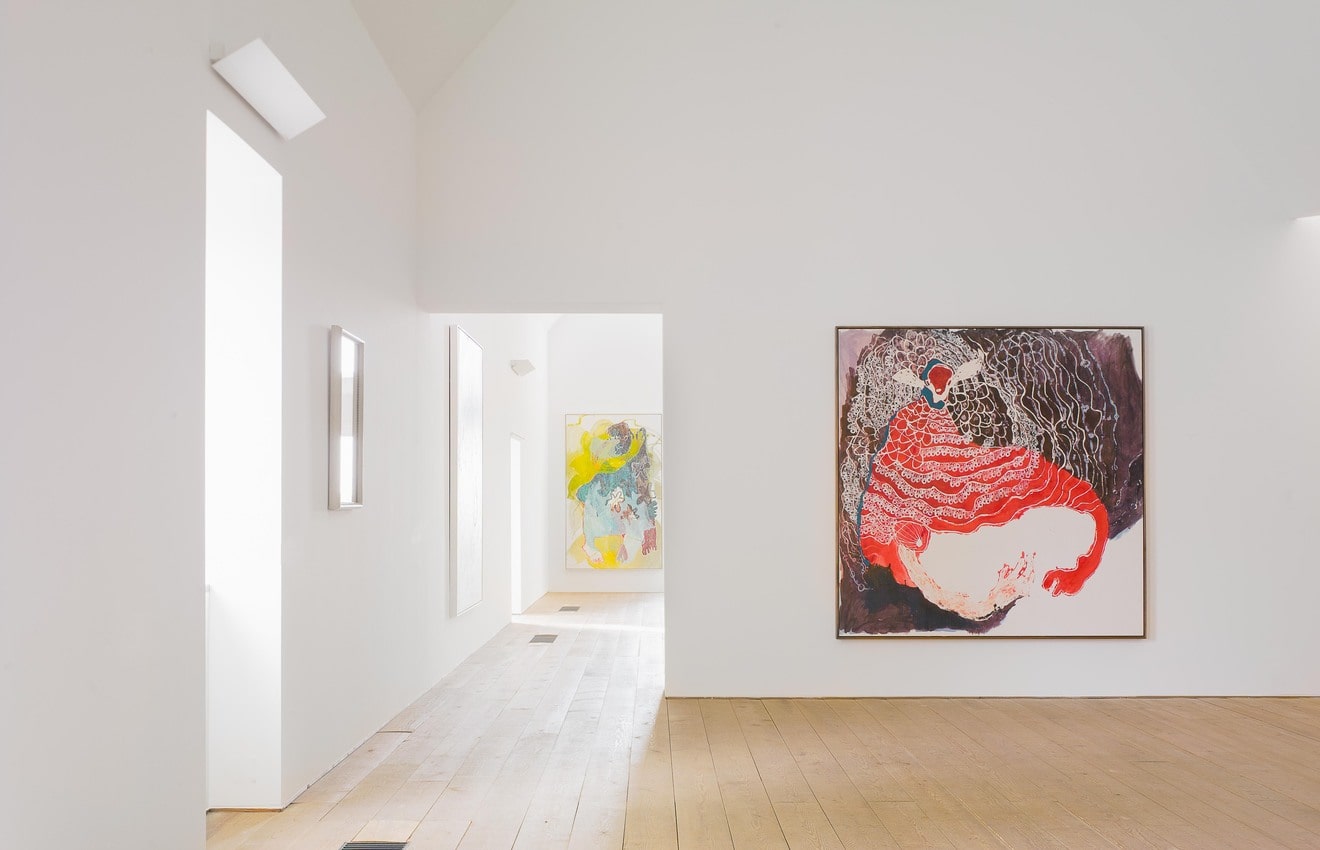 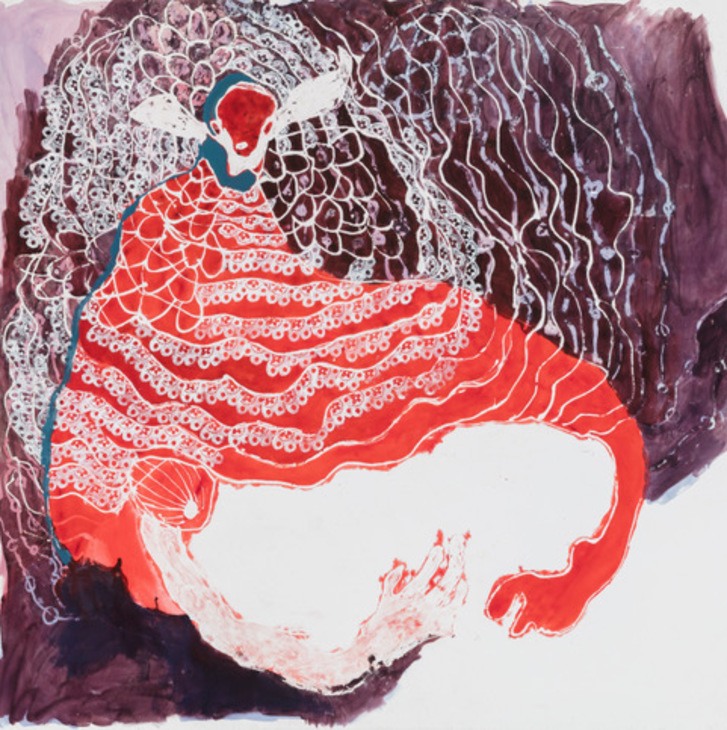 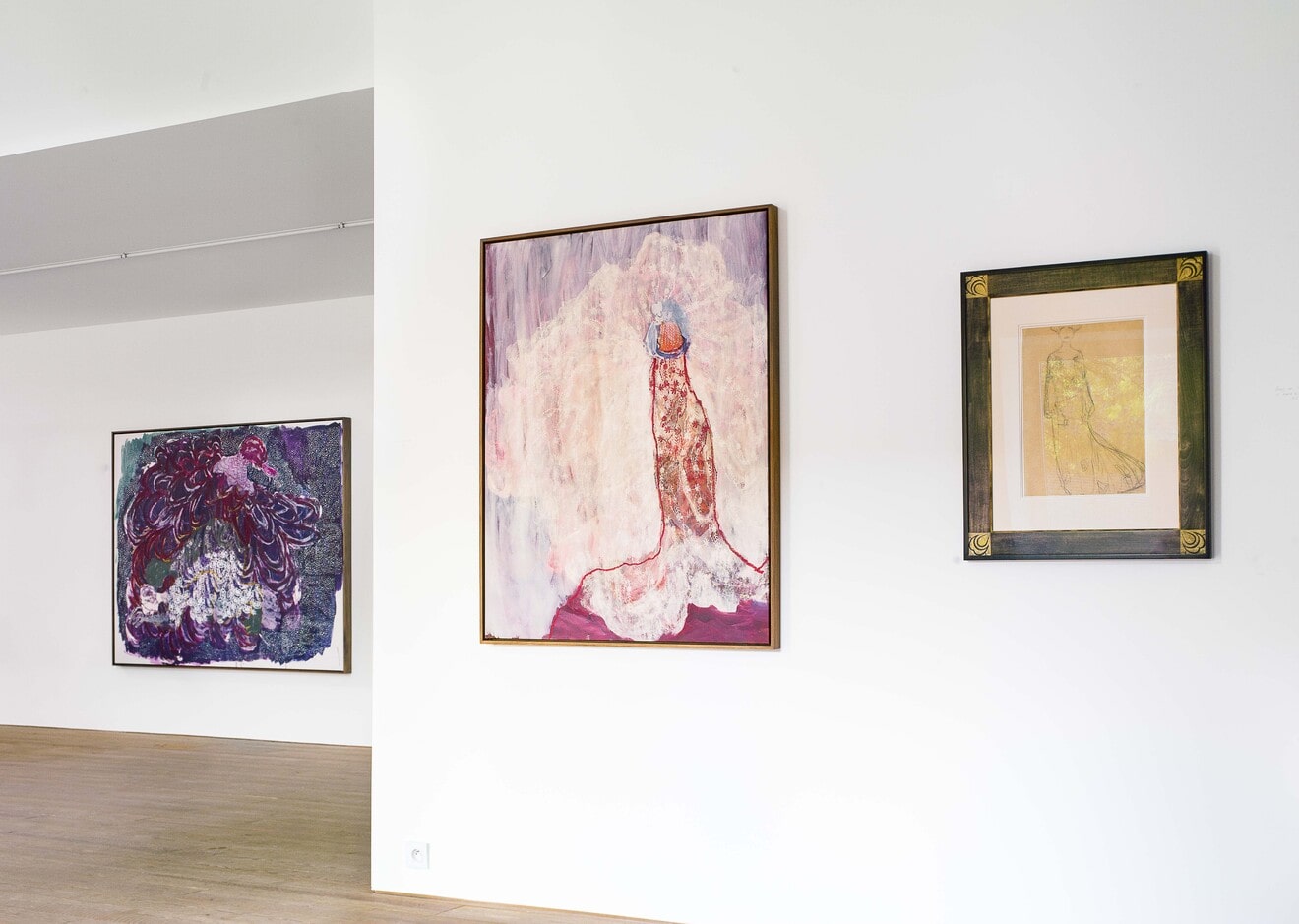 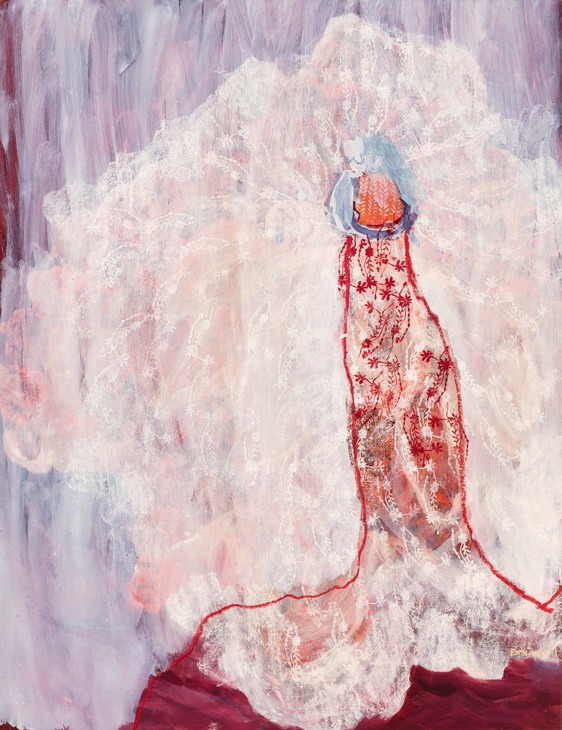 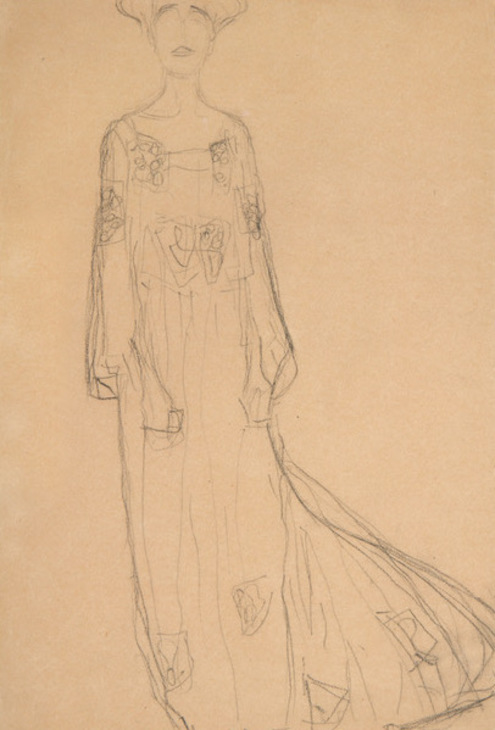 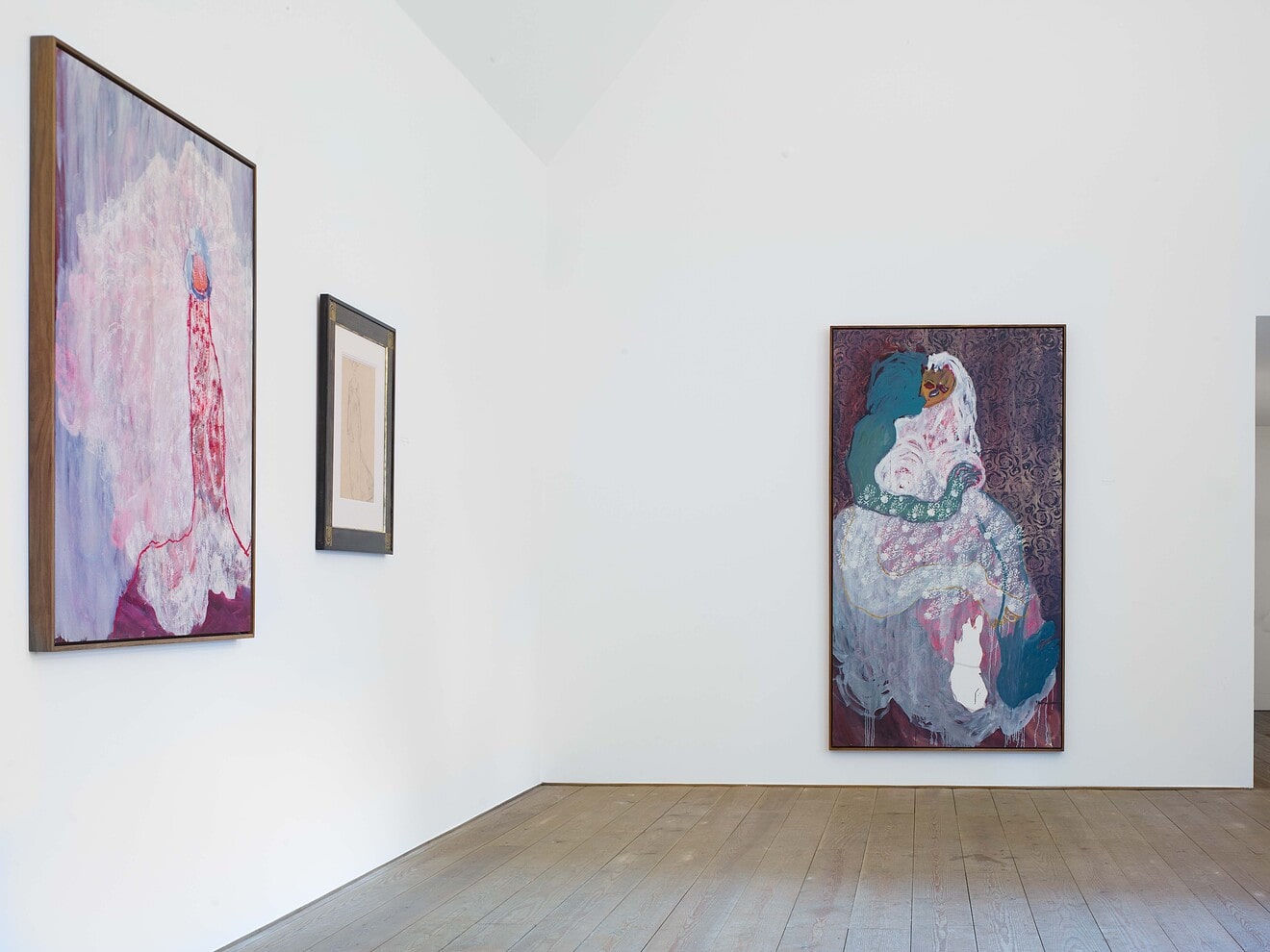 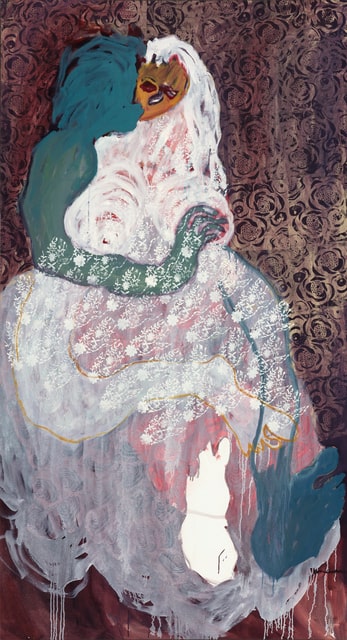 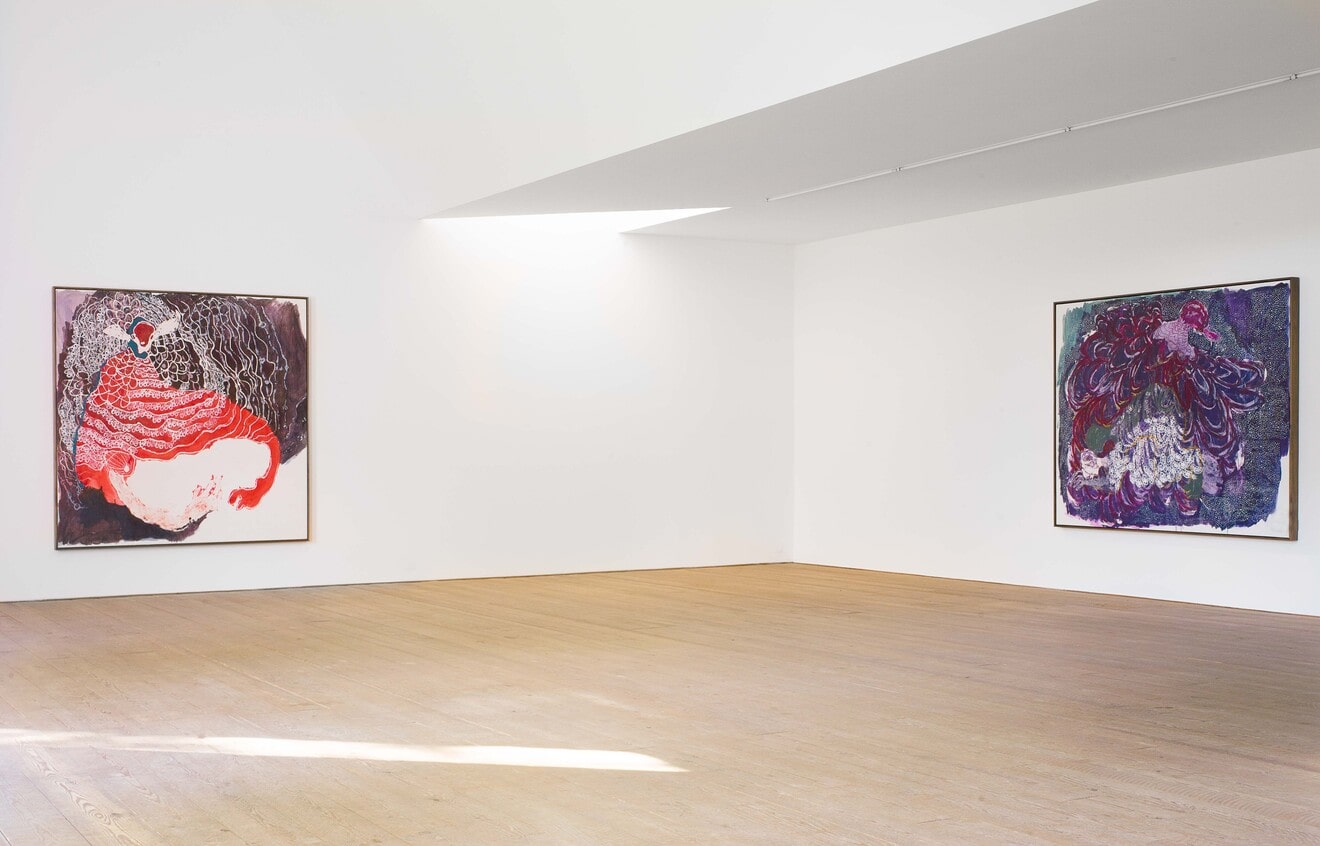 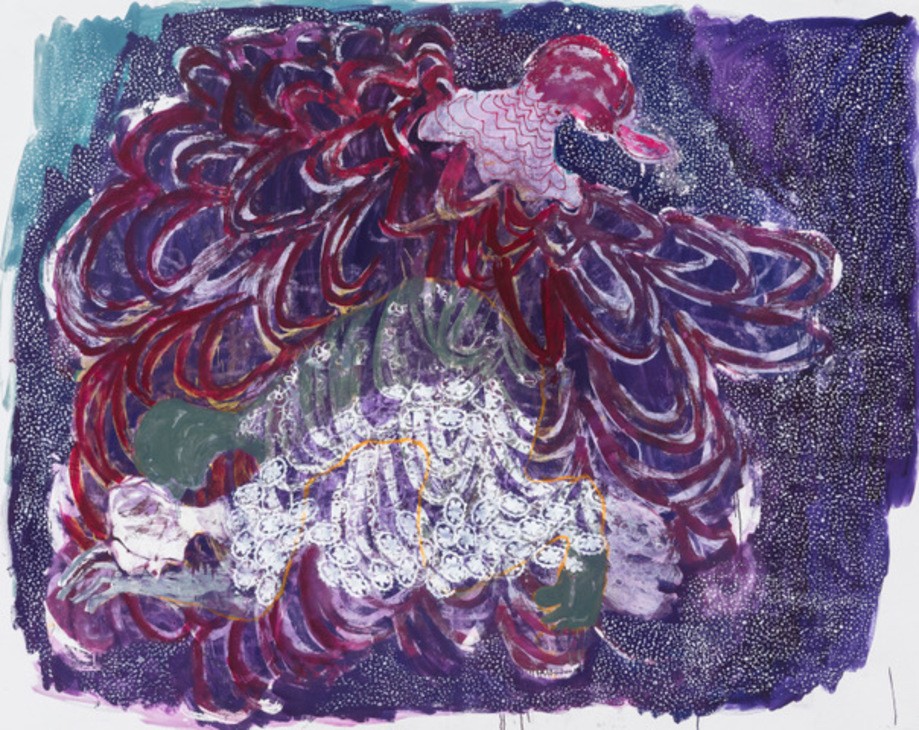 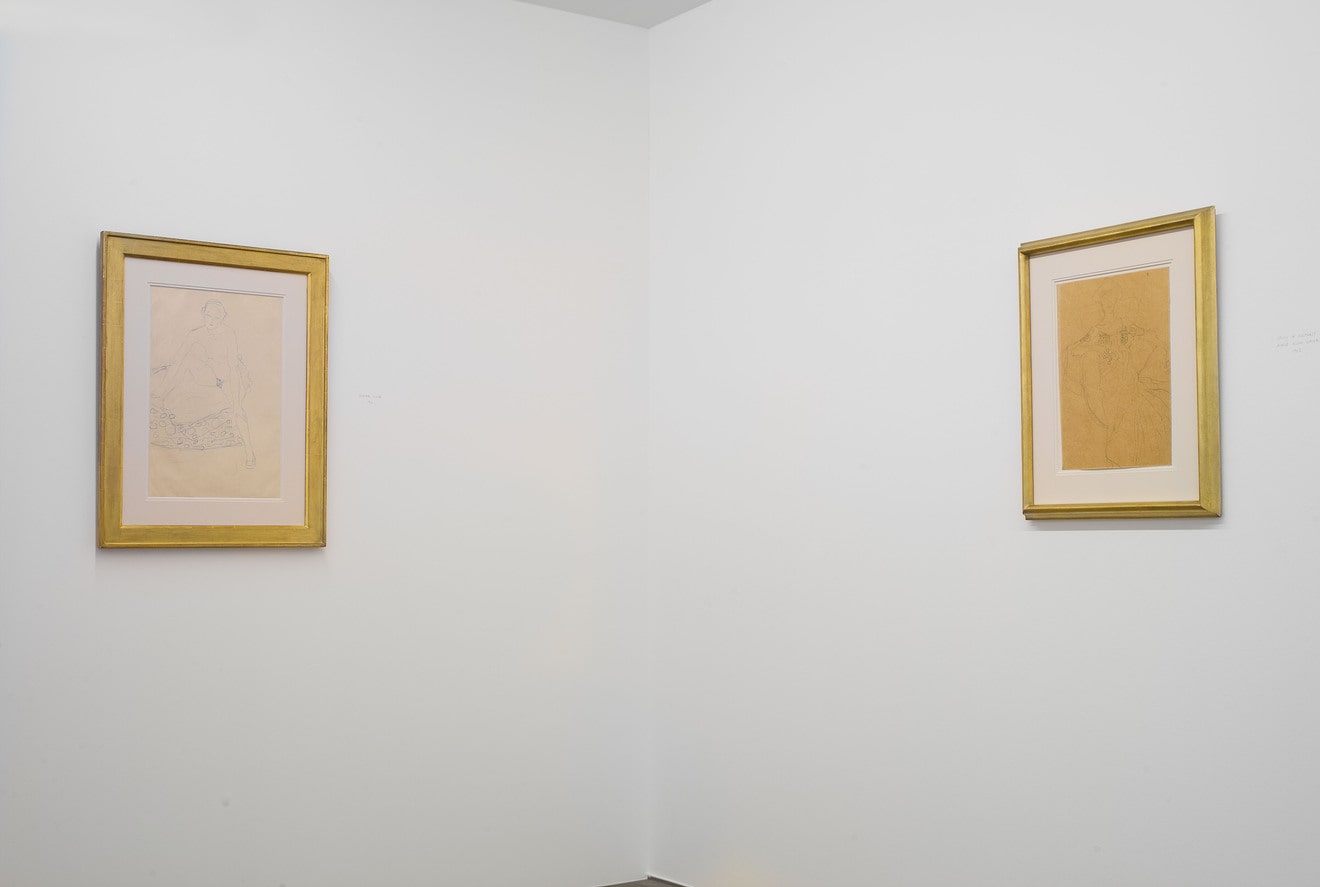 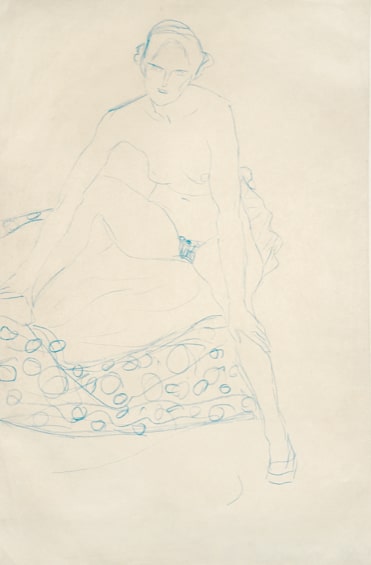 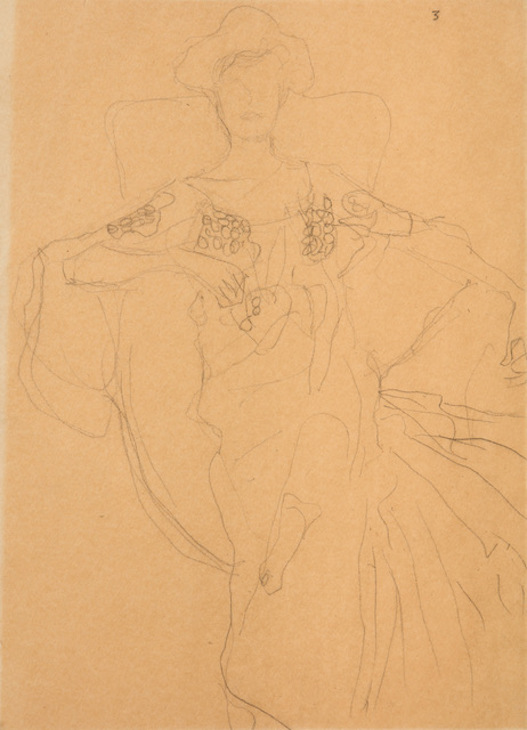 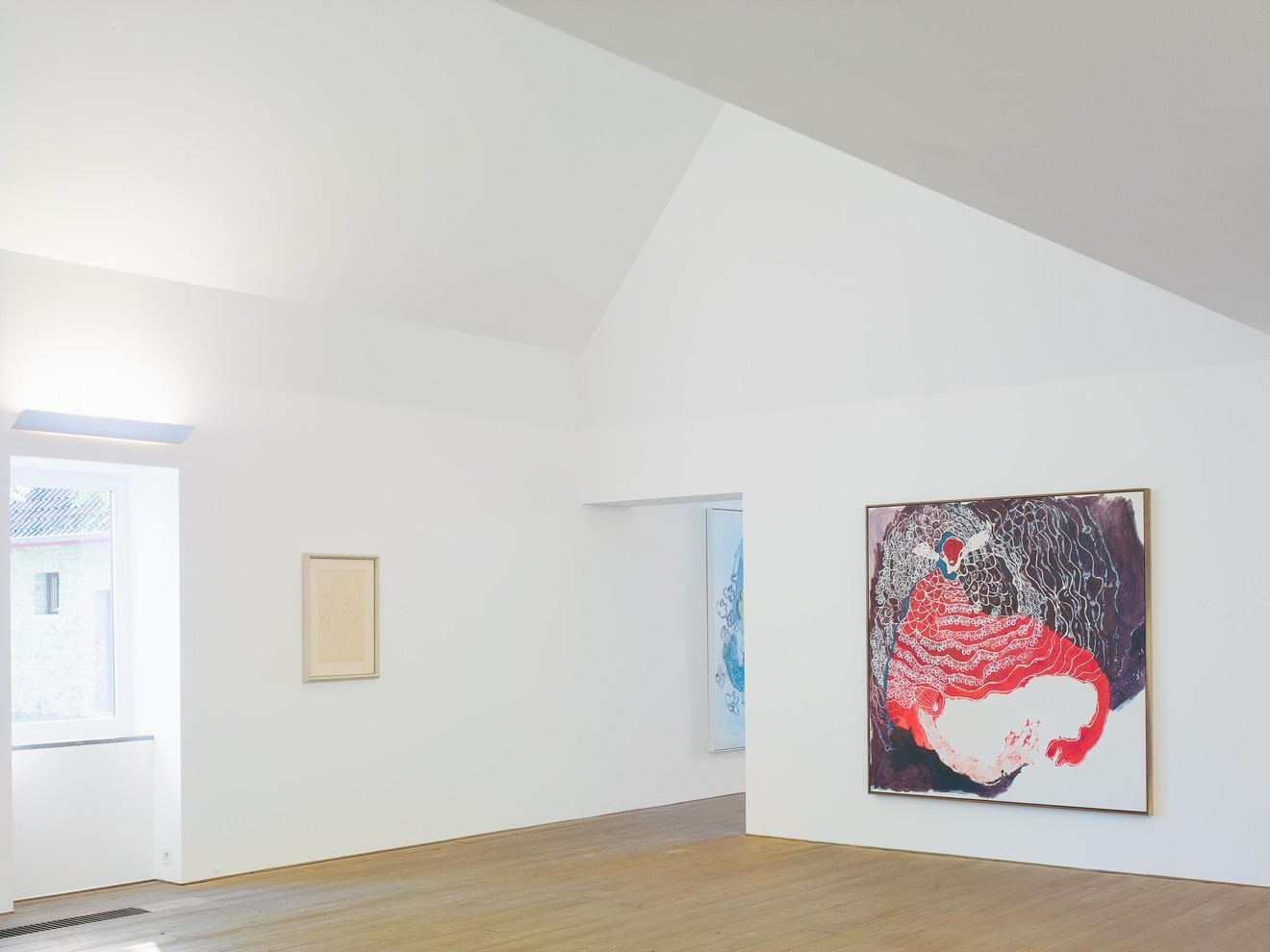 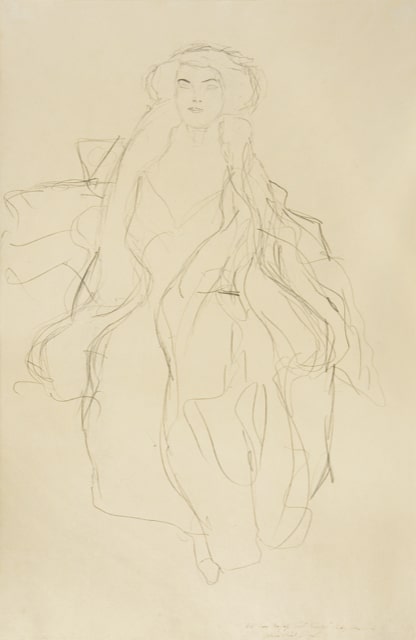 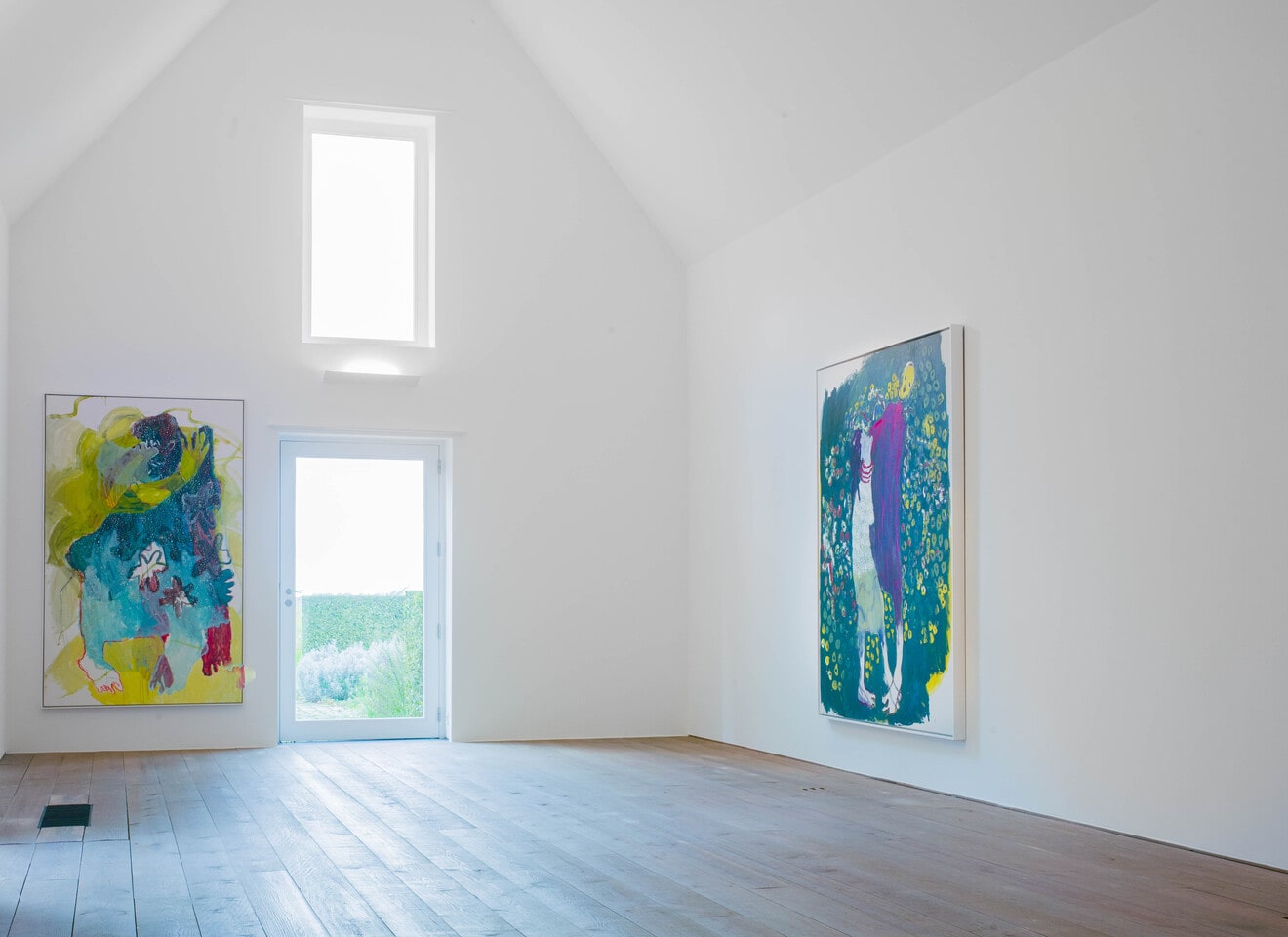 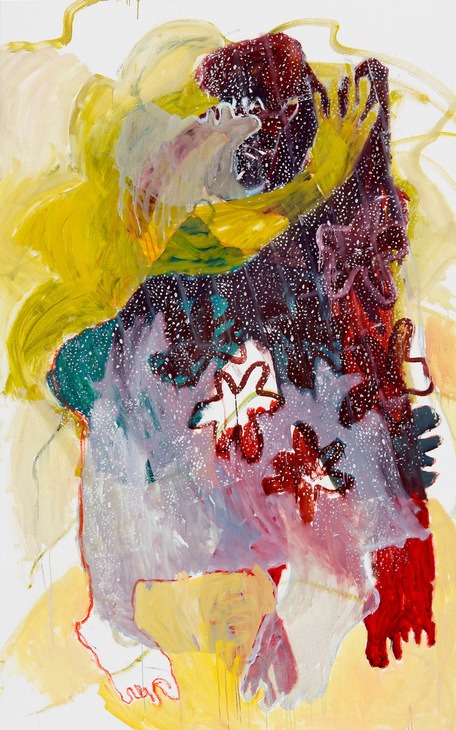 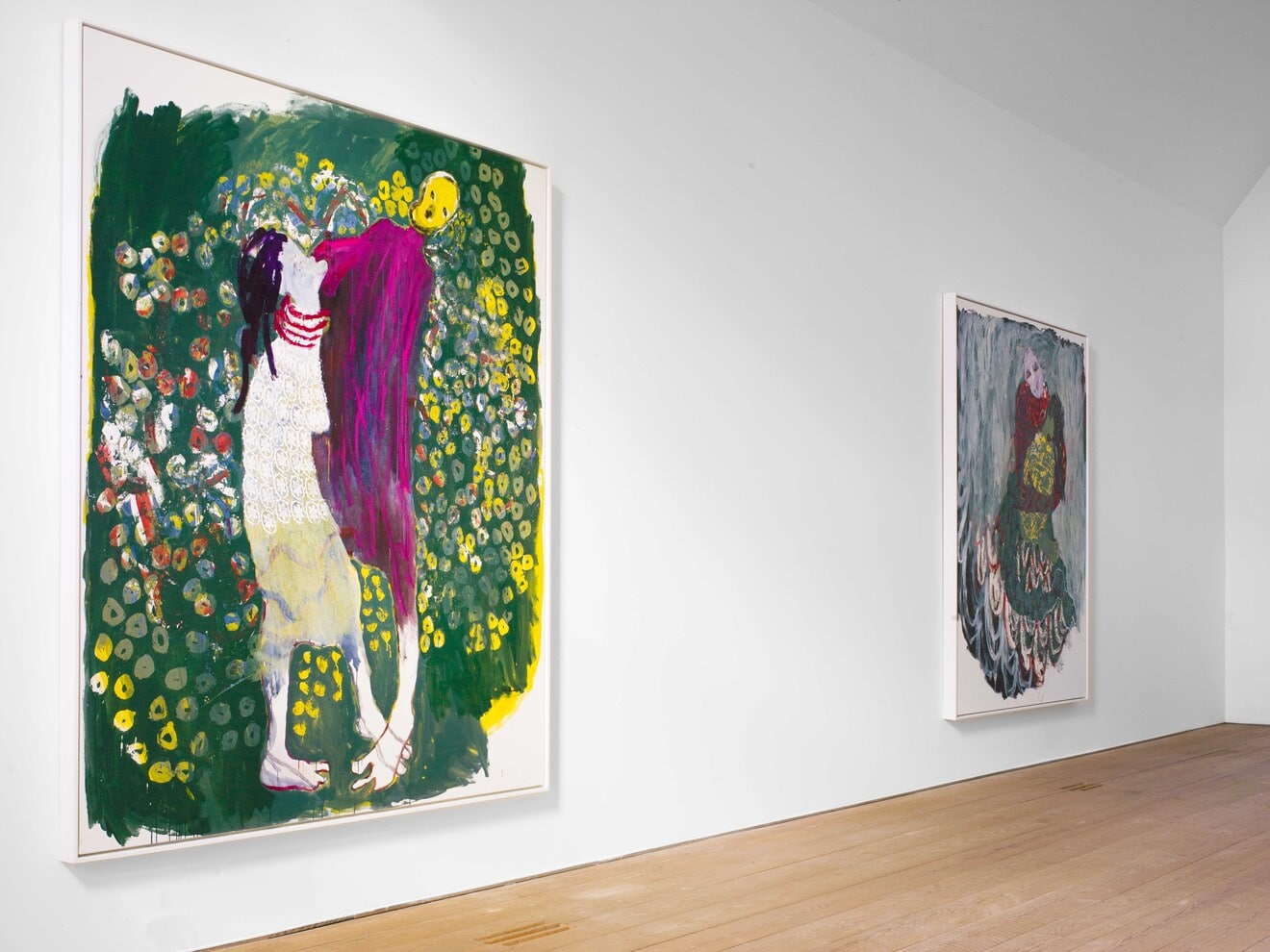 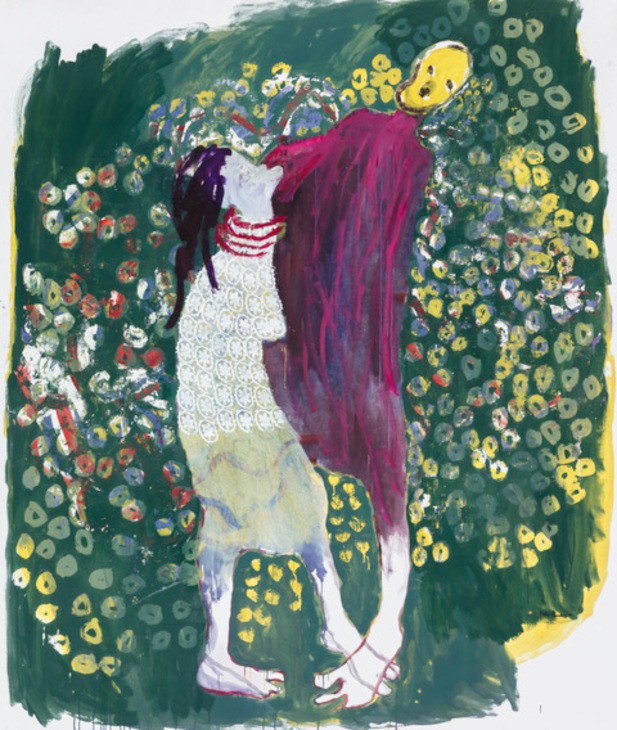 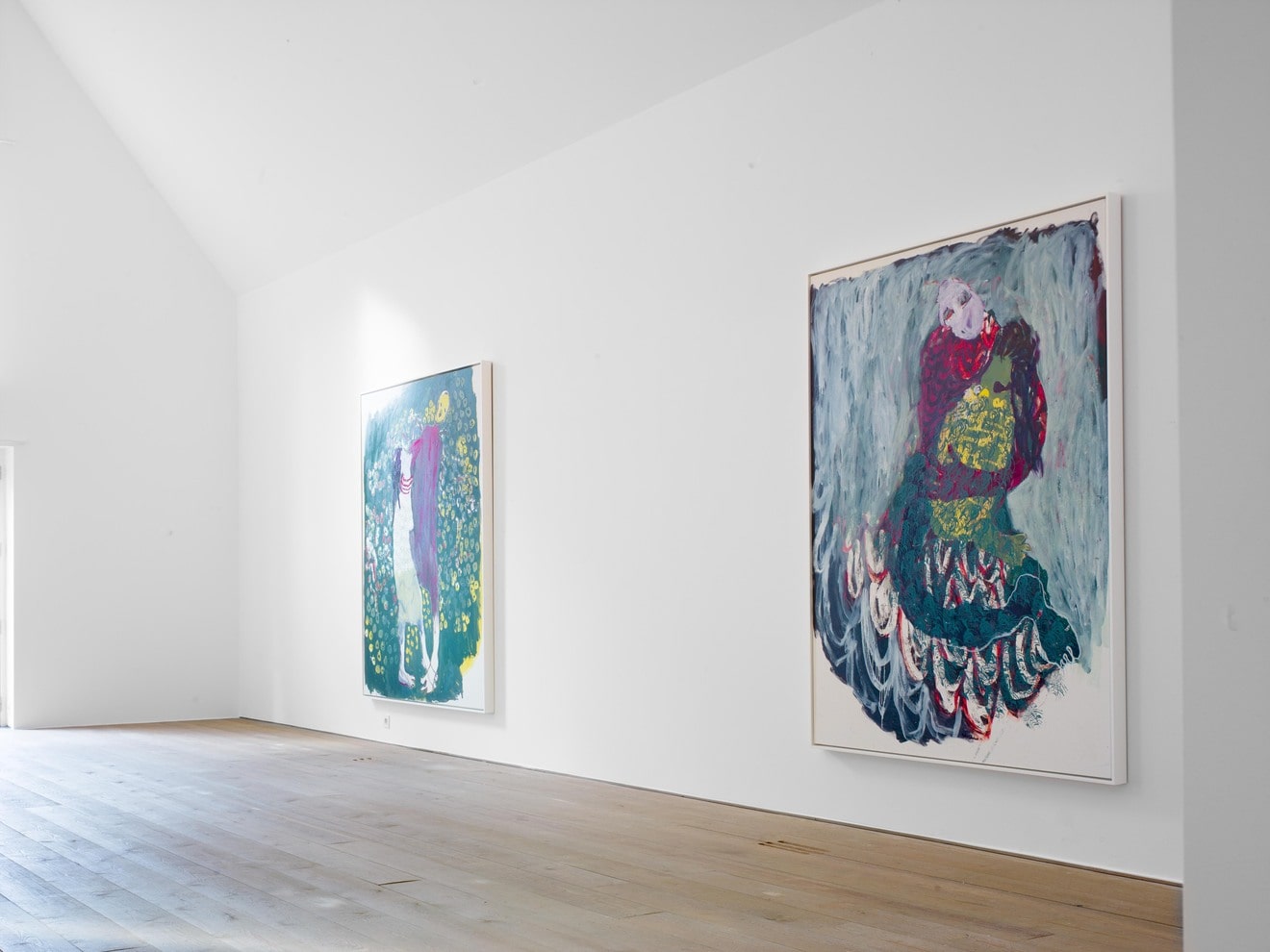 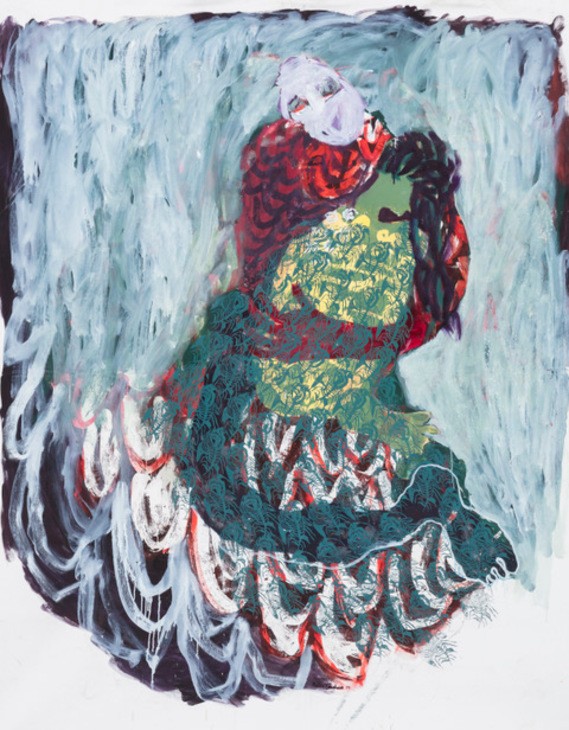 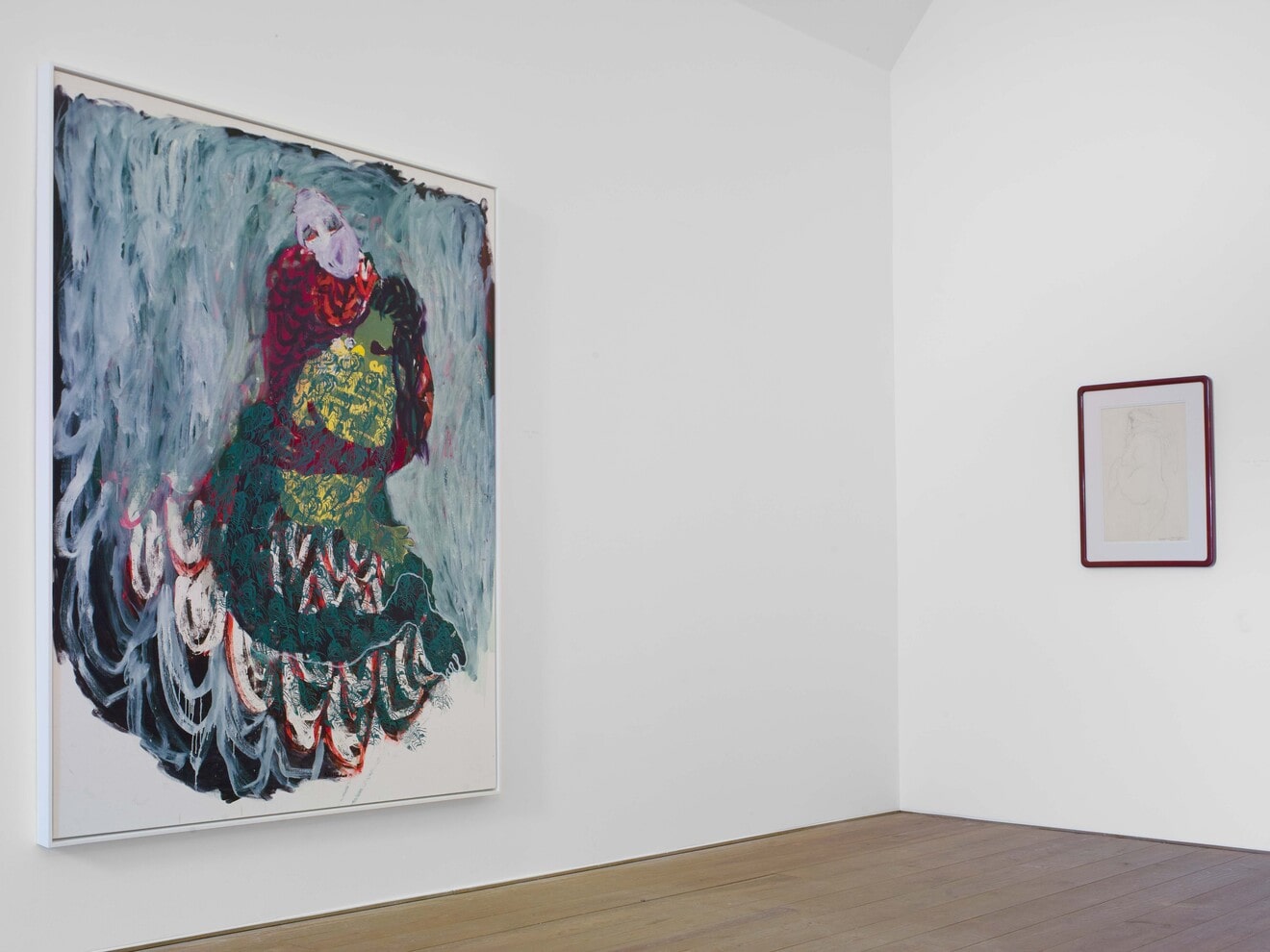 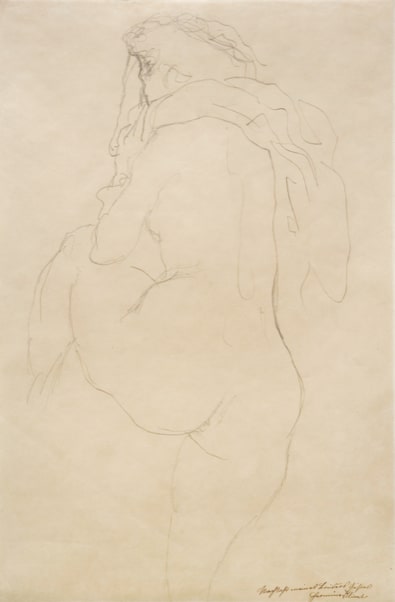 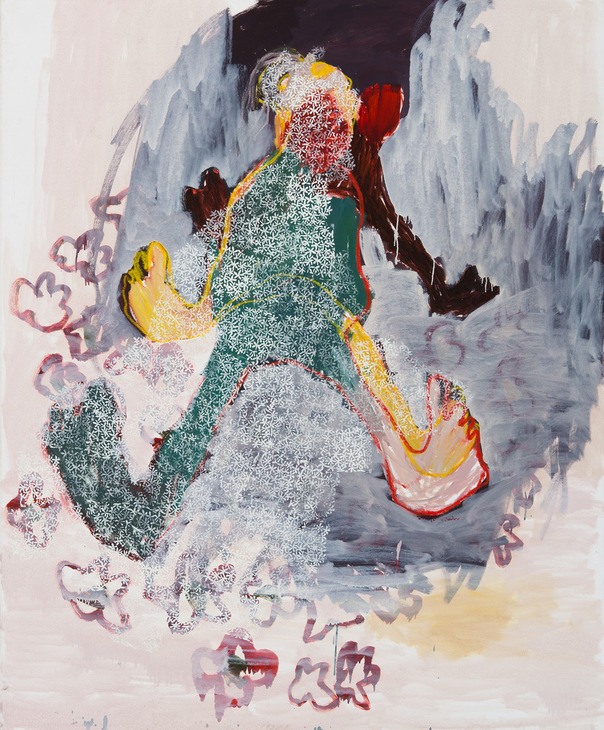 Drawing comparisons with the oeuvre of Gustav Klimt, Portia Zvavahera’s recent work attests to a longing for spiritual transcendence and freedom from the ongoing cycle of human suffering. Physical expressions of love are a central theme in both their oeuvres, an allusion to the idea that this emotion is the key to human existence. A second connecting thread is their shared interest in costumes, textiles and patterns.
Klimt began his career as a successful painter of architectural decorations, and he developed an intense passion for linearity and ornamentation. In the early 1890s, he met the Austrian fashion designer Emilie Louise Flöge who became his lifelong companion. His painting, The Kiss (1907–08), is thought to be an image of them as lovers. Klimt also designed a wide range of dresses and costumes, which Emilie produced and modelled in his works.
Rising up, the central figure in many of Zvavahera’s paintings is surrounded by an aura of radiating lines – sometimes a delicately printed pattern resembling crochet or lacework, at other times a fluttering of expressive gestures – that suggests a protective veil, a guiding influence that embraces and elevates. Her protagonists are central yet recessive and surrounded by an effusion of gestures, marks and patterns. They are overcome and isolated, yet enclosed and assured; it is as though they straddle and surpass love and fear, intimacy and isolation, vulnerability and safety.
This exhibition establishes a fascinating dialogue between Portia Zvavahera’s paintings and a selection of drawings by Gustav Klimt, including two of his exceptional depictions of Adèle Bloch-Bauer. Zvavahera’s works span a number of years, from I Can Feel It in My Eyes (2015) – depicting lovers in ecstatic embrace, surrounded by flowers – to new paintings made especially for the exhibition.
With special thanks to Stevenson, Cape Town and Johannesburg, and Wienerroither & Kohlbacher, Vienna.

A catalogue of the exhibition will be published.

Portia Zvavahera was born in 1985 in Harare where she currently lives and works. She studied at the BAT Visual Arts Studio under the auspices of the National Gallery of Zimbabwe between 2003 and 2005, after which she obtained a Diploma in Visual Arts from Harare Polytechnic in 2006. She has had six solo exhibitions at Stevenson Cape Town and Johannesburg (2014-19), and one at Marc Foxx Gallery, Los Angeles (2017). She held a solo exhibition, Under My Skin, at the National Gallery of Zimbabwe, Harare, in 2010 and has taken part in numerous group exhibitions in that country. She represented Zimbabwe at the 55th Venice Biennale in 2013 as part of the exhibition Dudziro: Interrogating the Visions of Religious Beliefs at the Zimbabwean Pavilion. Group exhibitions include Hacer Noche (Crossing Night) in Oaxaca, Mexico (2018); The Fabric of Felicity at the Garage Museum of Contemporary Art, Moscow (2018); Five Bhobh – Painting at the End of an Era at Zeitz MOCAA, Cape Town (2018); We don’t need another hero, the 10th Berlin Biennale (2018); The Contested Body at Minneapolis Institute of Art, USA (2017); Body Luggage, part of the steirischer herbst festival in Graz, Austria (2016); I Love You Sugar Kane at the Institute of Contemporary Art Indian Ocean, Mauritius (2016); African Odysseys at Le Brass Cultural Centre of Forest, Belgium (2015); Liberated Subjects: Present Tense at Foundation De 11 Lijnen in Oudenburg, Belgium (2015); and Shifting Africa – What the Future Holds at the Mediations Biennale, in Poland and Kunsthalle Faust in Hannover (2014). She has recently taken up residencies at No.1 Shanti Road Studio Gallery, Bangalore (2018), and Gasworks, London (2017), and was an artist-in-residence at Greatmore Studios, Cape Town, in 2009. In 2013 she was the recipient of the 10th Tollman Award for the Visual Arts, and in 2014 won the FNB Art Prize, awarded at the Joburg Art Fair.

Gustav Klimt (b. 1862 – d. 1918) was an Austrian symbolist painter, one of the most famous representatives of the Jugendstil and a founder of the Vienna Secession. His work was an important influence on his younger contemporary Egon Schiele. During his lifetime, Klimt was a critically acclaimed yet controversial artist. His primary subject was the female body and his oeuvre is characterised by a frank eroticism. In addition to figurative works, which include allegories and portraits, he also painted landscapes. Of all the artists of the Vienna Secession, Klimt was the one most influenced by Japanese art and its methods. In the early 1890s, Klimt met the Austrian fashion designer, Emilie Louise Flöge, who was to be his companion until the end of his life. His painting, The Kiss (1907–08), is thought to be an image of them as lovers. She also produced many of the artist’s costume designs and modelled for his work. Klimt travelled little, but trips to Venice and Ravenna, both famous for their beautiful mosaics, are a likely source of inspiration for his use of gold leaf and Byzantine imagery. In 1904, he collaborated with other artists on the opulent Palais Stoclet in Brussels, the home of a wealthy Belgian industrialist and now one of the grandest monuments to the Art Nouveau era.

A Window on the Macrocosmos