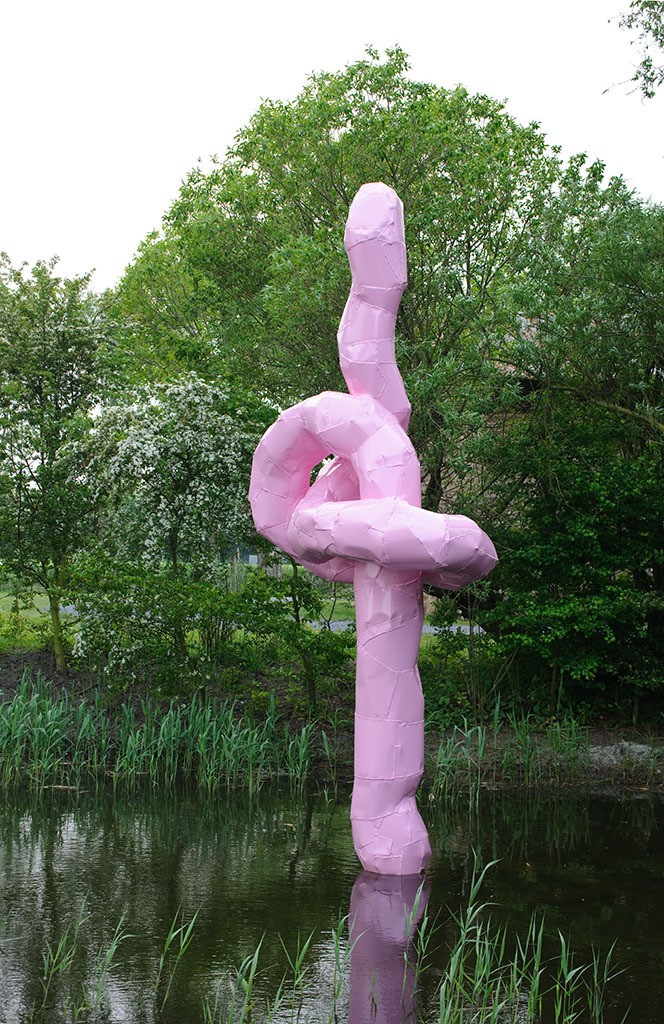 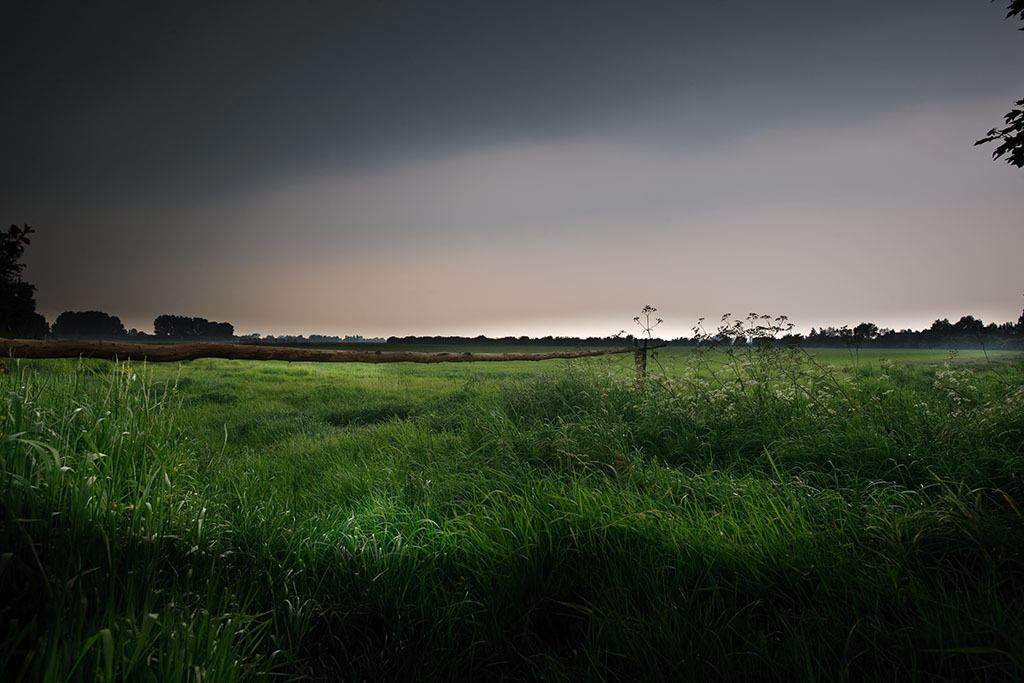 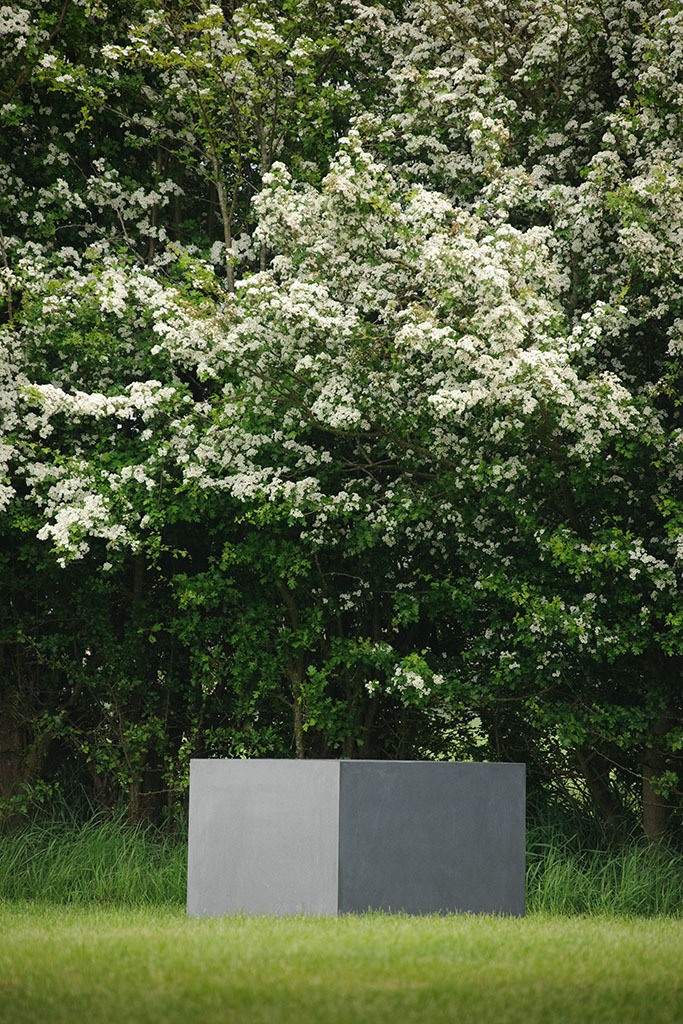 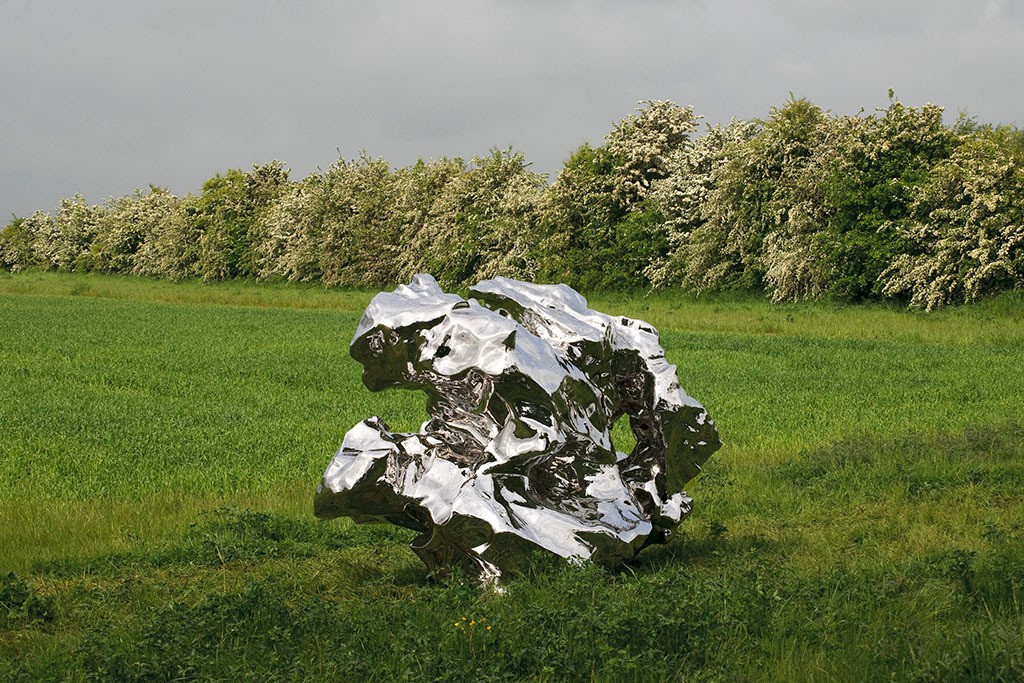 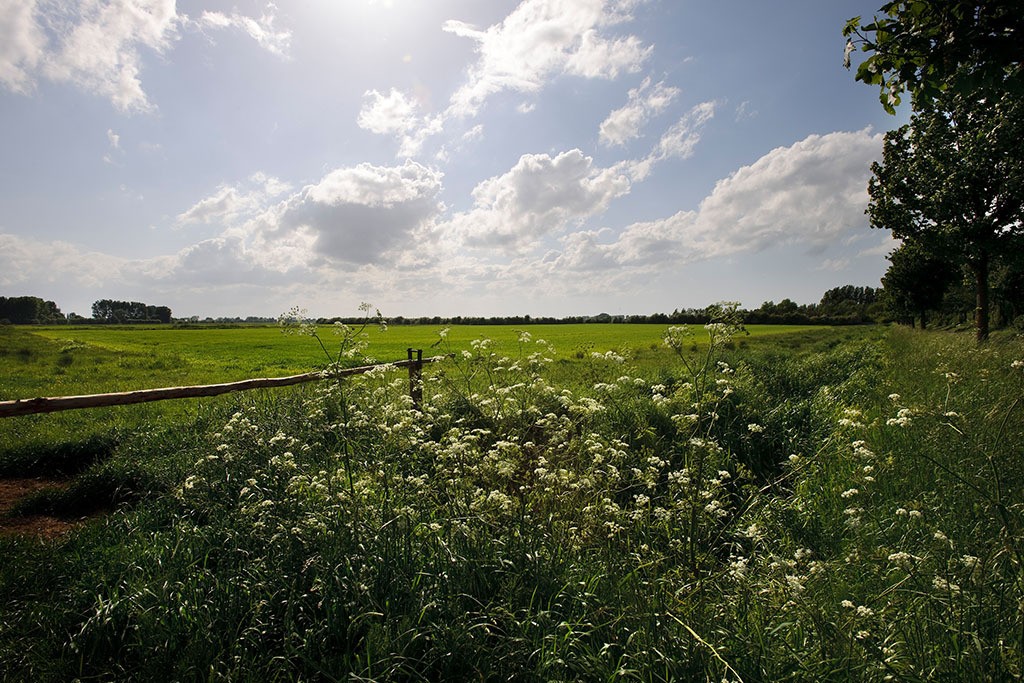 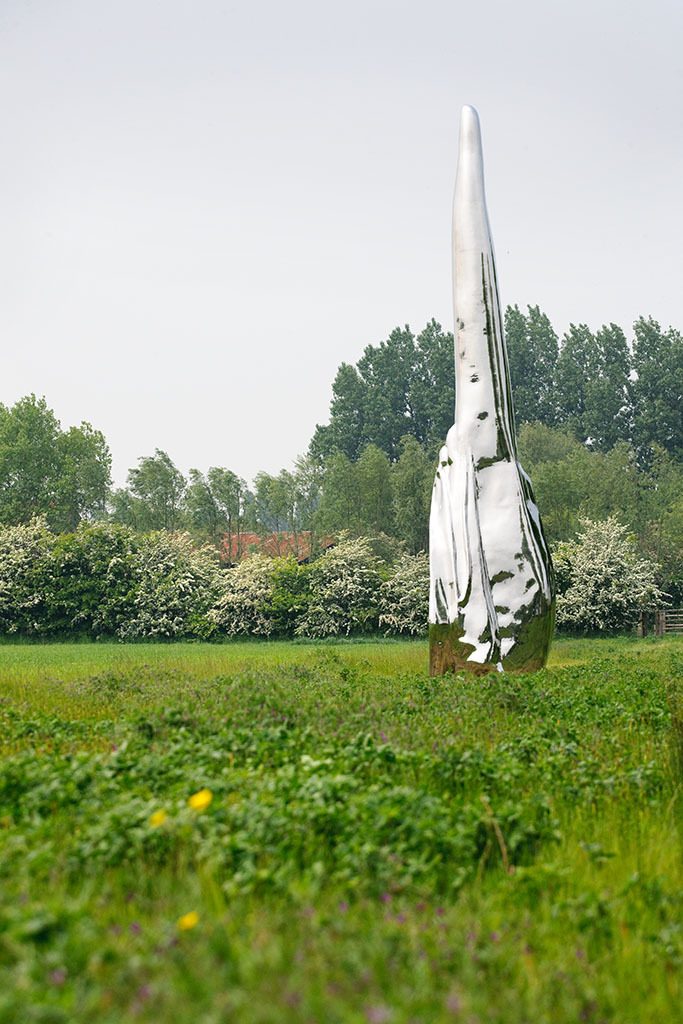 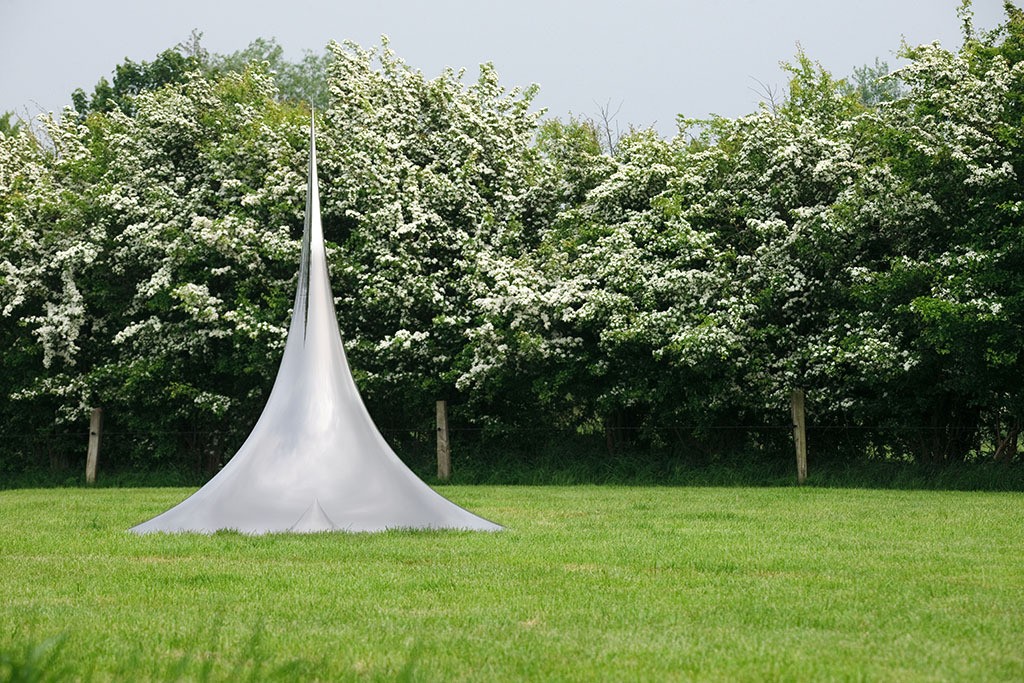 At the occasion of the Triennial Beaufort 2009, ‘De 11 Lijnen’ is pleased to announce an open-air exhibition, complementary to the exhibition organized at the Belgian coast by the Kunstmuseum aan Zee, Ostend.
The exhibition presents sculptures from internationally well-known artists in dialogue with an exceptional surrounding, the site of the foundation ‘De 11 Lijnen’ in Oudenburg.
Giovanni Anselmo, Xu Bing, Louise Bourgeois, Anish Kapoor, Not Vital, Zhan Wang and Franz West have each been invited to install a sculpture in the polder landscape.
‘Sculpture in Nature, Nature of Sculpture’: the exhibition brings the essence of both together. The experience of nature is transcended by the sculpture with which it is related.

Giovanni Anselmo (b. 1934, Borgofranco d’Ivrea), divides his time between Turin and the volcanic island of Stromboli. It was while walking on Mount Stromboli at dawn in 1965 that he was suddenly struck by the realisation that he was merely a tiny detail in the vast continuum of universal energy.

This epiphany was to inspire his many works investigating the finite and the infinite, the microcosm and the macrocosm, and the elemental laws and forces of nature – gravity, tension, magnetism and energy. A wide range of organic and inorganic materials including vegetables, water, electricity, granite, iron and plastic are brought together in combinations that strikingly demonstrate these forces.

After working as a painter from 1959 to 1964, he turned to conceptual art in 1965 and by 1968 was asso- ciated with the emergence of ARTE POVERA, of which he became one of the strictest and most coherent exponents. Giovanni Anselmo has stood the test of time, and his sculptural work has pushed the bound- aries of art for more than three decades.

Louise Bourgeois (b. 1911, Paris) studied at various schools, including the École du Louvre, Académie des Beaux-Arts, Académie Julian and also at Fernand Léger’s atelier. She emi- grated to the US in 1938 after marrying the American art historian Robert Goldwater. Influenced by the influx of Surrealist artists to the US during and after World War II, Bourgeois composed her early sculp- tures by grouping together abstract and organic shapes, often carved from wood. By the 1960s she began to execute her work in rubber, bronze and stone, and the pieces became larger, more referential to what became the dominant theme in her work: her childhood. Deeply symbolic her work uses her relationship with her parents and the part that sexuality played in her early family life as a vocabulary with which to understand and remake that history. The anthropomorphic shapes her pieces take, male and female bodies are continually referenced and remade, are charged with both sexuality and innocence revealing the inter- play between the two. Louise Bourgeois currently lives in New York City.

Anish Kapoor (b. 1954, Bombay) is one of the most influential sculptors of his generation. Since the early 70s, Kapoor has lived and worked in London, where he studied art, first at the Hornsey College of Art and later at the Chelsea School of Art Design.
He was one of a generation of British-based sculptors who became established in the international arena during the 80s and is prominent among his contemporaries for the quality of hermetic lyricism that per- meates his work. He has acknowledged a bearing on his art of both Western and Eastern culture. Kapoor’s work explores polarities such as light and dark, substance and emptiness, place and placelessness, through materials.
These materials include sandstone, slate, alabaster, often impregnated with raw powdered pigment, water and stainless steel.
He has since gained international acclaim, exhibiting extensively worldwide.

Not Vital (b. 1948 at Sent, a village in the Lower Engadine, in the Swiss canton of Grisons) moved to Paris in 1968 to study art.
In 1974, he went to New York to concentrate on his work as a sculptor, where he .
Vital is not showing us actual animals, implements or organs but fragmentary cultural construct.
It is clear that specific memories or friendships have provided the stimuli. Their making seemsfuelled by a Surrealistic impulse to concentrate and condense, coupled with a soft-spoken native art. Vital’s art shifts and migrates in a dreamlike way between non-European artefact and a contemporary form of totemism. He is currently living between Sent ( Switzerland), New York ( USA), Agadez (Niger), and Lucca (Italy).

Zhan Wang (b. 1962 Beijing, China) is widely recognized as one of China’ s leading contemporary artists today. Working in installation, photography and video, his sculpturally informed practice challenges ideas of landscape and environment, addressing the urban, rural, artificial and industrial. Zhan Wang’s art is a particular perspective fundamentally anchored in his relationship to his own cultural heritage.

Zhan Wang’s most celebrated work to date is his series of “artificial rocks” – stainless steel replicas of the much-revered “scholar’s rocks” traditionally found in Chinese gardens. The mirrored surfaces of these often monumental objects absorb the viewer and its surrounding environment, enticing them to become part of the work, an abstraction and distortion of reality, thus creating a visual interplay between positions of tradition and modernity. He further explores his fascination with material and reflection in a series of works titled “Urban Landscape” in which he recreates models of major cities, such as London, Beijing and Chicago – using kitchenware and cutlery. The process of miniaturizing an urban sprawl through the use of domestic and ordinary objects calls forth the basic necessities of life, despite the rapid modernization of contemporary society.

Franz West (b. 1947 in Vienna) lives and works in Vienna. West, without a doubt, is one of the most important artists of our day and age. For three decades now his oeuvre has had a significant impact on the development of contemporary art.
Most characteristic for West’s modus operandi are his Passstücke (Fitted Pieces), produced for the first time in 1974, the Möbelskulpturen (furniture sculptures) from 1985 onwards, and the Aluskulpturen (alumini- um sculptures) since 2000.
A sculptural element is turned into an object only made complete by its being used, as it were. West thus introduces a new definition of the term sculpture. He contrasts the autonomous, self-contained work we are familiar with from art history with the interactive instrument ultimately, and each time anew, finished as a work of art by the observer/user handling it.