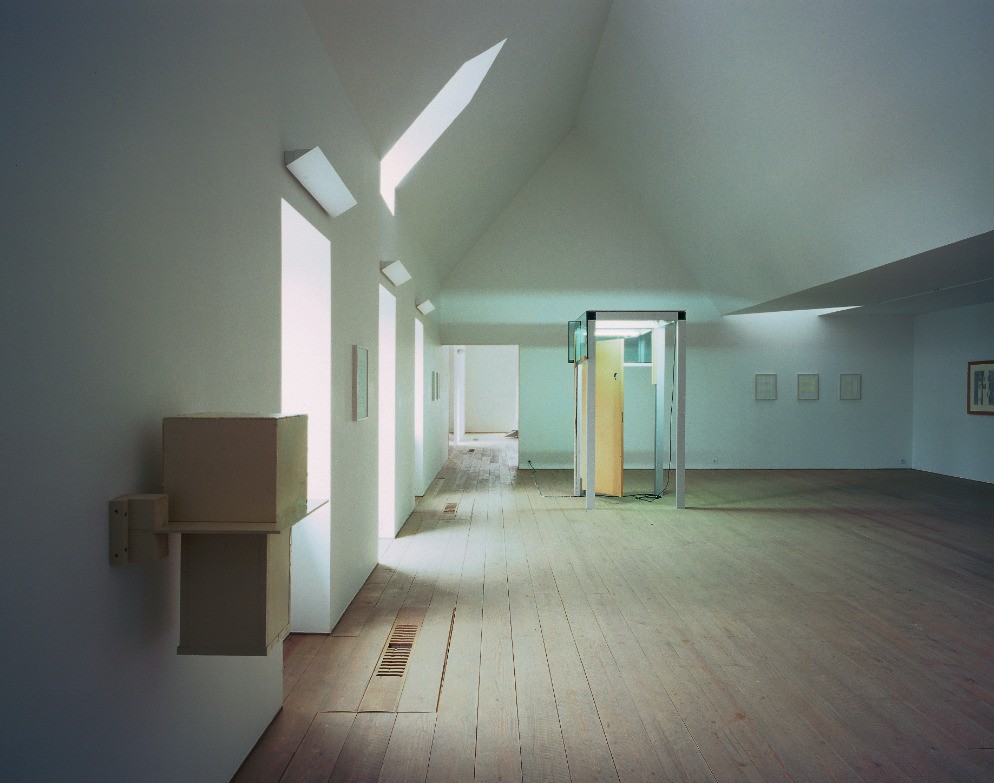 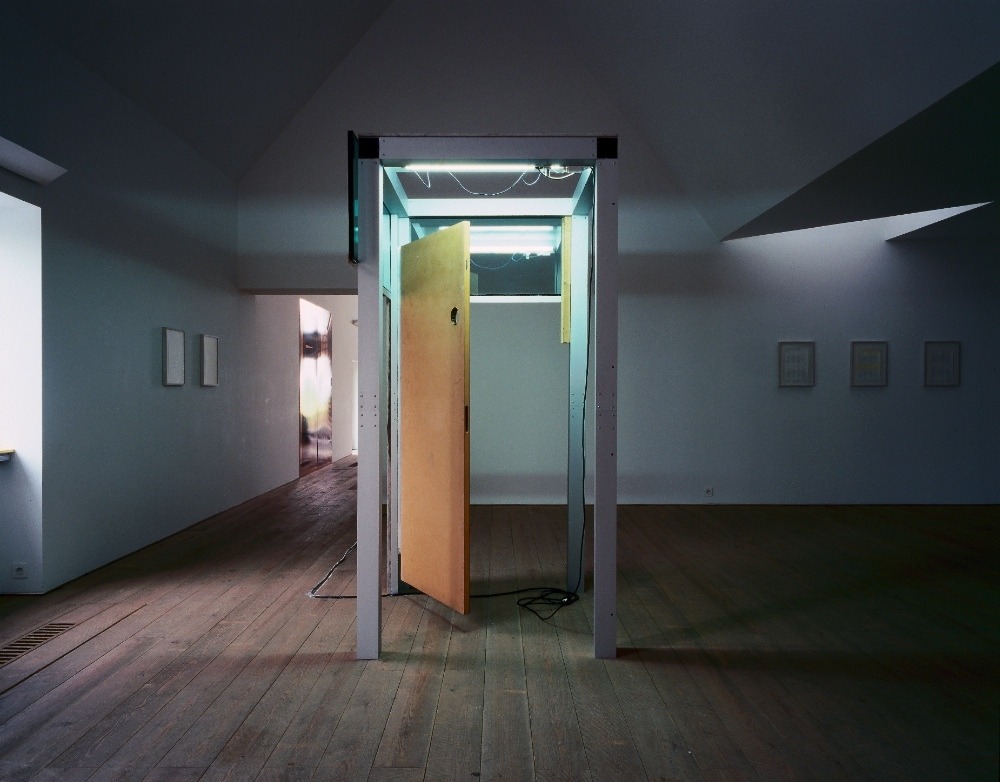 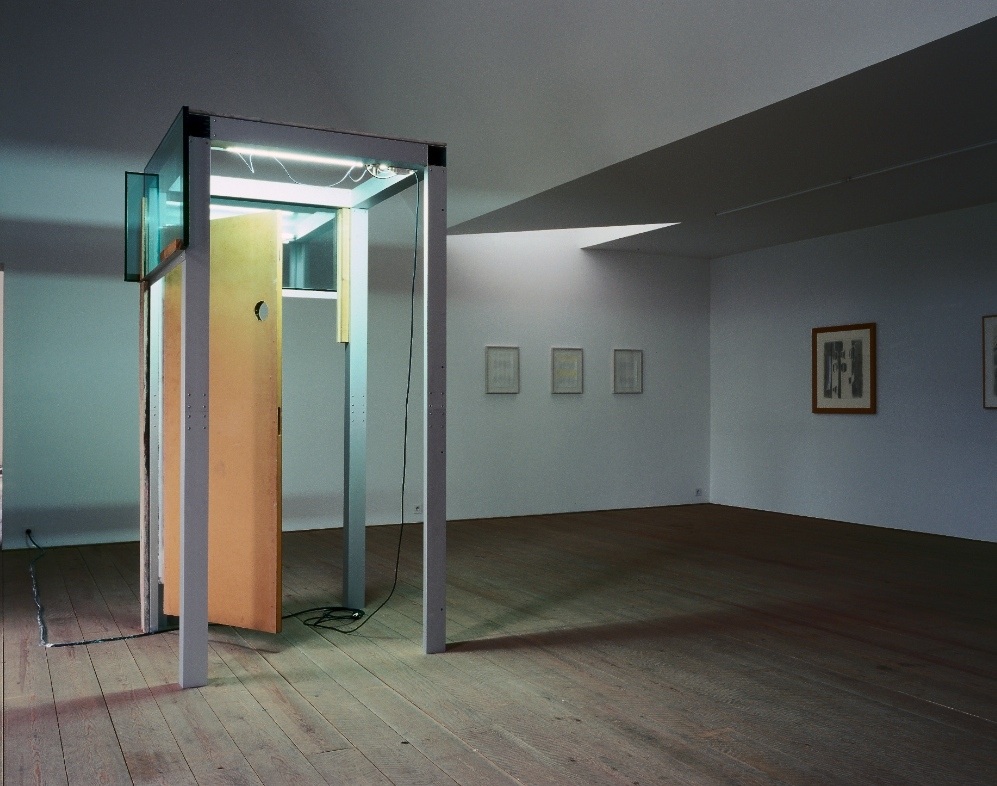 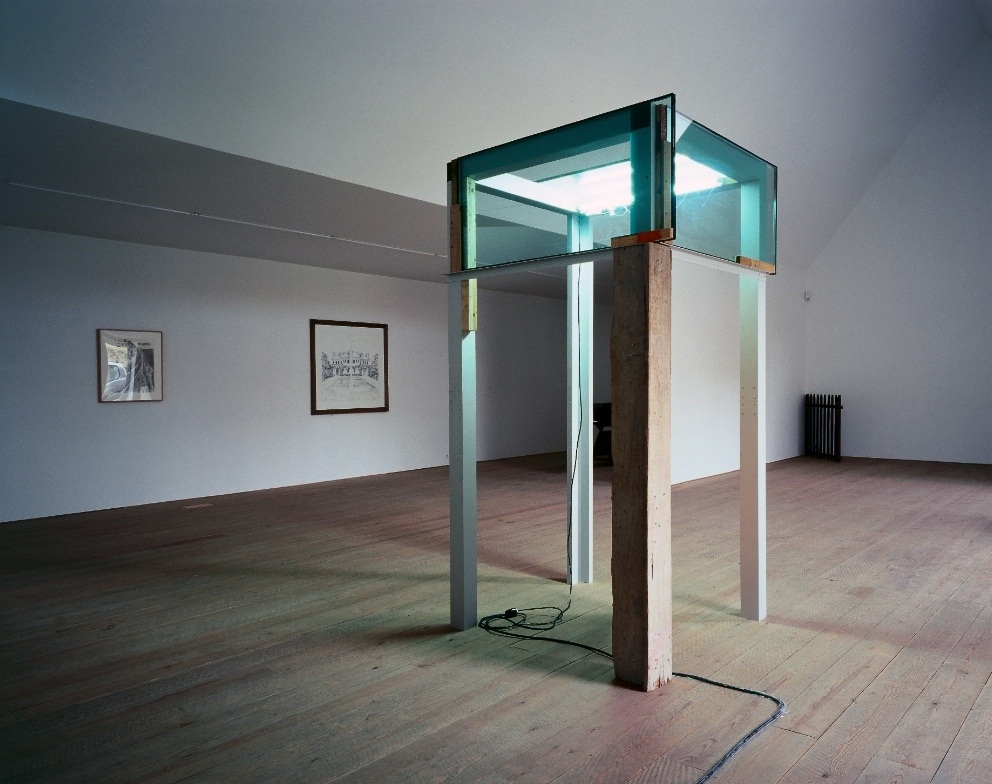 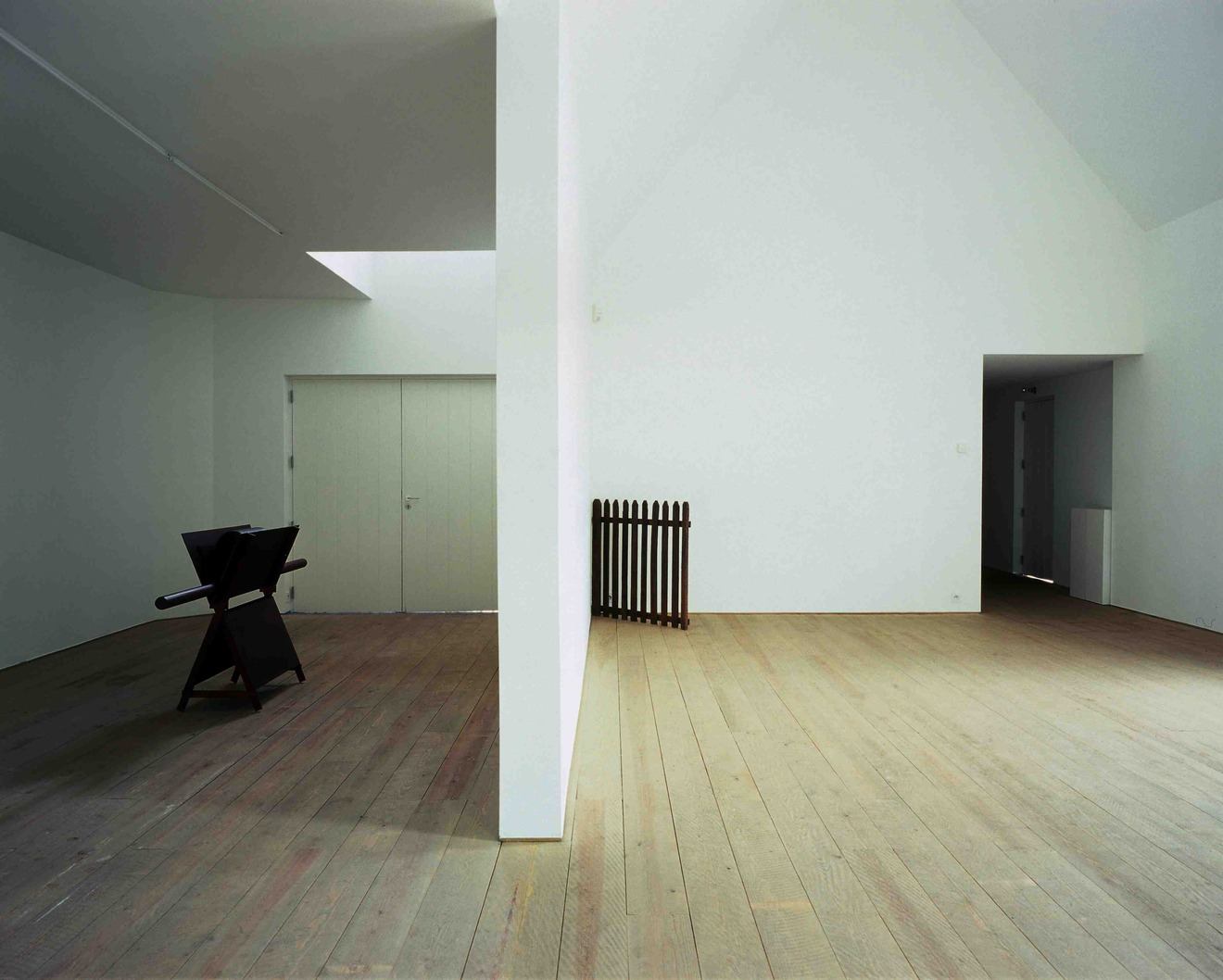 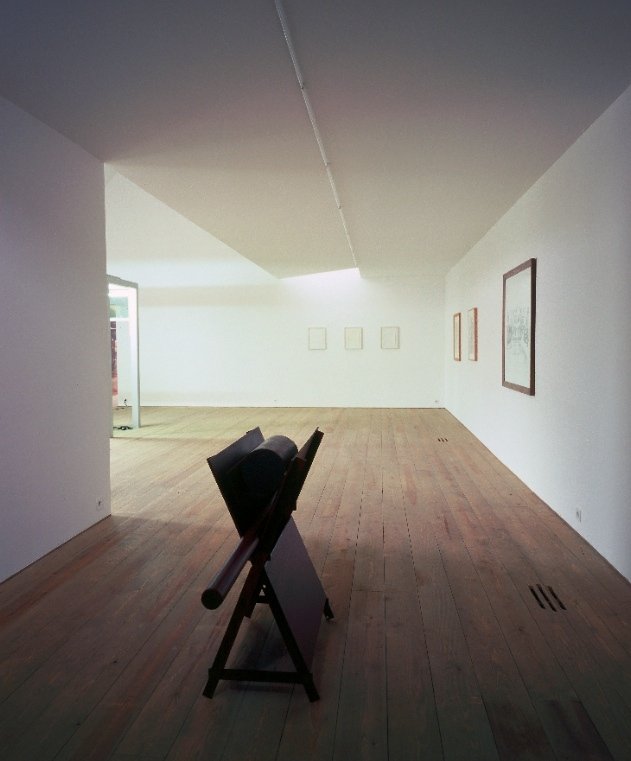 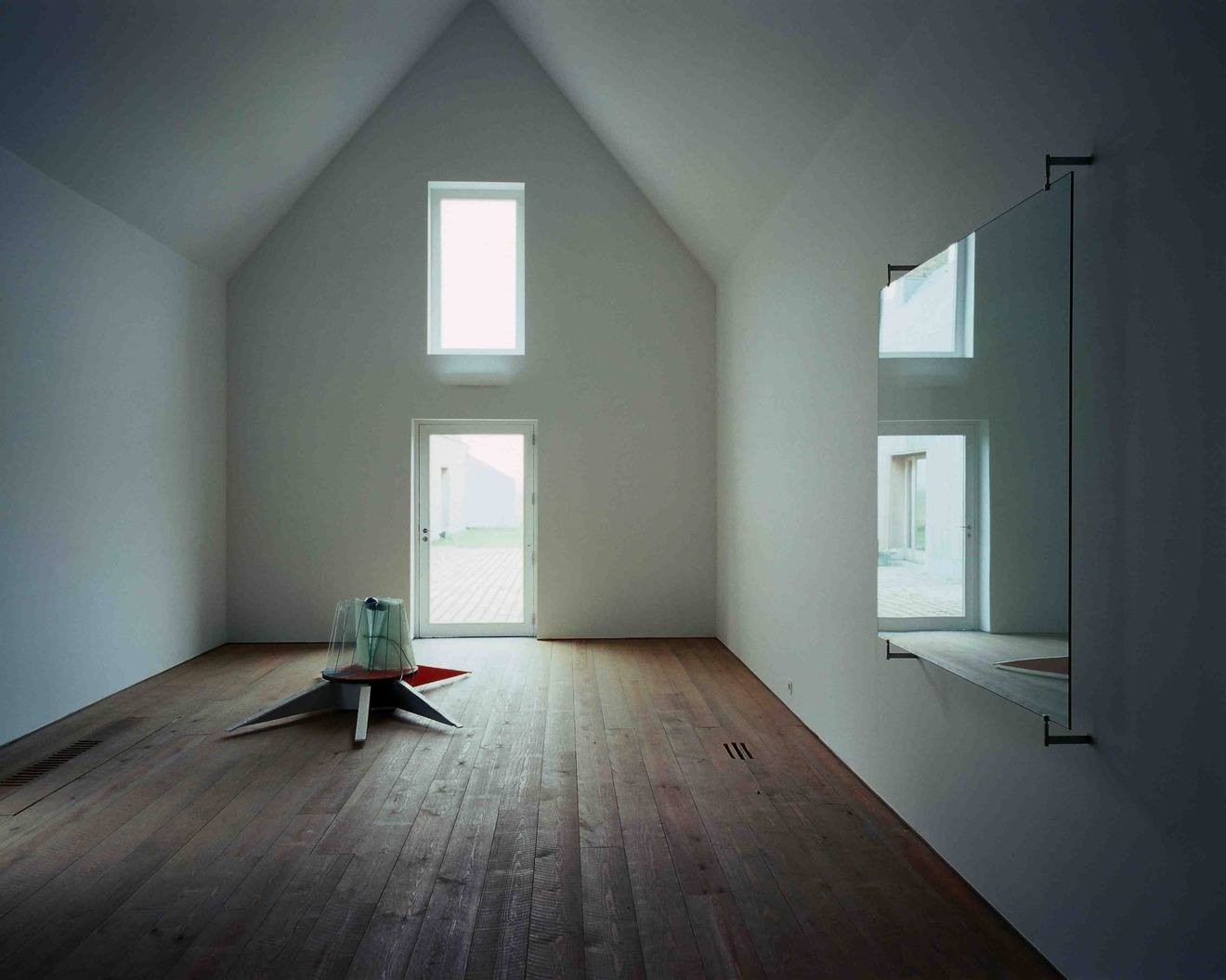 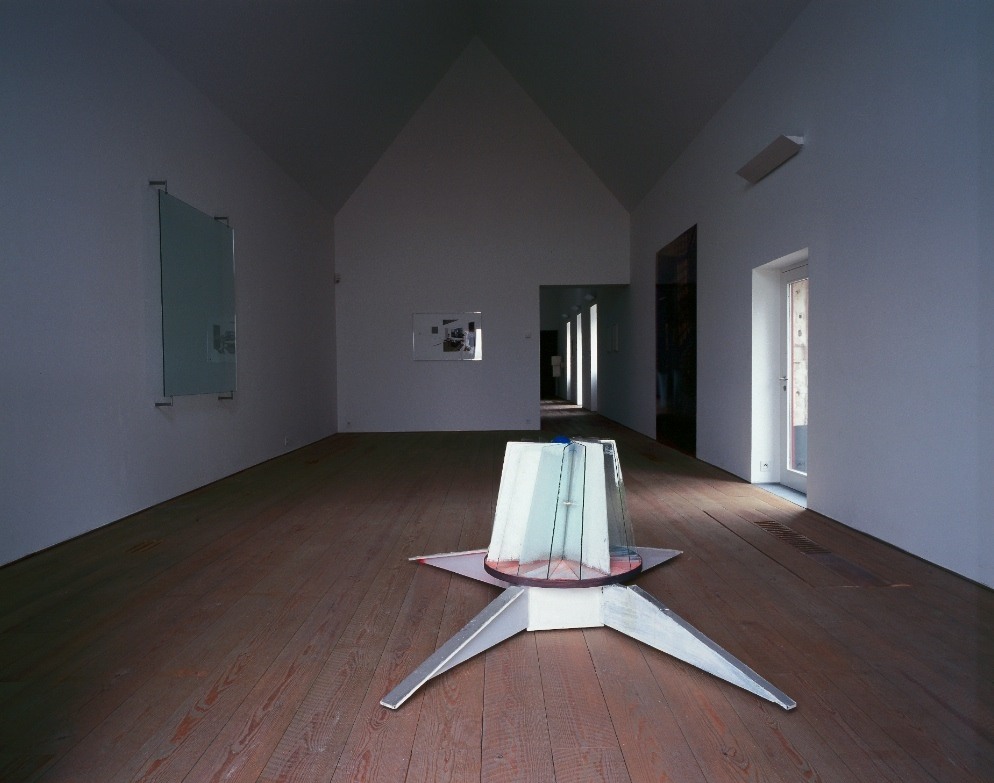 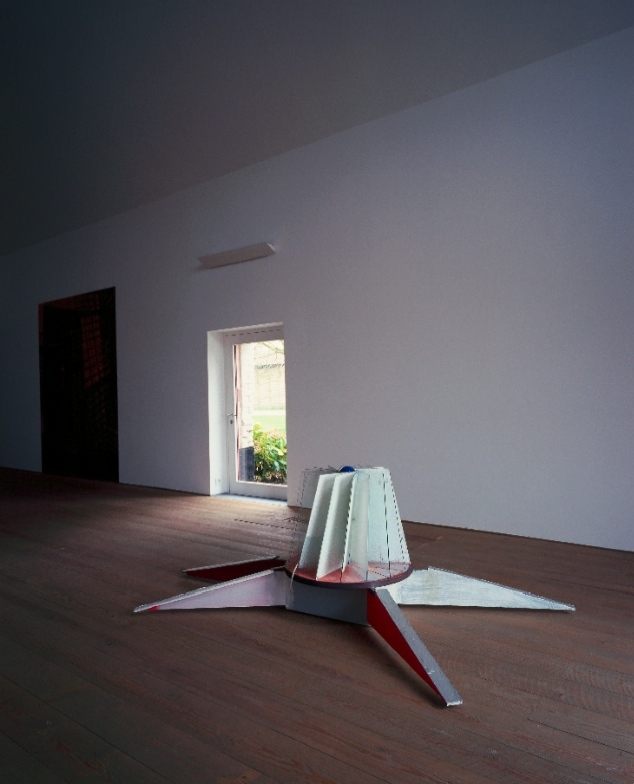 The exhibition is constructed around a recent mirror/glass object by Gerhard Richter; it consists of a selection of works which might be freely read in the context of this reference work. Given that Richter’s mirror/glass is an ambivalent object which reflects its surroundings, including the spectator, and at the same time offers transparency, the exhibition proposes two groups of works which mutually connect.
On one side, adjoining Richter’s mirror/glass, are some works which develop the idea of the reflection, i.e. of the doubling of the image, with the deadpan expression of the mute, tautological object. However, the transparent glass plane in front of the wall suggests also another relationship between object, spectator and space which could be described in terms of architecture. The mirror/glass might suggest the framing of the wall, a picture which rather than offering something for view is part of a construction, letting the ligt pass onto/into the elements of a building.
It seems tempting to follow this path and to place a few works in the exhibition space which deal with similar topics, at times even picking on the theme of the reflection again.
Dieter Schwarz curator of Da Capo

Richard Artschwager (°1923 in Washington, DC – 2013 in Albany, New York). After receiving a BA in 1948 from Cornell University, New York, he studied under Amédée Ozenfant, one of the pioneers of abstraction. In the early 1950s Artschwager became involved in cabinetmaking, producing simple pieces of furniture. After a ruinous workshop fire at the end of the decade, he began making sculpture using leftover industrial materials, then expanded into painting, drawing, site-specific installation, and photo-based work. Artschwager’s first exhibition took place at the Art Directions Gallery, New York, in 1959, and was followed by the first of many solo exhibitions with Leo Castelli in 1965. Solo exhibitions include Up and Across, Neues Museum, Nuremberg, Germany (2001, traveled to Serpentine Gallery, London); Museum für angewandte Kunst (MAK), Vienna (2002); Kunstmuseum Winterthur, Switzerland (2003, traveled to Kaiser Wilhelm Museum, Krefeld, Germany, and Staatliche Graphische Sammlung, Munich); Painting Then and Now, Museum of Contemporary Art, Miami (2003); Up and Down/Back and Forth, Deutsche Guggenheim Berlin (2003);

Pedro Cabrita Reis (°September 5, 1956, Lisbon, Portugal) is a Portuguese artist. Reis has exhibited widely and participated in numerous international exhibitions, including documenta IX in 1992; in 2003 he represented Portugal at the Venice Biennale. Currently, he is participating in the 10th Lyons Biennale with two large works.

Richard Hamilton (°1922 London – 2011, Northend, UK) was educated at the Royal Academy Schools from 1938 to 1940, then studied engineering draughtsmanship at a Government Training Centre in 1940, then worked as a ‘jig and tool’ designer. He returned in 1946 to the Royal Academy Schools, from which he was expelled for ‘not profiting from the instruction being given in the painting school’ (Hamilton, p.10), then attended the Slade School of Art from 1948 to 1951.
Hamilton was a member of the Independent Group, formed in the 1950s by a group of artists and writers at the Institute of Contemporary Arts, whose symposiums contributed to the development of Pop art in Britain. He was one of the prime practitioners of the critic Lawrence Alloway’s theory of a ‘fine/pop art continuum’. Hamilton interpreted this as meaning that ‘all art is equal – there was no hierarchy of value. Elvis was to one side of a long line while Picasso was strung out on the other side. He was Britain’s representative at the 1993 Venice Biennale.

Cristina Iglesias (°1956, San Sebastián, Spain). She currently lives and works in Torrelodones, Madrid. Throughout her career, Iglesias has defined a unique sculptural vocabulary, building immersive and experiential environments that reference and unite architecture, literature and culturally site-specific influences. Through a language of constructed and natural forms rendered in various materials and ranging from suspended pavilions, latticed panels, passageways, and mazes, to walls imbued with texts and structural and vegetative forms, she poetically redefines space by confounding interior and exterior, organic and artifice, combining industrial materials with natural elements to produce unexpected new sensory sites for the viewer.
Irish Museum of Modern Art, Dublin (2003); Whitechapel Gallery, London (2003); Museum Serralves, Fundaçao Serralves, Oporto (2002); Guggenheim New York (1997); and Guggenheim Bilbao, Spain (1999).
Iglesias has participated in a number of international exhibitions and public commissions and has represented Spain at the 1986 and 1993 Venice Biennales

Sherrie Levine’s (°1947 in Hazleton, Pennsylvania) work engages many of the core tenets of postmodern art, in particular challenging notions of originality, authenticity, and identity. Levine rose to prominence as a member of the Pictures Generation, a group of artists based in New York in the late 1970s and 1980s whose work examined the structures of signification underlying mass-circulated images—and, in many cases, directly appropriated these images in order to imbue them with new, critically inflected meaning. Since then, Levine has created a singular and complex body of work in a variety of media (including photography, painting, and sculpture) that often explicitly reproduces artworks and motifs from the Western art-historical canon.

Vaclav Pozarek (°1940 in Budweis, in what is now the Czech Republic). He studied film and subsequently moved to Hamburg and London (1969 – 1972), where he studied under Anthony Caro at the Saint Martin’s School of Art. His interest in Concrete art, and the work of Richard Paul Lohse in particular, drew him to Switzerland, and the city of Berne (1973), where he still lives today. There, he developed a unique synthesis of the principles of Constructivism and the application of the arts to everyday reality. Pozarek focuses principally on sculpture and drawing, but he has also produced installations, photography and film. He often designs artist’s books and logos for his solo exhibitions.

Gerhard Richter (°1932, Dresden). Lived in Dresden until 1961, studying first at the Kunstakademie, Dresden from 1951-1956, and then at the Kunstakademie in Dusseldorf, from 1961-1963. Richter is considered one of the most important painters working today and his large and varied body of work has gained much international acclaim over the past five decades. Throughout his prolific history he has explored painting through a rich and diverse range of ideas that has spanned realist works based on found images and photographs, abstractions made with a squeegee, two and three dimensional glass works, abstract drawings, and overpainted photographs from images of daily life. His work has been immensely influential to multiple generations.
He has been the recipient of numerous distinguished awards, including the Staatspreis of the State Nordrhein-Westfalen, Dusseldorf, in 2000; the Praemium Imperiale Award, Japan, 1997; the Golden Lion of the 47th Biennale, Venice, 1997; the Kaiserring Prize der Stadt Goslar, Germany, 1988; and the Oskar Kokoschka Prize, Vienna, 1985.

Thomas Scheibitz (°1968, Radeberg, Germany). Currently lives and works in Berlin. He is a painter and sculptor. Together with Tino Sehgal he created the German pavilion on the 51st Venice Biennale in 2005.