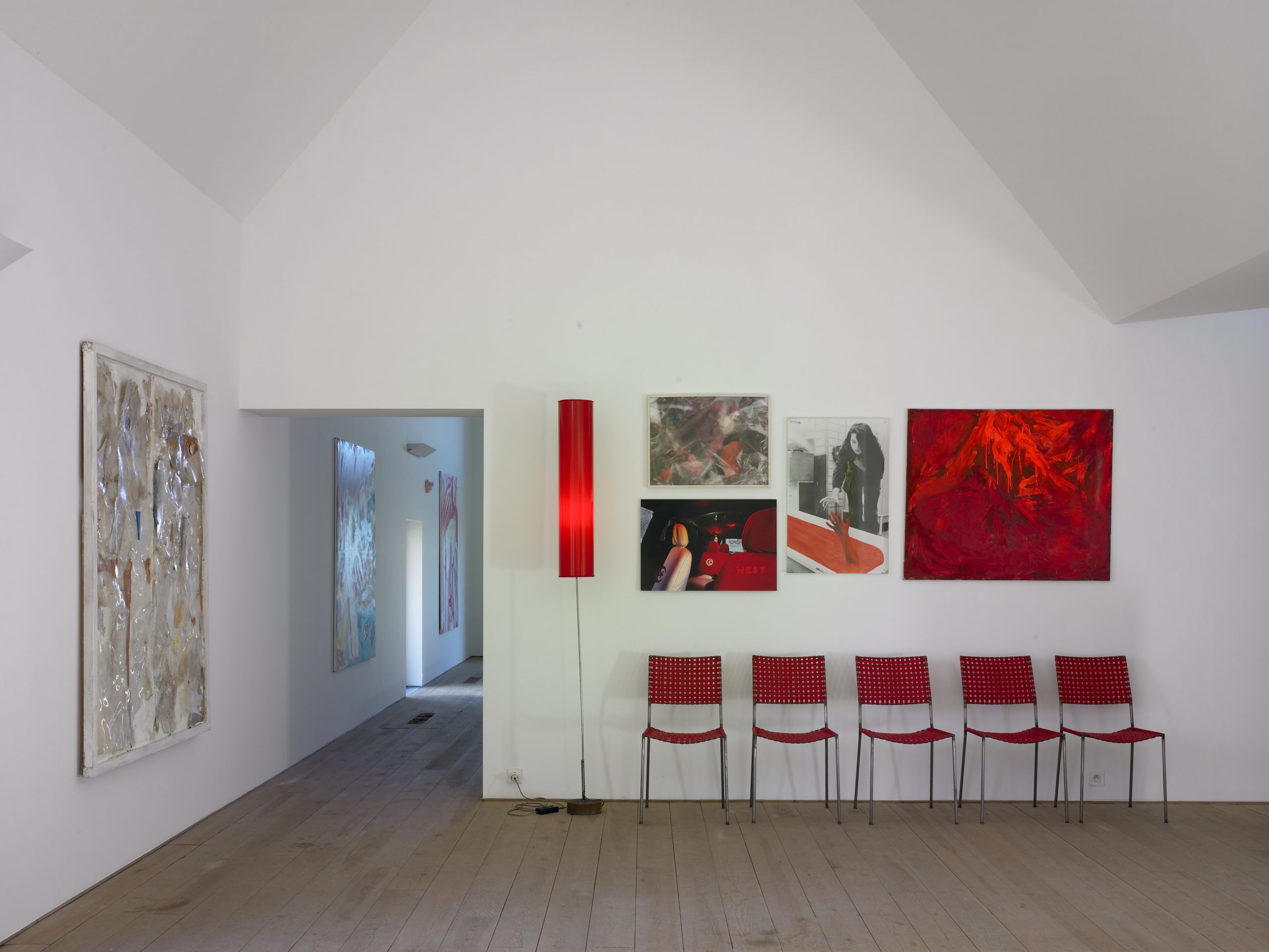 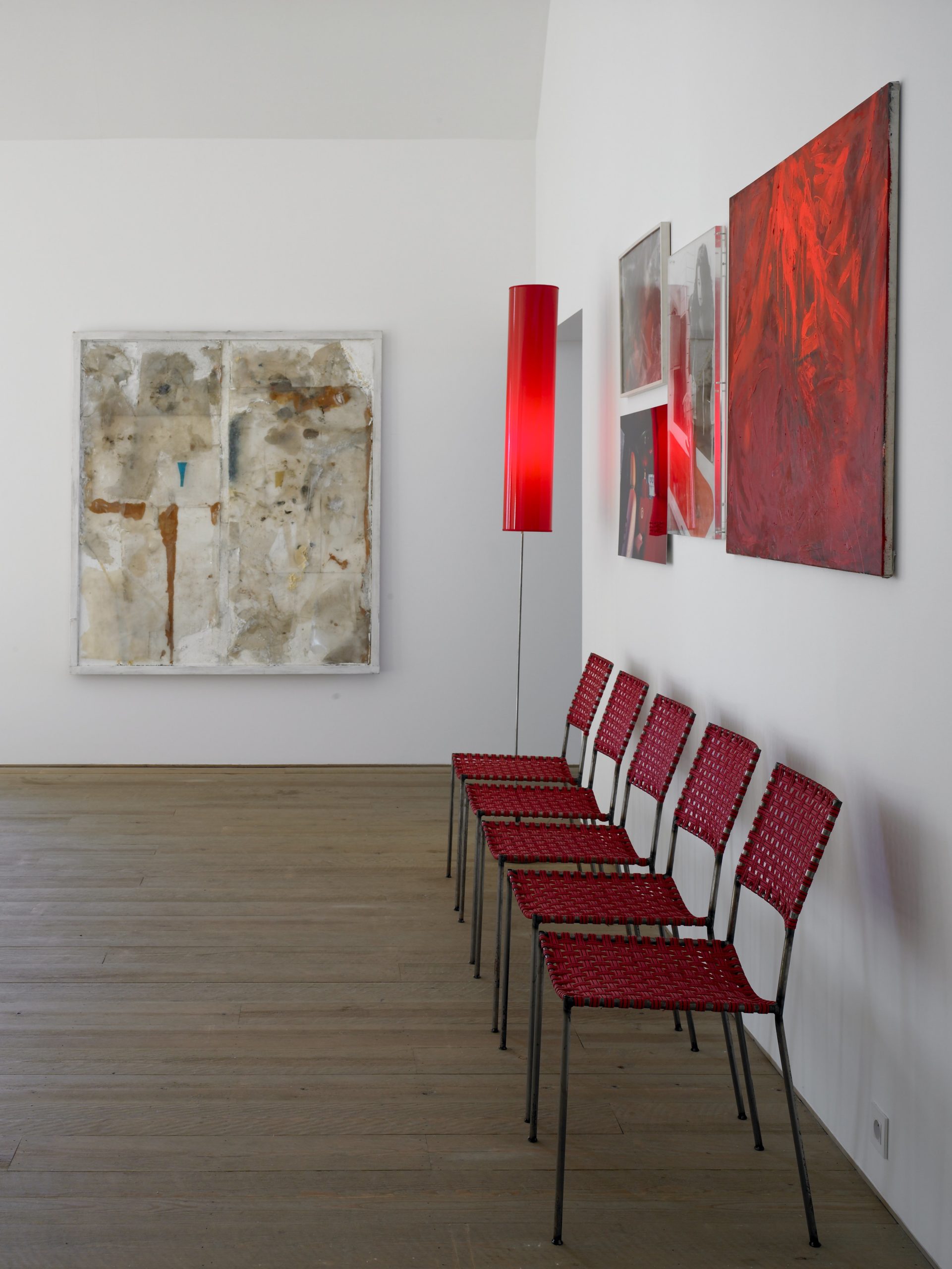 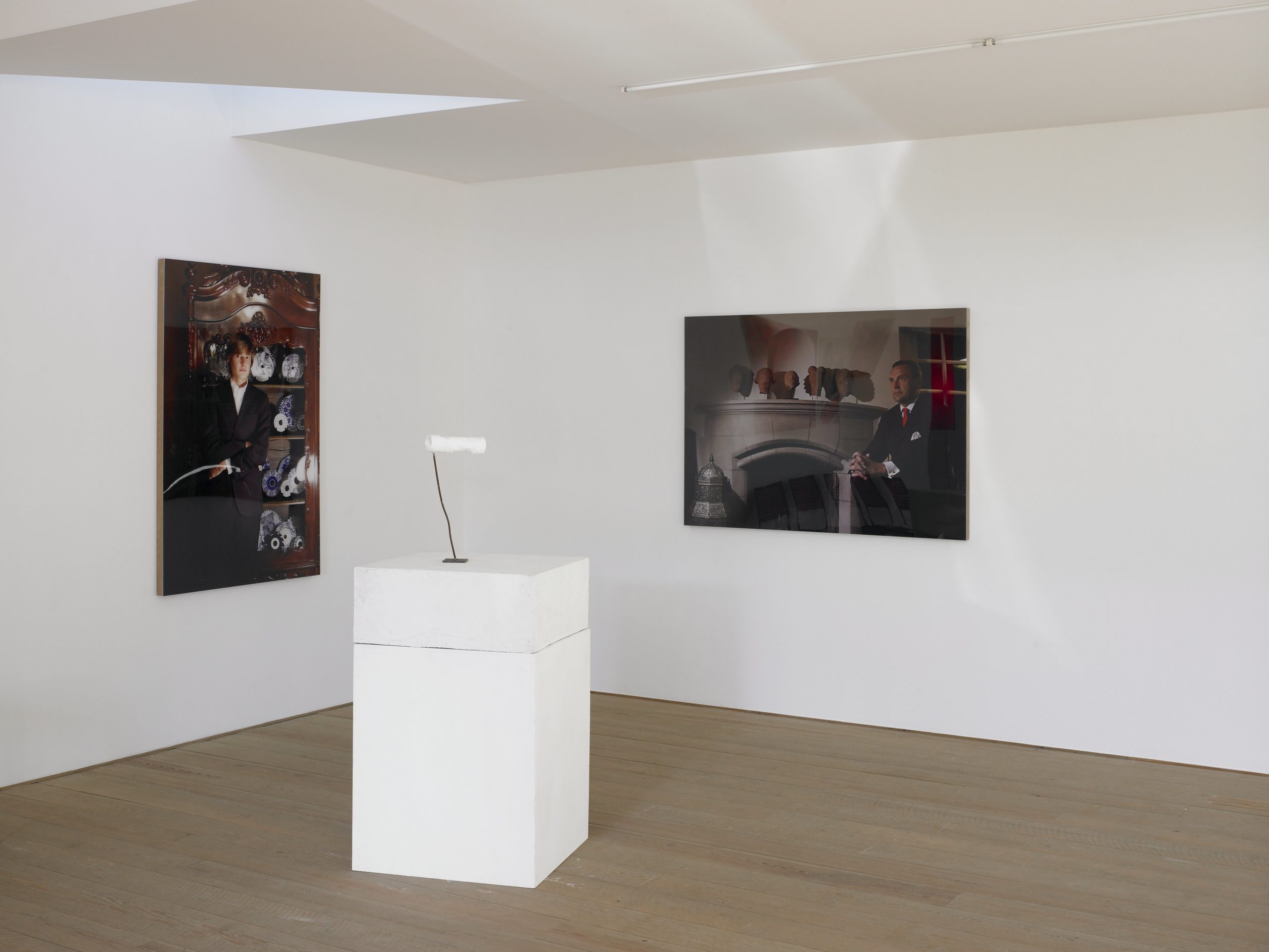 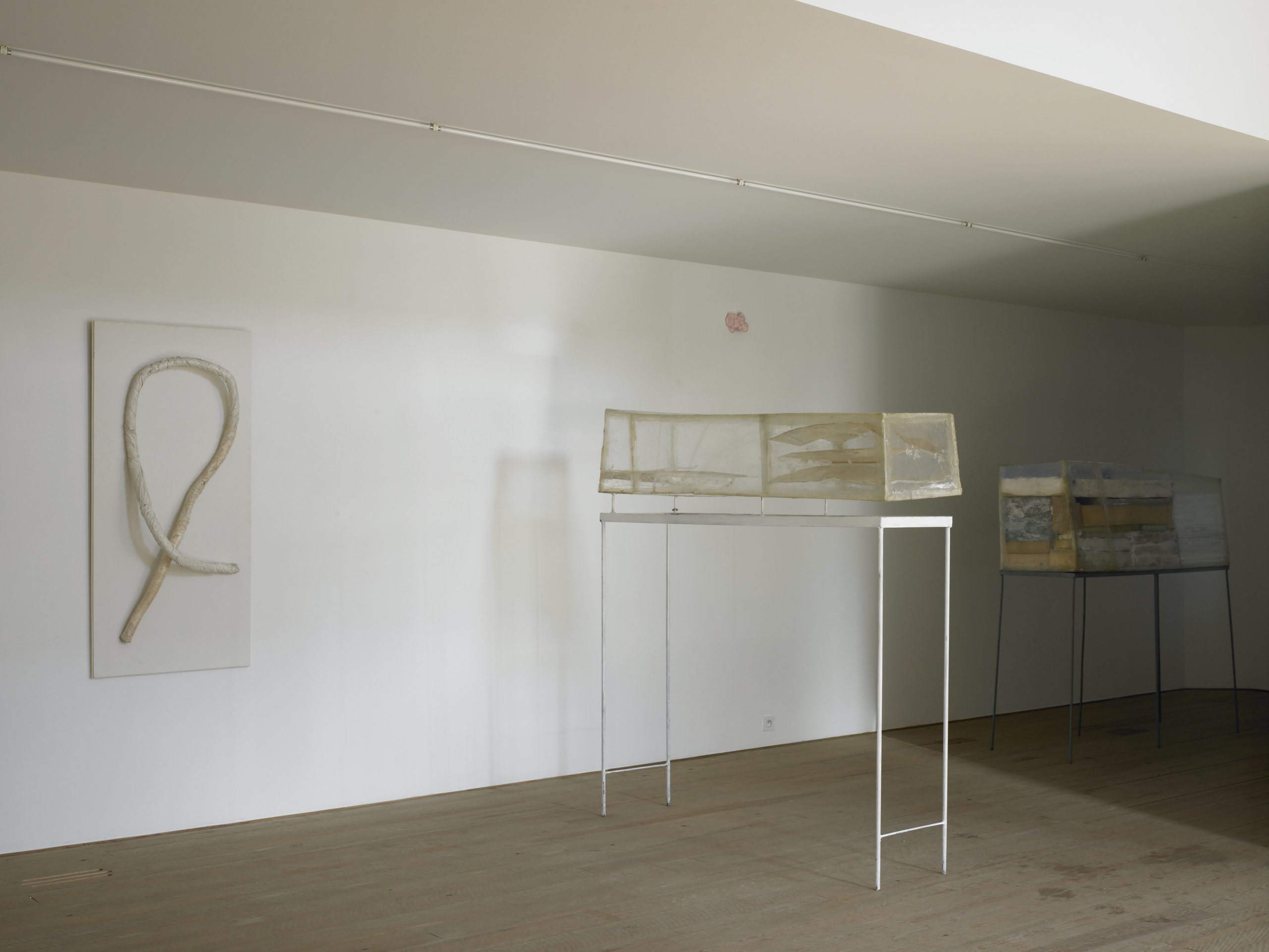 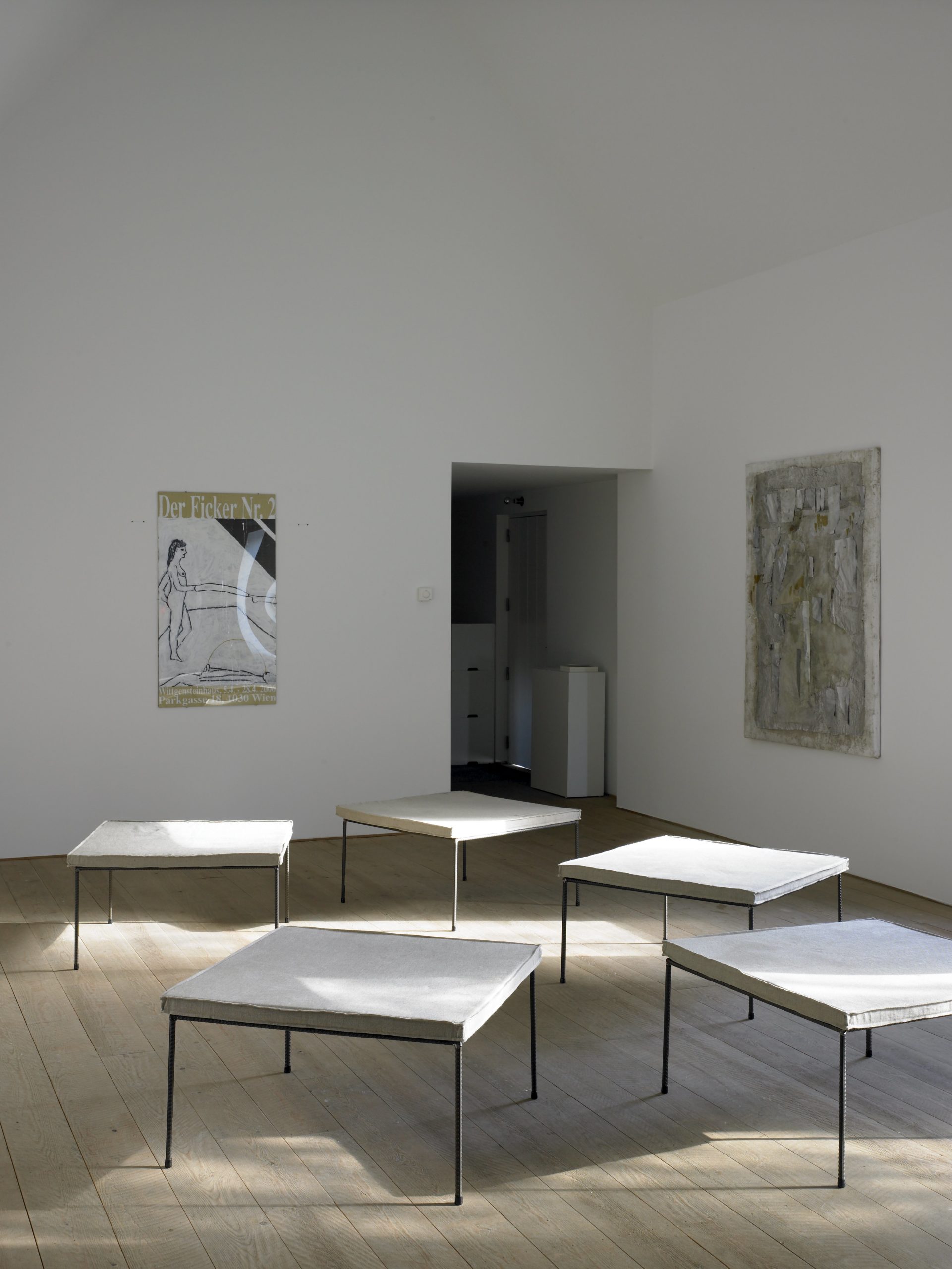 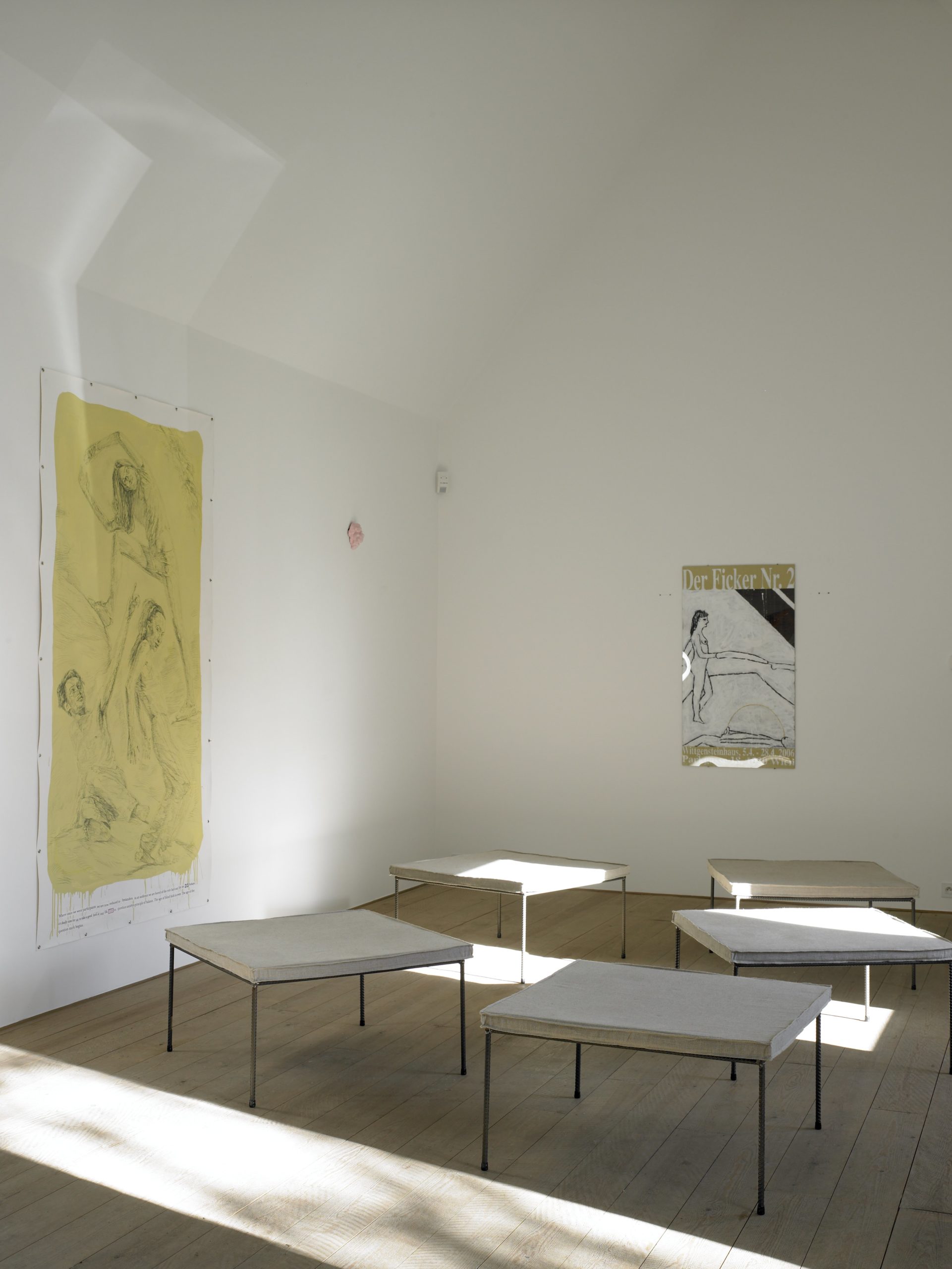 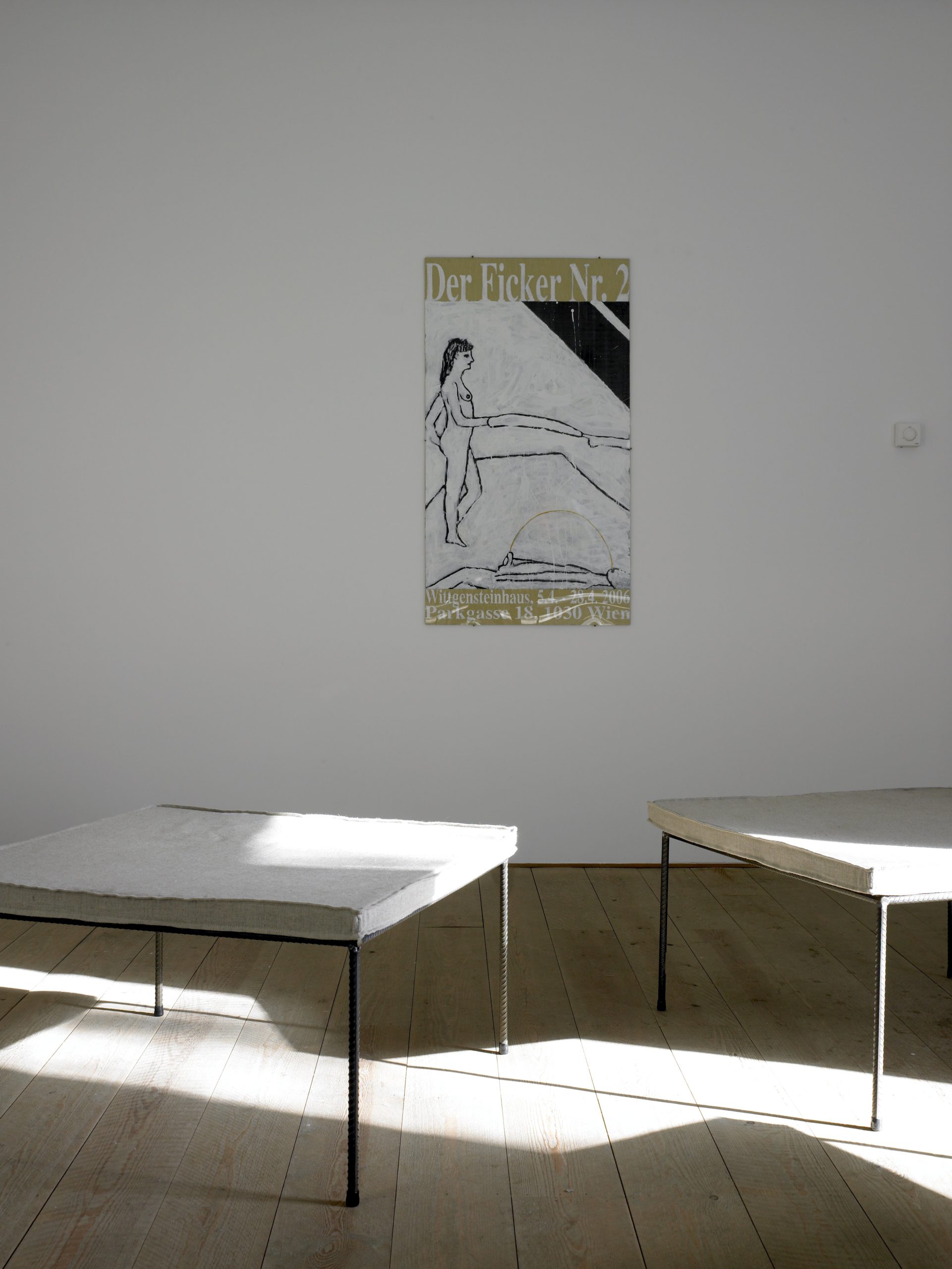 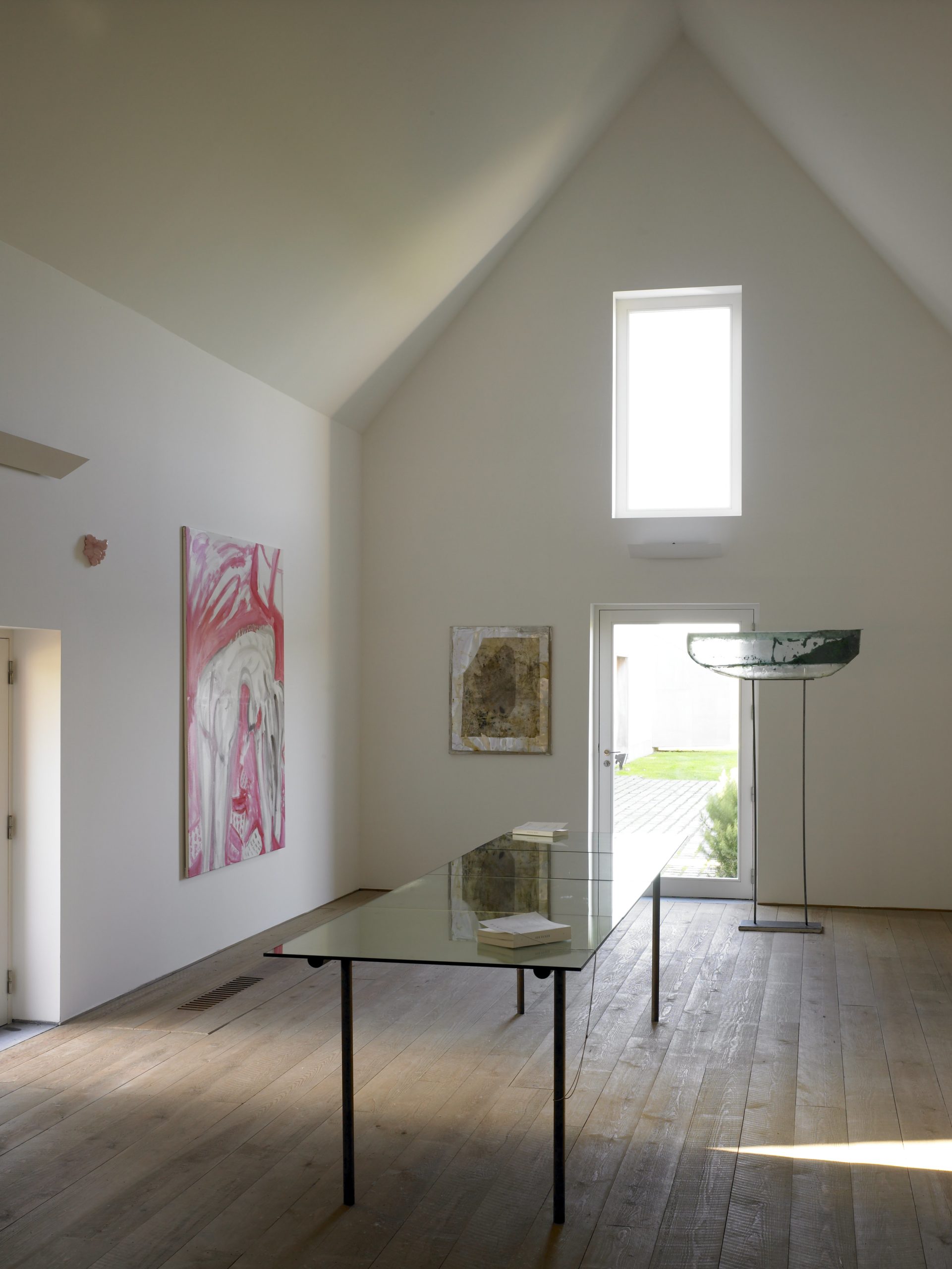 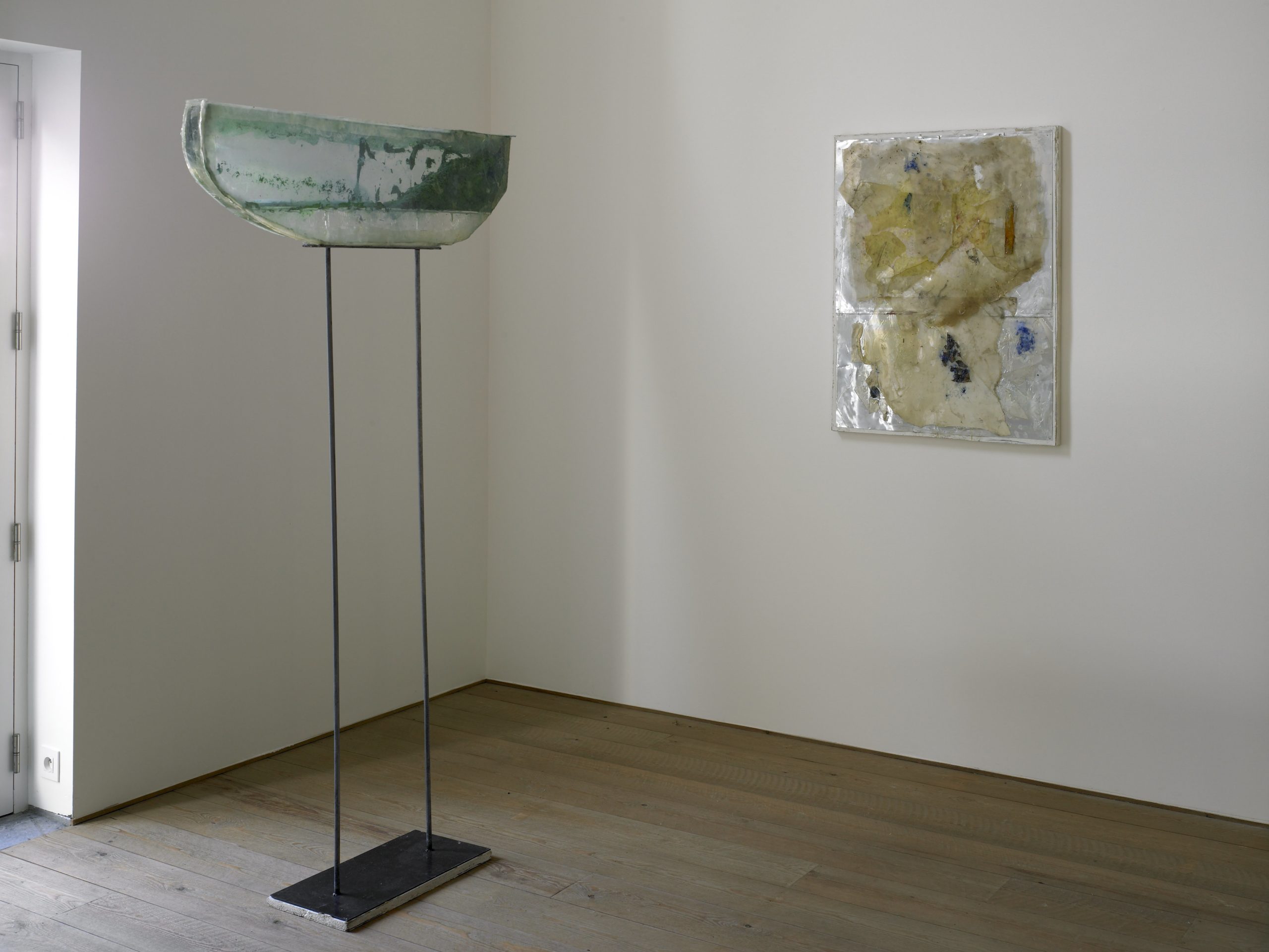 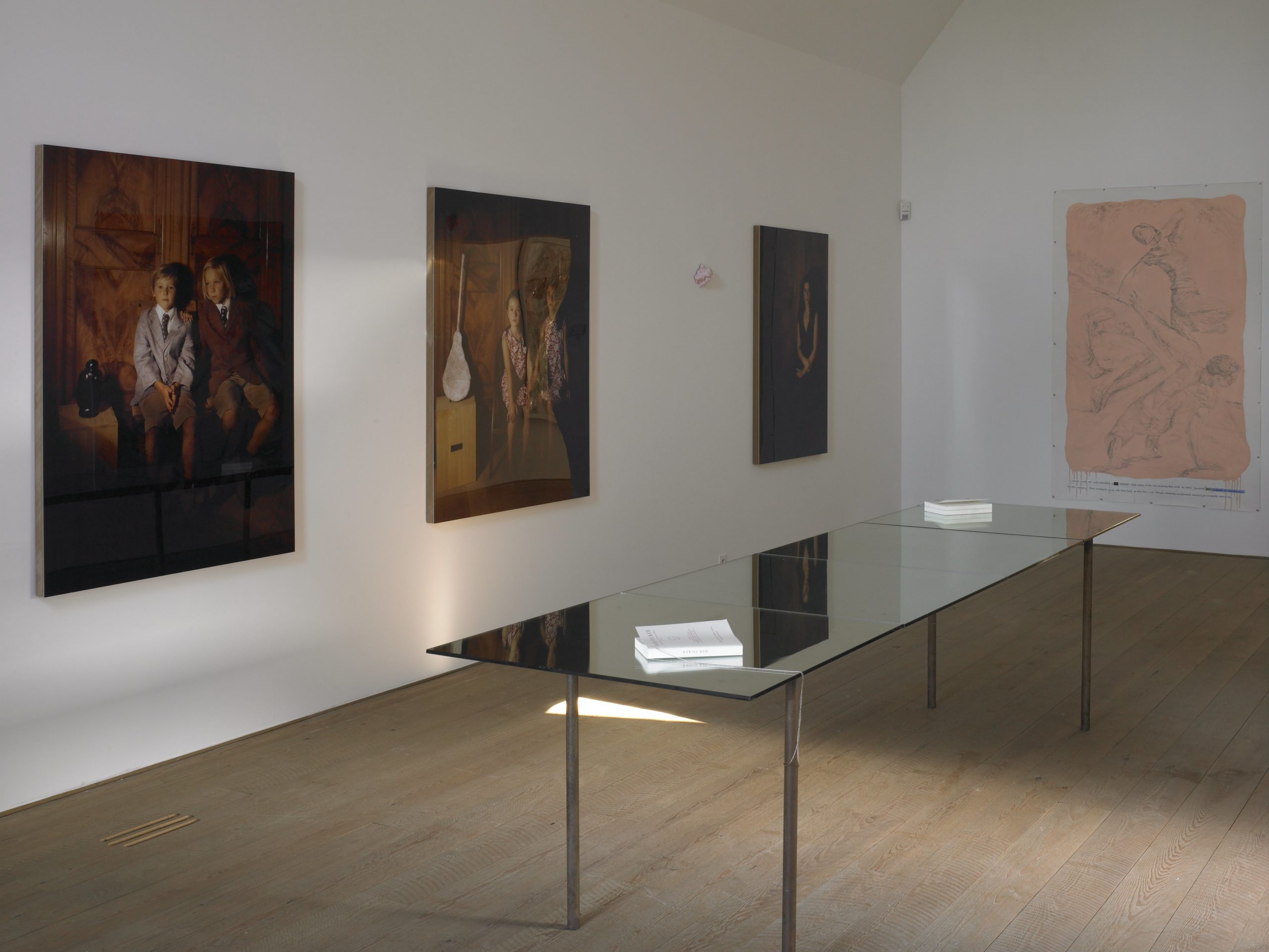 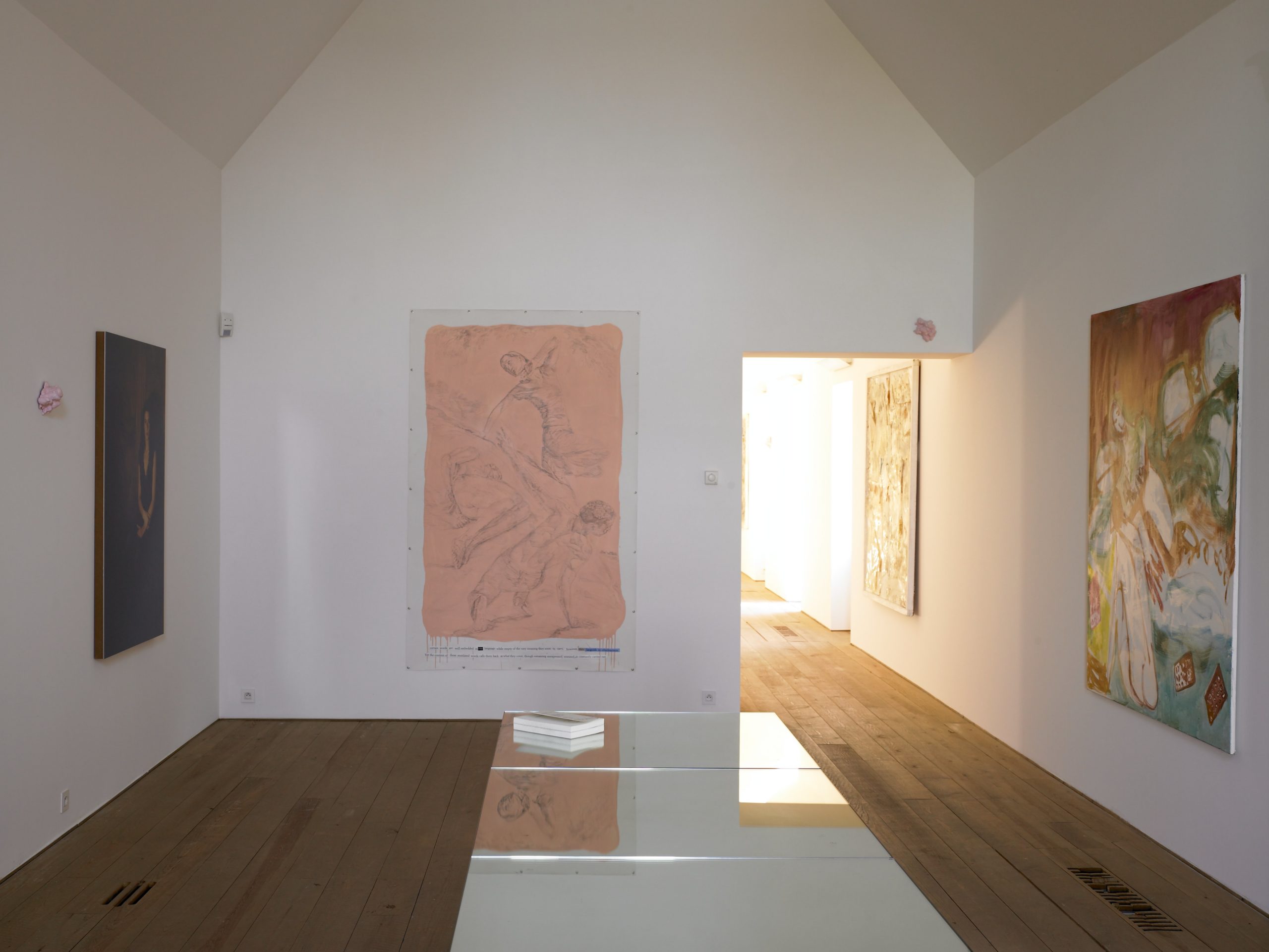 In 2005, Franz West initiated together with Clegg & Guttmann, Rudolf Polanszky and Benedikt Ledebur the Exhibition “Der Ficker” in Innsbruck, named after Ludwig von Ficker, who with his art-magazine “Der Brenner” linked fine arts, philosophy, poetry and architecture in the first half of the 20th century. This Exhibition was shown also in 2005 at the “De 11 Lijnen” in Oudenburg. A second exhibition took place 2006 in the Palais Wittgenstein in Vienna, the group of artists enlarged by Tamuna Sirbiladze and Muntean/Rosenblum, accompanied by the philosophical lectures and poetry-readings.
The different positions of the artists, the different areas of art and the relations between them form a living organism, which to analyze would mean to do the job of a butcher. Nevertheless the connections show themselves and start their interplay with the architectural surroundings in Oudenburg as they did in the Wittgenstein-house in Vienna. Thus the group – Clegg & Guttmann, Benedikt Ledebur, Rudolf Polanszky, Johannes Schlebrügge, Klaus Thoman, and Franz West – have extended their circle since the first “Ficker” a year ago, invited other artists and authors, brought about a new exhibition, further literarily, art historical and philosophic contributions, as well as a new publication: Der Ficker second series.

Michael Clegg (°1957 in Jerusalem) and Martin Guttmann (°1957 in Dublin) live in New York and Vienna. They started their collaboration in 1980. Since then, they have had hundreds of exhibitions in U.S.A., Germany, France, Italy, Austria, Japan and in other countries. Their work is in the collection of the Whitney Museum, the Beaubourg, the Stadtgalerie Stuttgart to name a few. They took part in the documenta, the Whitney Biennial, the Venice Biennale and in other international exhibitions. During the years they made a large number of outdoor artworks, most recently in Hamburg, Berlin ans Krems (Lower Austria). Solo exhibitions 2006: Secession, Vienna, Kunstverein Braunschweig, Cornerhouse Manchester.

Rodulf Polanszky (°1951 in Vienna). He spent his childhood and youth in Vienna and all over Austria. Since 1971 he has lived mainly in Vienna and nearby. Besides various studies and travels, his interest lies in art and its theoretical aspects as well as in problems of permanent self-invention. Since Schweinsfettzeichnungen [lard drawings] and the film Zu einer Semiologie der Sinne [On a semiology of the senses], both in 1976, he has worked as an artist; few public appearances, apart from which he is a private individual.

Franz West (°1947 in Vienna) lives and works in Vienna. West, without a doubt, is one of the most important artists of our day and age. For three decades now his oeuvre has had a significant impact on the development of contemporary art.
Most characteristic for West’s modus operandi are his Passstücke (Fitted Pieces), produced for the first time in 1974, the Möbelskulpturen (furniture sculptures) from 1985 onwards, and the Aluskulpturen (aluminium scupltures) since 2000. A sculpural element is turned into an object only made complete by its being used, as it were. West thus introduces a new definition of the term sculpture. He contrasts the autonomous, self-contained work we are familiar with from art history with the interactive instrument ultimately, and each time anew, finished as a work of art by the observer/user handling it.
Since 1970 international exhibitions in galleries and museums, e.g. Documenta IX (1992), Documenta X (1997), Sculpture Project Münster (1997), Venice Biennial (1988, 1993, 1997, 2003); Lincoln Center & Doris C. Freedman Plaza, New York (2004), Whitechapel Gallery, London (2003), Museo Nacional de Arte Reina Sofia, Madrid (2001), Museum of Modern Art, New York (1997). From 1997 onwards in close cooperation with the Gallery Elisabeth & Klaus oman, Innsburck: Franz West – Stühle für die documenta X (1997), Sculptura Austriae (1998), Franz West Die Alu- skulptur, Skulptur im Schlosspark Ambras (2000), U.A. West (2000), Best of (2001), Unter freiem Himmel, Skulptur im Schlosspark Ambras (2001/02), Franz West Meublage/Musique de Meublement (2002), Der Ficker: Clegg & Guttmann, Rudolf Polanszky, Franz West (2005).